Thread to capture images and stories from this weekend’s RoF adventures.

The fighting is fierce here on the Western Front.

@EinsteinEP, @Kombat_Karl, and myself flying German aircraft were orbiting the Allied Airfield, defended boldly by @Tankerwade and Bigfoot (I think?). We turn in and dive for speed when the call comes (perhaps our pilots are exceptionally good at sign language, or have experimental walkie-talkies) “BANDITS, TWELVE O’CLOCK HIGH!”

After a short but exceptionally violent dogfight, one of the Allied planes is forced to attempt a landing and mercilessly finished off by Karl, while Einstein attempts a point-blank, close-in kill on Tanker. The two end up trading ailerons. Much to my horror, I was only able to capture the result, not the incident. 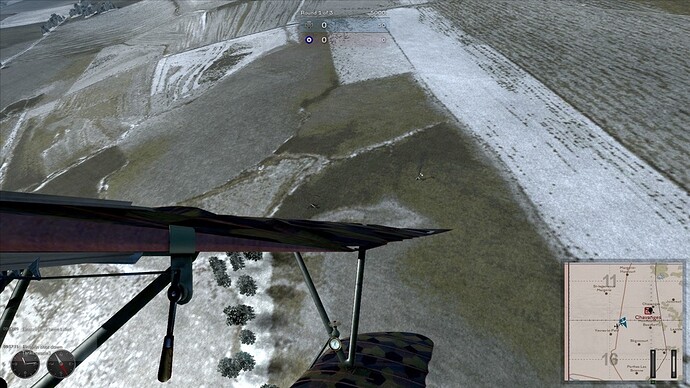 @TheAlmightySnark, @Maclean, and @EinsteinEP take off in their Handly-Pages. The objective? Bomb the @&#$ out of the enemy airfield. @Tankerwade and @Kombat_Karl prepare to ascend and do their best to stop the attack. Meanwhile, I hop into the rear-gunner slot of Snark’s bomber. 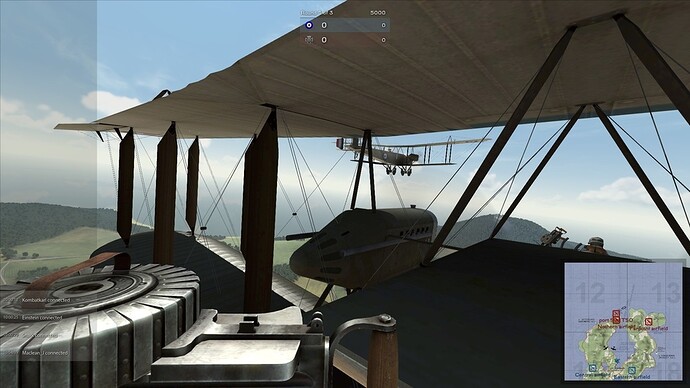 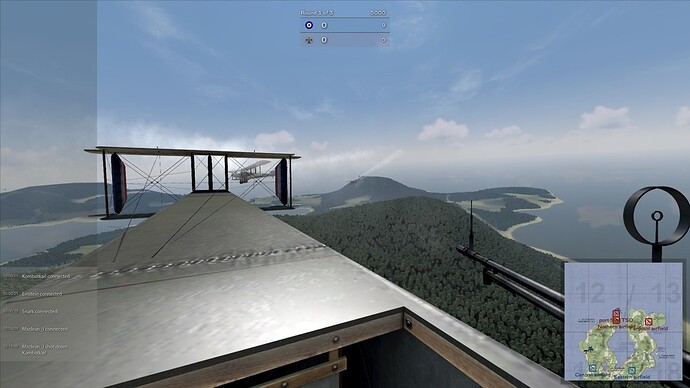 Wave one of the aggressors is repelled. I decide to swap teams to see how it is! Fortunately for me, I take-off just in time to miss getting bombed to oblivion. Snark rapidly turns around, shouts, “BANZAI!” and attempts to add to the damage dealt. Unfortunately, he is unable to counter the HP’s ludicrous amounts of lift and overshoots the target, crashing into the woods. 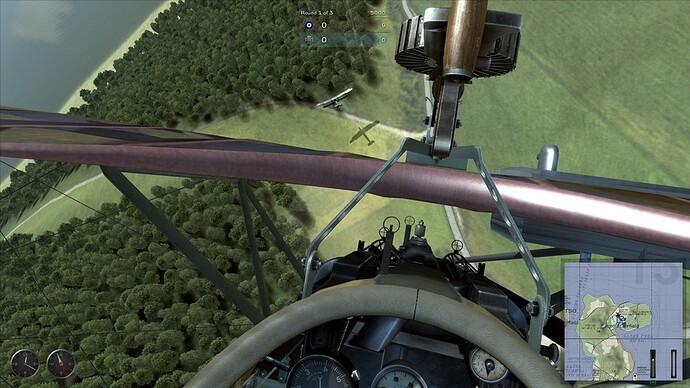 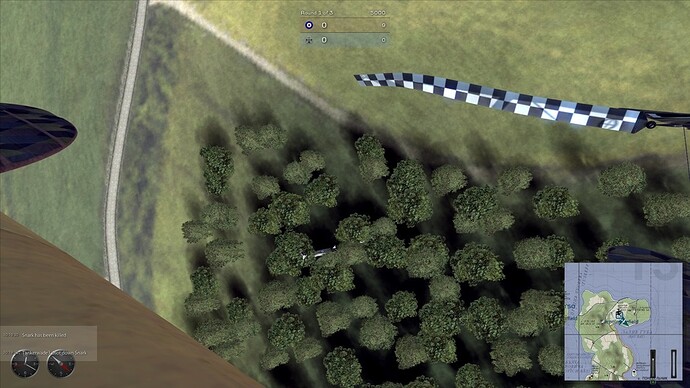 Maclean at some point during this mess is shot down? Either way, only Einstein remained! Karl and I proceed to dog him, which, in Karl’s case, means gently ramming into the plane’s rear half and causing the plane to do a near 180-degree flip. 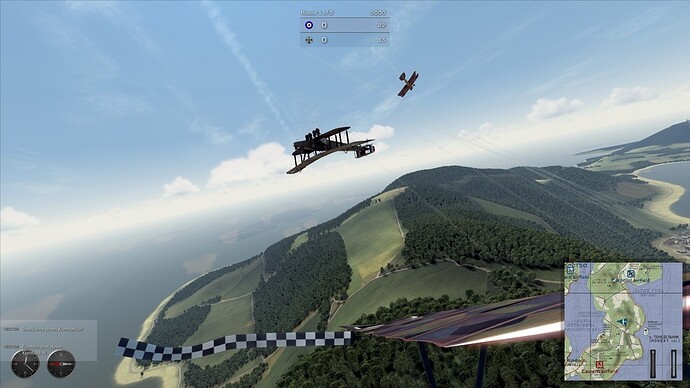 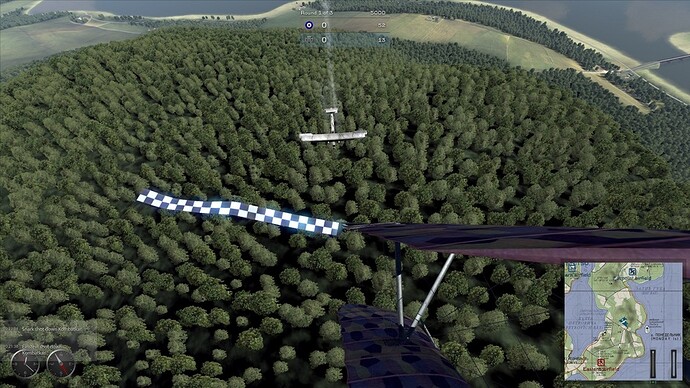 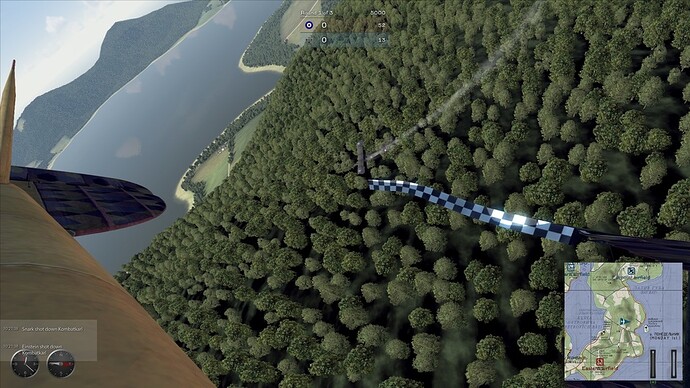 Einstein manages to recover the bomber with absolutely no altitude to spare! Unfortunately, shortly thereafter while attempting an upwards-cutting attack on the Page’s left engine at extreme close range, my aircraft’s nose smashes into their wing, thoroughly ending the fight (and the lives of everyone involved). Whoops!

Come join in the next session in a few hours!

In that last mid-air collision in round 1, Tanker was doing his best to throw off his trailer (moi) and I just didn’t consider how deep in desperation I had driven my obviously harried foe. Given that we were just a hundred feet over the treetops, I was expecting my prey to throw off a snappy barrel roll or yo-yo to try and start a rolling scissors, but he went straight for a hammerhead/split S. Misreading his intentions, I thought I was setting myself up to flop back into his turning circle, but instead I cut through his upper spar with disastrous results.

The situation went from this: 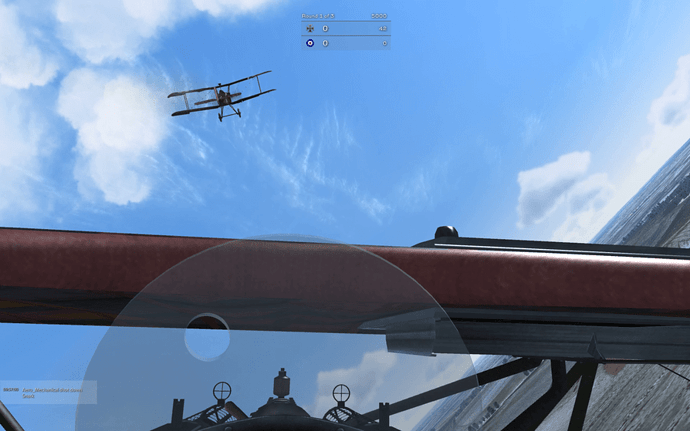 To this in just a few seconds: 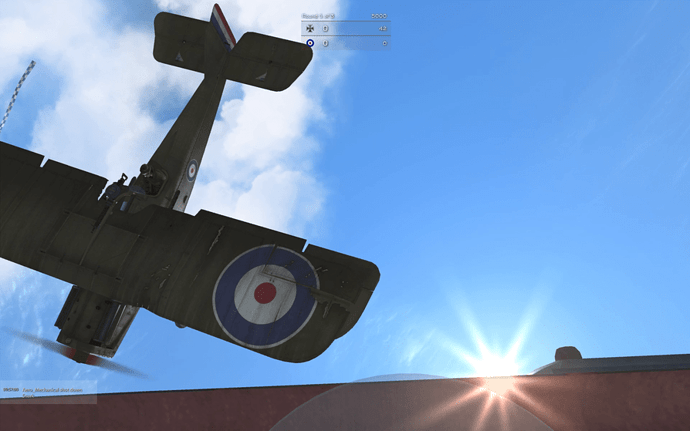 Interestingly, this was the second time this occurred that session! Here’s a close-up of Bigfoot just before we swapped fabric: 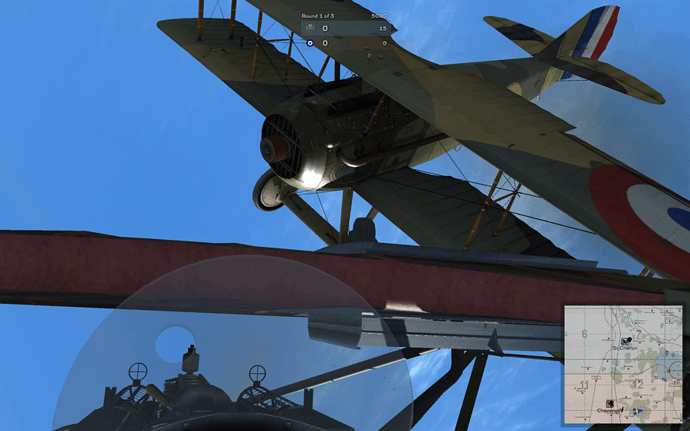 The situation was the same, a low altitude chase where enemy tried a last-ditch maneuver to throw me off their tail. In this case, Bigfoot pitched up and tried a hammerhead stall reversal and I was gunning for the cockpit, expecting him to barrel roll, not swap nose for tail.

The bombing run was great - three Handley Pages in formation, and we DESTROYED that enemy airfield in the one pass! The return flight was rough, with both @Kombat_Karl and @AeroMechanical trying to ram my flying hotel. When the HP got inverted, I was feeling a little less than optimistic, but was extremely pleased to have regained control a decent distance above the treelines. In fact, I was on a decent approach when you rammed me, Aero! I would have made it home, too, if it weren’t for you meddling kids!

Later in the day @Maclean, @TheAlmightySnark, and I had a hankering for a bomber run, but the available servers didn’t have a Handley Page available, so Maclean and I hopped into our separate Gothas while Snark jumped into my front gunner’s position. Luckily the mission was an airstart so we didn’t have to practice our adverse-yaw takeoffs over and over. 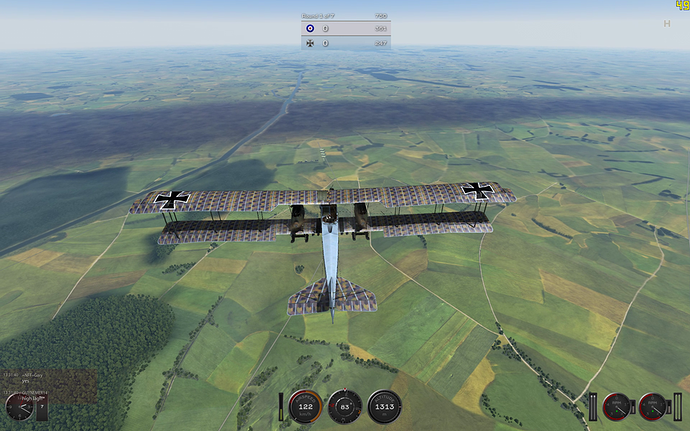 The lead bomber – moi – couldn’t get the level autopilot working, so the bomb run was aborted and had to make a second run, which was much more successful.

Snark, from his vantage point in my nose, was of immense help getting lined up. The RoF implementation of the bombsight doesn’t allow you to slew up to look forward and ensure you’re on the right path. 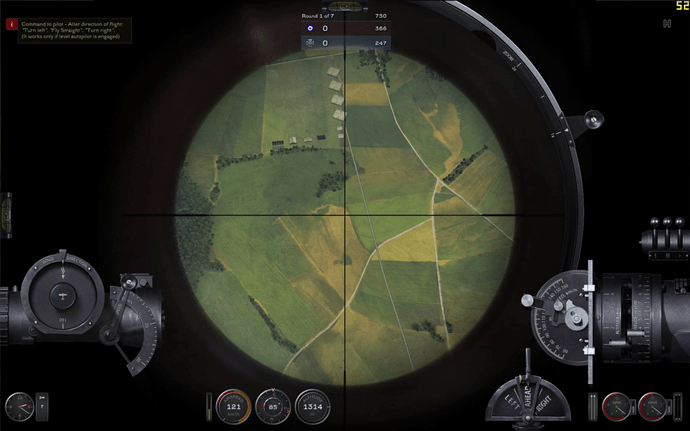 Once the target hits the crosshairs, Maclean and I simultaneously start dropping our bombs. 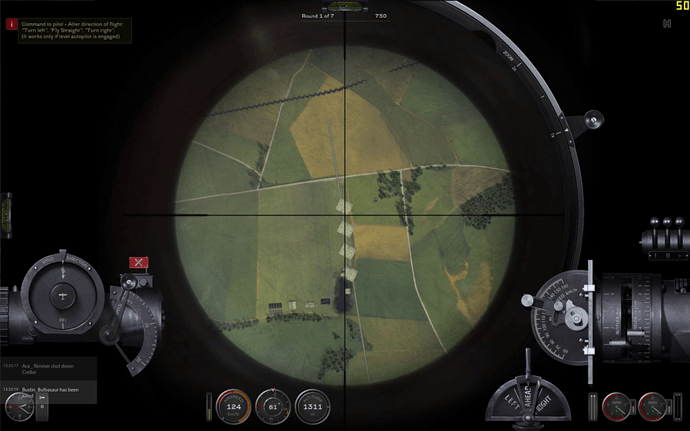 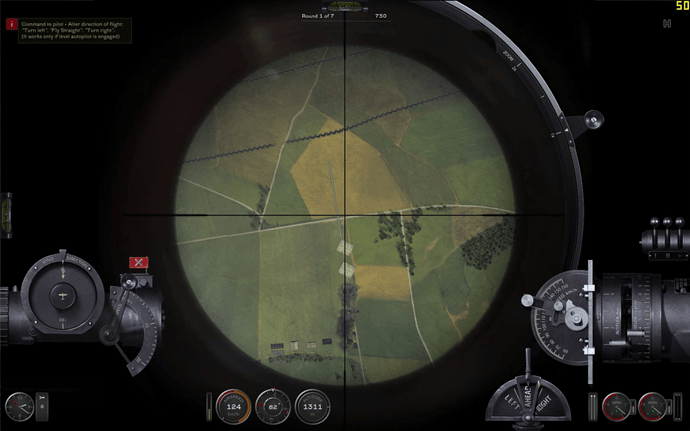 …but the remaining bombs murderize the hangars.

The Gotha’s loadout was about half of what I was expecting, otherwise we would have decimated the entire row of hangars, but I was still pleased with the results.

Mission complete, Maclean and I return home, with Snark keeping a wary eye out for banditos. 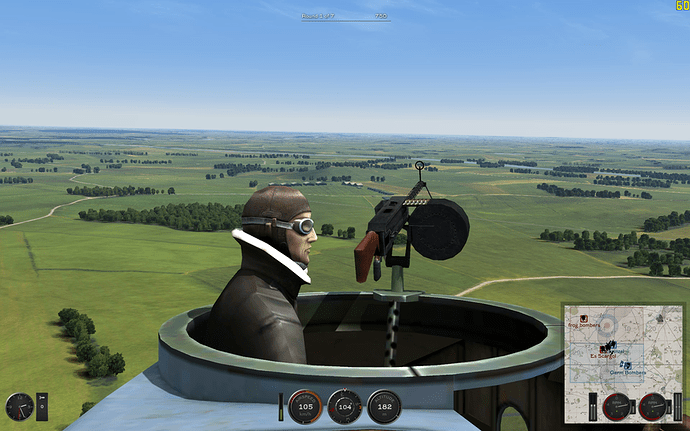 The real challenge of flying the Gotha is the severe adverse yaw at slow speeds. The drag on the ailerons is so severe that a little bit of aileron produces a lot more opposite yaw than bank. Knowing this, a wise Gotha pilot uses gentle application of opposite aileron to control heading during takeoff and approach. Both Maclean and I did a good job with the yaw… 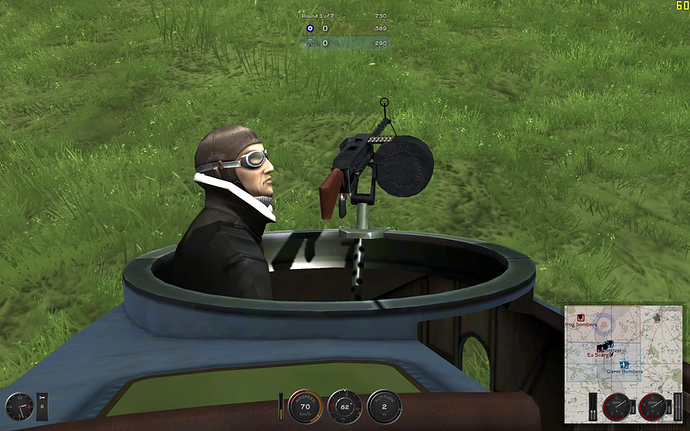 While lamenting my misfortune – and listening to @TheAlmightySnark cackle about my supposedly superior flying capabilities – @Maclean smashes into the treetops behind me, serediptously captured in the background of this screenshot here. 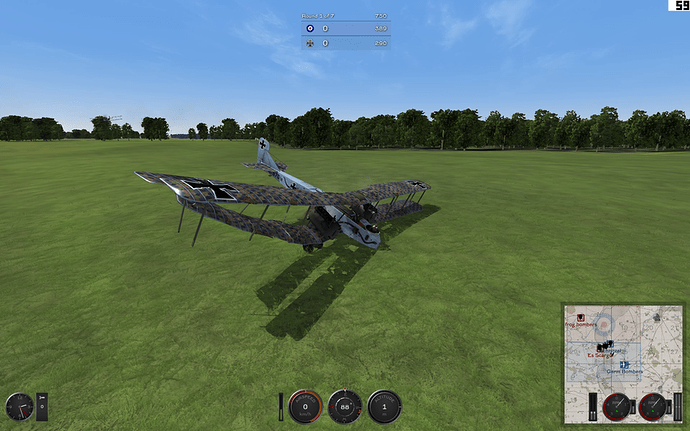 While the landing was less than spectacular, the mission was a complete success!

Love your stories and screens!
I was too busy learning the game and the planes to take any pictures.

I can clarify the confusion around the mysterious appearance of Bigfoot on our server: that’s me.

I love Rise of Flight and the wiggly feel of the slow planes, thanks for organizing this @AeroMechanical (and/or @EinsteinEP ?)
My only kill so far was the collision with Einstein, where we both died, but that was an accomplishment: he had been on my tail for a while, so I had already accepted my fate.

My default sim and Teamspeak callsign is Bigfoot. For a fly-in I change this to Freak in DCS and Teamspeak, but I forgot this time. I will add a profile picture on Mudspike to reflect my call sign. Suggestions can be sent via PM.

So, now for the TL;DR version of this thread.

Everyone crashed into everyone.
No one survived.
There was much rejoicing.

Very correct Karl, although isn’t that the TL:DR of anything we do?