A Cosmonaut on the Moon

I knew of the overall competing program but not any of the details like this. There is something about that Soviet era aesthetic that is fascinating… 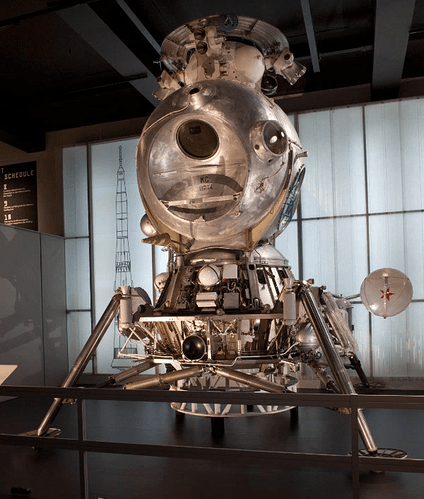 On May 25th 1961 President John F. Kennedy took to the floor of Congress and announced that the United States would land a man on the Moon and return him safely before the decade was out. As he spo…

"The Premier was also considering overtures made by President Kennedy
towards a joint US/Soviet lunar mission. Such a venture would prevent
either side from losing political face whilst reducing the financial
burden. Sadly, Kennedy’s assassination put an end to any further
discussions, meaning either the Soviet Union would have to go it alone
or concede the first lunar landing to the Americans."

I knew it…! NASA assassinated Kennedy!

"Unlike the Apollo CSM/LM complex, the L3’s LOK/LK had no internal
tunnel for crew transfer. Instead the Commander would need to carry out
an EVA, exiting the forward section of the LOK and transferring back
along the length of the craft using handholds and an extendable pole
before entering the LK’s protective fairing and then the LK itself. At
this point, the fairing would detach and the LOK could move away while
the LK with BLOK-D still attached would begin its journey down to the
lunar surface."

Although I know all motion is relative…that sounds terrifying…LOL. Sandra Bullock would consider it a walk in the park however…

“On January 14 1966, Sergei Korolev died as a result of serious complications while undergoing abdominal surgery.”

"70 seconds into the flight the KORD system shut down all of the BLOK-A
engines and 3L sailed on to a crash some 50km from the launchpad. The
emergency rescue system safely recovered the dummy descent section, but
it was a disappointing start for the N-1."

"The booster slowly settled back onto the pad causing the largest manmade
non-nuclear explosion on record – the equivalent of 250 tons of TNT."

Anyway…damn shame it never made it. Planetary landings are cool regardless of who does them. Can’t wait to see if China manages to pull of a lunar flight.

The ‘one man landing’ scenario was interesting too. Given all the unknowns at that point, plus the fact that their LEM had a single descent/ascent engine(!) gave it such a ‘Ah, I die on the moon for the glory of soviet homeland!’ vibe.

Actually Yo-Yo sent me some pictures of a Russian hospital a while back, pretty sure it wasnt NASA that killed him

“On January 14 1966, Sergei Korolev died as a result of serious complications while undergoing abdominal surgery.”

After watching four ascent vehicles blow up in various stages. I think I’d volunteer to be the second guy on the moon. Let that first guy work out the kinks…

It’s a nice remnicent through the space race. You can play as either side or ESA

Very nice @Sargoth - will check it out.