I fly gliders about once every two years just to remind myself that flying is not about prop noise and roll-rate. I may think I can fly gliders but I don’t SOAR. I have never even been out of gliding range of my airport. The AAR below is by Daniel, a guy in our club who soars like no one I have met. He’s barely 20. Like many purist glider pilots he is something of a flying genius. In the 50 year history of the venerable little 1-26, no one has recorded a 1000km flight in one (officially). Daniel laid siege to the idea for a year, studying seasons, weather and polar curves–and he did it. Relative to that historic feat, the 8 hour flight he describes below is just an unplanned milk run, but a good read… 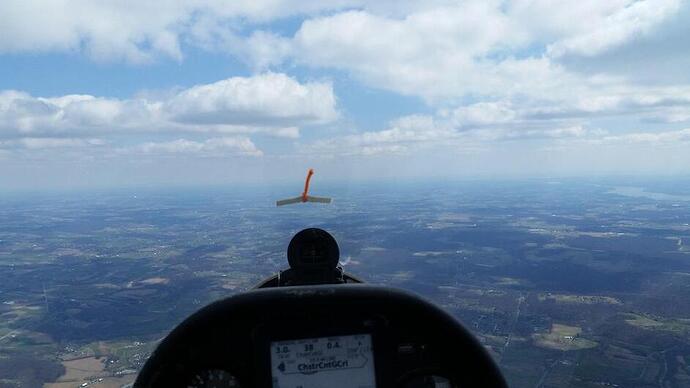 Gonna sit down and read this tonight. Thanks for posting it. I’ve never been in a glider before. I think Semmern over at SimHQ used to do it quite a bit perhaps. Looks like a blast…

Friend of mine is a corporate pilot and has taken me up in a two seat glider. VERY cool experience and I’d certainly consider doing that for my flying fix as opposed to the money spent on a PPL. That was a great read. I was a glider pilot from 2007 until 2013 when my son came along (it’s not a family-friendly pastime) but never got to the cross-country stage, happy with local flights.

The impression some folk have of soaring as being relaxing isn’t borne out by the experience. Its exhilarating and I’ve shouted out loud with joy plenty of times, but its also pretty stressful. You have to make decisions continually - most are important and some are survival level - and conditions can change incredibly quickly. You are continually working out where you could get to, and identifying potential outlanding spots.

Daniel’s story has plenty of occasions where conditions put him in precarious positions, but he was able to recover - not necessarily through skill, but also luck in finding a thermal. That’s what makes it so exciting, using the power of the sun to lift hundreds of kilos of aircraft and pilot!

There’s nothing like the feel of soaring though. You feel the air around you is alive, moving and bumping. thanks for the post @smokinhole.

Great read! I used to soar also in the past. But as you mentioned @smithcorp its is quite time consuming. From time to time I am fooling my self that if one day I would become profi pilot soaring will be my hobby again

…but only in gliders with retractable propeler. You know, birds can also flap the wings