The arcade flight game from Microsoft? It was actually a lot of fun, mindless cheesy B rated voice acting banter during missions, it supported my MS FF Sidewinder stick too … and that just added to the entertainment value to be honest

I prefer to keep Flight Simulation as realistic as possible, but there is room for some slight arcade relief. too, always thought Crimson Skies was a good un

Imagine a high end Crimson Skies 2 with suitable Indiana Jones campy voice acting style, it would be so awesome and such fun, why have they not done it already?

Textbook definition of preaching the choir.

If they made another one I’d jump in day one.

They did that but they made it for Xbox only, given the trend at the time. We lost a lot of interesting titles to the console craze of the early '00s.

I had it on the xbox. Loved it. It reminded me of Laputa.

Yes it was a very fun game that i miss, i still have my cd+manual+box.

I wonder if it can be vorpX’d…

This may interest y’all

VTOL VR proved you don’t have to have a real plane in a sim to be successful. No reason a Crimson Skies VR title wouldn’t work either. I love VTOL VR, I’d get a Crimson Skies 2 version as well, especially if it was multiplayer.

I played it back in the day but never finished it. It had really diverse and fun missions, and you could customize your airplanes similar to Mechwarrior 2/3, where you could change their engines, armor, outfit with many different weapons. I think it was first “flight sim” that had self shadowed 3d cockpit. I think I will have to reinstall this gem, though never tried it on Win 10, even on XP I had some issues running it…

Ah man, what I wouldn’t give for another Crimson Skies game - we played some of the table top version at gaming parties back when I was in high school. I think unfortunately this was another one of the casualties of Microsoft buying FASA, stripping it of anything they deemed useful, then burying the rest under layers and layers of copyright to keep anybody else from playing with their toys.

Not that I’m bitter or anything though.

I’m honestly hoping that given the release of MechWarrior 5 and the success of the other games in that franchise, and with new renewed interest in flight games and 20’s themed things, somebody will try to resurrect this (and for the love of god, get all the same voice actors).

Not only…
If you failed a mission enough times the game would ask you if you wanted to skip it.
Gentlemanly!

It was a great universe, the novels that they put out were great aviation pulp/camp. I’d be a pre-order for sure on a new CS title.

I actually wrote a strategic tabletop game, where one player played the air pirates, the other a security company. You could either sim the combat results, or pull out the tactical game (the original boxed version from FASA) and figure out the results that way.

I used to love playing Crimson Skys. What a gas! I miss that game.

I think I got a demo version and, being poor at the time, I never got the full version. I loved it! If I recall correctly you launched from and recovered back to a Zeppelin. Somehow, that made it sooooo cool.

This game did not play nice with ATI video cards in Win 7?
http://www.mission4today.com/index.php?name=ForumsPro&file=viewtopic&p=106465#106465
Any clue how it does with ATI cards and Win 10?

It was a fun game that deserved a proper follow-up.

There is a mobile game set in the universe so the IP is floating out there still alive a bit. 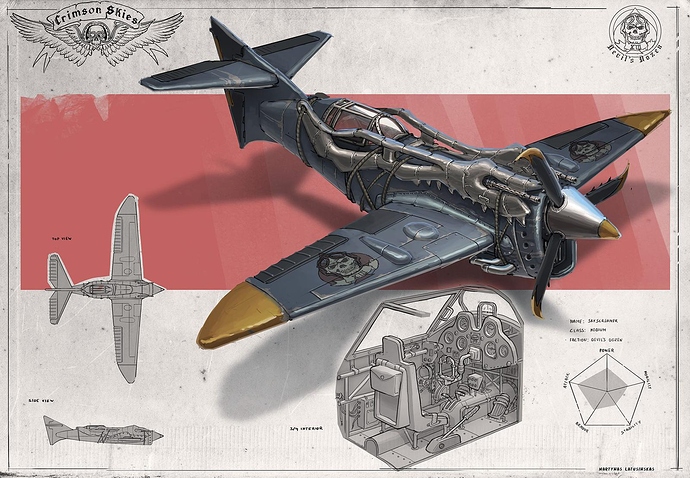