Anyone try L.A. Noire and Fallout 4 VR in the Rift?

Just curious of the thoughts on them. According to some light browsing, it might have a couple control issues to overcome. I’ve not played either game in their original form…so it is kind of cool I might be able to experience them for the first time in VR.

That said - if I’ve never played the previous Fallout games - will I “get” Fallout 4? I mean…will I miss out on a lot of the backstory by not being familiar with the previous games?

L.A. Noire is Vive only at this point. There are some hacks to get it running on the Rift but no guarantees.

I’ve not played Fallout in VR, but all Fallout games have been self contained stories in a single universe (like Skyrim) so you wont be missing anything.

You can play fallout starting there for sure. I did.

Been playing through Fallout 4, LA Noire should be here shortly. Fallout 4 is good, but is just the same game but in VR, with a few control differences. That’s not really a bad thing, but it’s not built for VR etc. also like LA Noire it is technically Vive only, but I’m sure there are workarounds.

Fallout 4 VR is a really good AAA game, now it’s had some initial patches (it rolled out with the wrong resolution set etc) and works well. Using a minigun on a Deathclaw is something worth experiencing in VR for sure. It’s a stand-alone game, you don’t have to worry about the others in the series for continuity. It’s built for Vive room-scale, but can be played in a small area (with quick ‘rotate’ swipes).

Having said that, I would probably wait until they update (actually if they update, as Zenimax and Facebook have ongoing legal issues) the controls for the Oculus Touch. I tried on the Rift compared to the Vive and it looks like Besethda have chosen to use the Vive trackpad ‘swipe’ as a major way to control menus on the Pip-boy etc. That really doesn’t work well with the Touch thumbsticks unfortunately.

From what I’ve read, for Rift users that want to persist the best way is using an Xbox controller on the menus and just put up with the Touch mismatch for everything else.

I’m sure there are workarounds.

For L.A. Noire, you can use this (as Rockstar went as far as blocking non Vive hardware)

…but there are still Rift Touch controller issues to battle. On the Vive it looks/plays magnificently. Like the original, if you wanted a 1940’s GTA experience, with a decent detective game then it’s pretty much better than 95% of existing VR titles - mainly because these two seem so big and fleshed out (as previous AAA titles).

At the moment VR is at its Nintendo vs Sega, Xbox vs Playstation stage, so titles and publishers will split like this. It’s a battle for the dominant API.

PS I was playing these two obviously really recently, but didn’t want to keep harping on about VR games here on Mudspike too much. People complain

(as Rockstar went as far as blocking non Vive hardware)

Doom VFR did as well, but then removed it, so in time that may change officially.

I was playing these two obviously really recently, but didn’t want to keep harping on about VR games here on Mudspike too much.

So those seem like two big title games - does Vive have the bigger market share or something that is preventing those titles from coming out of the gate with Rift support?

does Vive have the bigger market share or something that is preventing those titles from coming out of the gate with Rift support?

It’s about 50/50, so it makes no sense to lock out the other if you have the choice. For the big guys like Zenimax and Rockstar it’s more complicated.

For Bethesda (Skyrim, Fallout etc but owned by Zenimax) it’s a plain ol lawsuit to do with John Carmack (of id, DOOM fame etc) leaving them and joining Oculus. They claim stolen IP, so you can understand why they wouldn’t at least try that hard to support the Rift.

ZeniMax v. Oculus is a civil lawsuit filed by ZeniMax Media against Oculus VR on charges of theft of intellectual property relating to Oculus' virtual reality device, the Oculus Rift. The matter was settled with a private out-of-court agreement by December 2018. The Oculus Rift is a virtual reality headset that was developed by Oculus VR. The company was founded by Palmer Luckey, who had a keen interest in head-mounted displays and had developed a prototype of the Oculus Rift by 2012. Concurrent...

For Rockstar, they are just being Rockstar, in that they just want to play with VR and do what they like on the PC. The L.A Noire assets were there and decent enough to upgrade, so for their experiment they just chose Valve/HTC Vive. People are wary of Facebook becoming too big too soon in VR, so the Valve ‘OpenVR’ (or rather the next revolution of it) seems to be a safer bet for big players.

I think it will sort itself out eventually, with a standard emerging that works for everything. The battle for Oculus as a business unit within Facebook is to find a way to make money eventually. The ‘store’ was the plan, to combat Steam as the gorilla, but that’s hard to make progress on without dumping a lot of serious cash. Eventually when the specs settle down who we buy the hardware from will be less important (like a monitor today) but the main players still want it to be like consoles, as in make margin on the hardware through software sales.

Besethda have chosen to use the Vive trackpad ‘swipe’ as a major way to control menus on the Pip-boy etc.

Well, look at that… 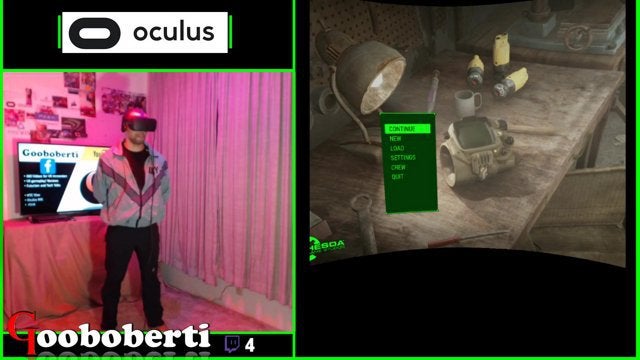 Well, look at that…

Thanks for the brief history lesson on why and where we are with Oculus vs. Vive…interesting stuff there.

For Rockstar, they are just being Rockstar, in that they just want to play with VR and do what they like on the PC.

I own GTA V - and I’ve never played it. I’ve watched probably 100 GIFs of other people playing it. But that would be one of those games that I’d have to play after 10PM when the little one is off in slumber land. It’d be cool if I could play it in VR for my first experience. That is SO hilarious I woke up the kids laughing.

it was NOT hilarious.

Definitely interested in VR versions of FO4, Skyrim, Doom, LANoire, but am voting with my wallet and not buying until they choose to officially support Rift, especially at the expensive full prices they are charging for VR versions of these old games, not going to pay full price and have to deal with janky controls workarounds.