Best orientation for Linear Hall Sensors in a joystick?

Hello all. New here and hoping for some advice.

I would like to know what best way to mount magnets in a DIY joystick to get the most resolution over a Max of 50-degree rotation?

I have seen a few designs in various forums and many use different orientations of magnets.

I have sketched up something to illustrate some scenarios.

This picture is of a 3Dprinted plastic part coming through a bearing with a slot cut in it. It that slot a rare earth magnet can be placed in various orientations. The hall sensor is below it with the sensitive side facing up… 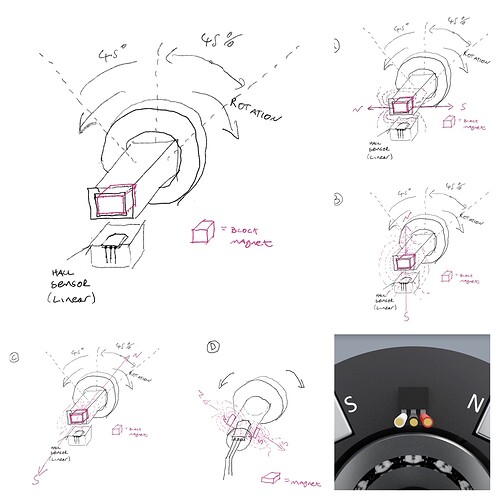 Has anyone tested these scenarios? or know the theory behind which one will produce the most resolution over 50-degree range and why?

Love to hear which scenario A,B,C,D would be best.

Hey there, @vman69au and welcome to Mudspike!

I haven’t tested all the scenarios, but here’s how I made mine once.

First of all, a Hall effect sensor registers magnetic fields, and is the sensor of choice for controllers, these days. They can be bought really cheap online, and just need a magnet on the axis they are supposed to sense. They are contactless, so they don’t wear out, and they are a lot more precise than a potentiometer. I made my own angular sensors out of Allegro 1302 Hall sensors, a diametrically polarized hollow magnet and a bearing. [image][image] There are other designs, such as usi…

Feel free to ask any questions.

Also, look up Authentikit on youtube. Take a look at his build videos and how he designed his bearings with hall sensors.

One thing I can tell you is that C will not work as there will barely be a change of the magnetic field at your sensor which is the opposite of what you want.

If you’re outside of Europe I am not sure supermagnete.de will ship to your country but within Europe they are the place to get magnets.

At work we use thousands of their ring magnets in our products every year. Top quality and great customer service. I think we had 2 magnets over the course of 7 years that were out of spec and as compensation we got a whole bunch for free with the next shipment…

Welcome! And nice DIY project you got going there. Keep us updated!

How did the ring magnet in your picture attach to inner bearing race ? 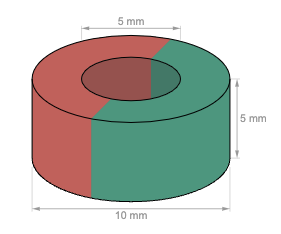 The north and south run across the face… is the base of the ring magnet also magnetic ? Ie sticks to the inner bearing shaft by itself…?

I believe so… It’s been a bunch of years since I used them. Still have a few. I’ll check.
One thing though. These are rather powerful magnets. I used them on a 8 axis throttle quadrant and had to put up 2mm thick steel shields, between each axis, to stop the magnetic flux from disturbing neighboring axes.

Take a look at how Authentikit makes his bearing sensors in this video.
FWD to 30:00 if you don’t want to watch it all is the base of the ring magnet also magnetic ? 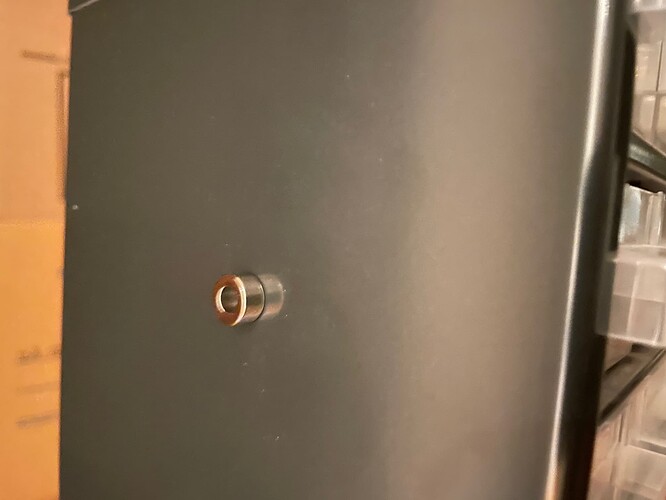 These magnets are very directional which makes them so useful. The field is shaped kinda like this: 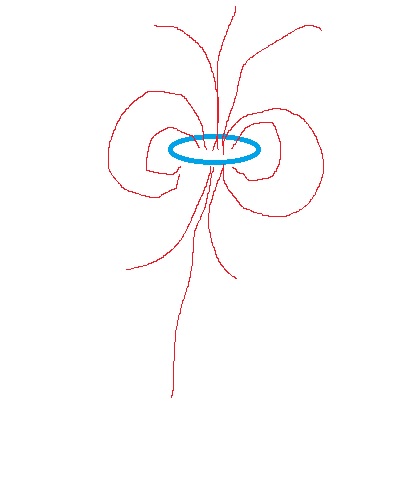 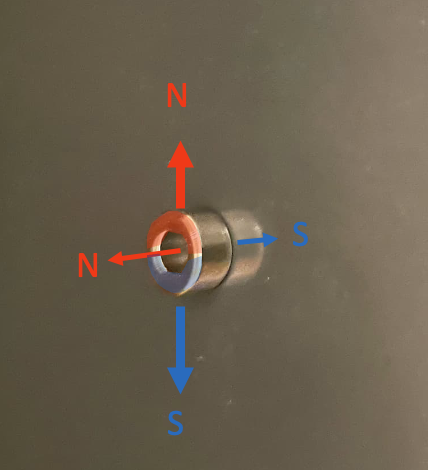 Anyone know of a supplier for these magnets and A1324LUA-T sensors in Australia ? I can find a few types of magnets here but none with 10mm OD and 5m ID that fit a bearing so well…

Thanks this was so useful. Wow amazing engineering from Authentikit and such great documentation for this project. What is interesting is that this orientation is nothing like any of the scenarios I posted. After analysing the design this orientation is like this picture., 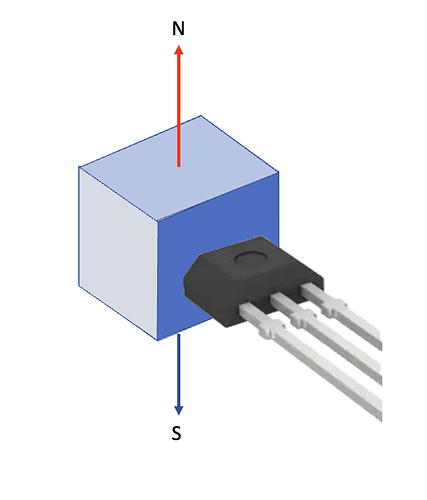 The most sensitive branded area is not perpendicular to the magnet at all but inline/Parallel to axis. I guess the flux from that square magnet is strong enough to give a positive +5 to -5v either side of neutral position shown.

This is same orientation as Authentikit design… 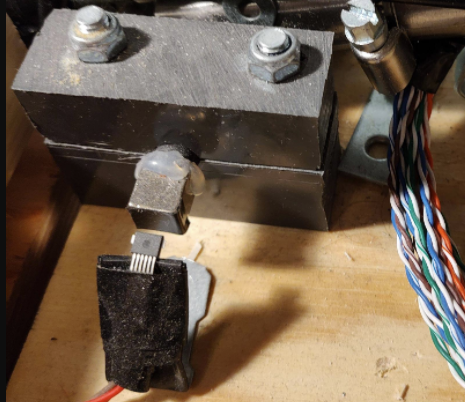 No, that is not how these magnets work. Check my crude drawing. The field is weak on the sides were you have put the thick arrows but very strong where you put the thin arrows

some lower force magnetism on opposite plane

Yes. They will also attach to the outer diameter.
BTW, what are you building?
My preferred angular sensor is the TLE5010.
Have a look at this thread.

Got a DIY controller project? I can help Hardware & Tech Questions

My preferred setup for DIY controllers are a Teensy2 micro controller and the MMJoy2 software. With this setup I can make buttons, switches, encoders and axes, that will work as any USB game controller in Windows. I just received stock of more Teensys and PCB’s. I also have a bunch of TLE5010 contactless magnetic angle sensors. Just put a magnet that rotates with the axle of your joystick gimbal or throttle lever, and the TLE sensor will pickup the magnetic field and translate it to fractions …

You sure ? I think you’re describing an Axial ring magnet not a diametric one. An axial one would display the characteristics you describe as per this drawing. 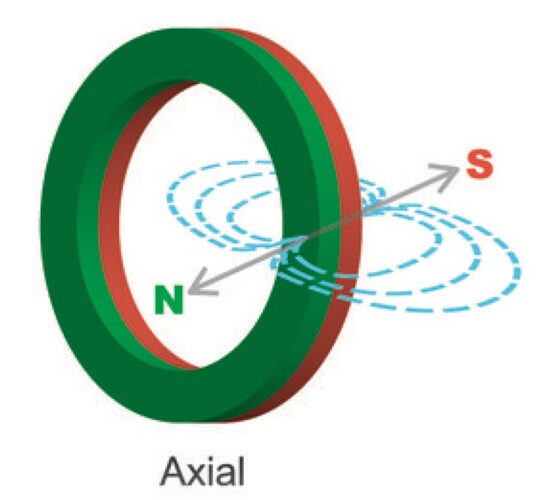 Thanks. I am wanting to build helicopter collective…will check out your thread as well. Thanks for the info

in that case it should be marked somewhere on the ring right? Otherwise you can get huge variance during the build process.
Also, some sensors can only detect the change in a specific direction, others are able to do both. The TLE5010 @Troll mentioned works really well for example (the whole TLE50XX family really).
I have a 3D sensor here (HAL3900) that, among other things, enables you to only messure the field in a specific direction and cancel out other fields which is useful when you have a lot of sensors and magnets close to each other or need to do very precise meseaurements but it is overkill for most DIY applications.