The Far Cry thread got me thinking about games with outstanding characters/voice acting/story lines. These are games you put on easy difficulty and blow through just for the story. An interactive movie. What’s your favorite?

Mines a little bit of a hidden gem. I present to you Spec Ops: The Line. Outstanding characters, fun gun play, and a very “Apocalypse Now” feel to the story. Highly reccomend.

“Brothers - a tale of two sons” instantly comes to mind from recent years.
I have played a lot of other good ones (mostly adventures and RPGs naturally) but I have to think about which ones were the best.

Mafia 3, The Witcher 3 and Subnautica stand out in this as well. Big-ups to Gunny for reminding me of specops, which was great indeed.

But I hated all that video clip stuff during a game. The one that springs to mind was MW2 the scenes where pretty horrific for a FPS. Firing squads etc lots of blood and gore. I am no prude but I wondered what it would do for the mental health of children

I thought the Battlefield: Bad Company 2 campaign was pretty good.

BF:BC2 was fun also. Call of duty 4:modern warfare had a special place in my heart also. Medal of Honor (the tier 1 reboot) was awesome also.

well, that was pretty good too

Yes. Quite good story for shooters of that time!

Everyone’s mentioned most of mine already, so it looks like I keep good company. I’d like to add Star Wars: Republic Commando for the sheer atmosphere of the game and Splinter Cell: Blacklist because of what I consider some of the best written and delivered dialogue I’ve ever seen in a game. It was action-movie-worthy storytelling, which more than made up for some of the shortcomings in gameplay.

I can forgive a lot of ‘oops’ in game design if you tell me a decent enough story.

"The Polito form is dead insect … "
Ah the System Shock 2 plot twist scene sends shivers down my spine even today.

Gunnyhighway’s mentioned Spec Ops The Line had great story and really sucked me in despite mediocre gameplay.

I also enjoyed stories in Ace Combat series - mainly PS2 era titles- AC4, AC5 and ACZero. You really felt like a bad ass pilot in those games. There are rumors that this trilogy is being remastered for new gen consoles. 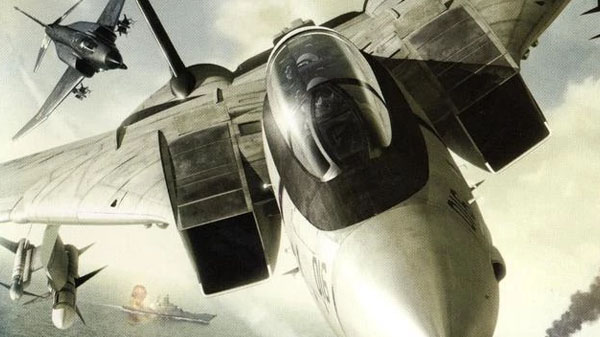 Now, a remastered AC4 for the PS4 sounds like a good time to be had by all.

especially if they deign to put it out on steam too. I had a whale of a time with all the Ace Combat games, except the one that was set “in real life”.

Ta-dah! Free for a few days…

Buy Spec Ops: The Line from the Humble Store

Use of this product requires agreement to the following third party end user license agreement: http://www.take2games.com/eula/ Spec Ops: The Line is a new original title from 2K Games that features provocative and gripping Third-Person modern...

The S.T.A.L.K.E.R. series by far is my favorite. Great main missions and side quests. Memorable lines and characters:

“Get out of here Stalker!” every time you you head into Rostok
(Stalker SOC)

The stoner bartender at the Freedom base (Stalker BS) that is always trying to get high with you.

OK, the Hawaiian dude in Yanov station (Stalker COP) is a bit of a non sequitur with his “Aloha!” greeting in the middle of the Ukraine.

The real trick is to play all three in the correct order. Stalker Blue Sky, the second released, is the prequel to Stalker Shadow of Chernobyl, the first released. And then you go on to Stalker Call of Pripyat, the third released.

I really liked the Bioshock 1, 2 and 3 storylines.

Medal of Honor (2010) wasn’t a great game gameplay-wise but I liked the single-player campaign because it was one of the only games that tried to tell an accurate story of a single operation of the Afghanistan War. I found it very, very compelling. Then, MOH went all over the globe, lost focus and ruined their franchise with their Medal of Honor Warfighter.

Warfighter was terrible, but the 2010 reboot is a game that I still keep a PS3 around for.