Here we have the chronicle of the reign of Chief Voislav of Pinsk. Will it be long? Prosperous? Short and terrible? WHO KNOWS??? (OK I KNOW).

Here we have Voislav and his wife Liubava. She looks inviting eh? Real winner. Thankfully, she’s a bit skilled! 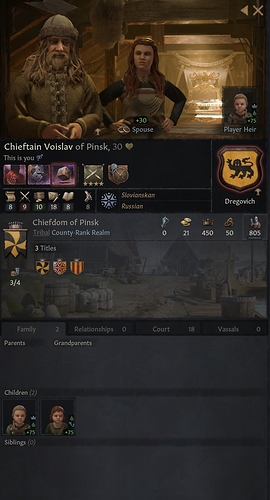 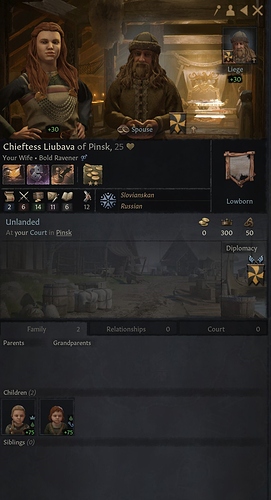 The kids are special. Varvara is pretty impressive. Total gambler at such a young age. I’m not sure where she got it from, but my paranoid nature leads me to a lack of trust in her future self. And her present self. 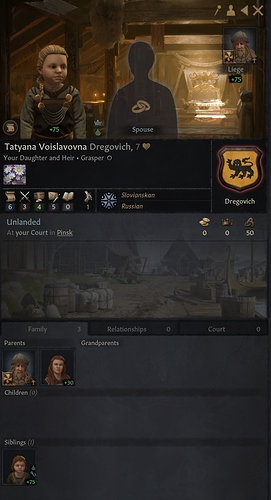 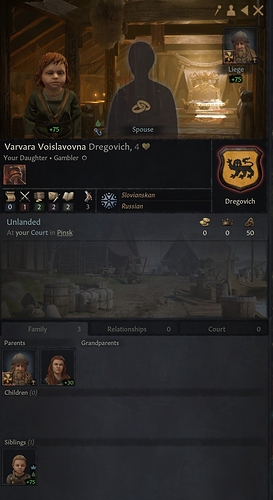 We adopt a rather martial lifestyle - the intent to defend our borders and take those of our neighbours. We have a greater claim to it than they do after all. All lands are ours.

Our priest blathers on and on. Not particularly one for religion myself, I’d rather bludgeon my enemies over the head in my spare time. I also think these kooks are a bit loony. All part of the paranoia.

She didn’t think much of me before, but I’ve fixed that problem. Pretending to listen and a little scheming have improved her opinion of me greatly.

So in the midst of raiding my neighbours, I also got raided. And being too far from home, my daughter was abducted… it was the gambler though, so is it really that big a deal?

Troubles… our men are being maimed…

But with injury comes succes. We have looted our neighbours, and caught the filthy dudes who dared try to steal my gold. Still have the problem of the missing daughter though…

Aha! Hopefully a son comes from this excellent news!

Ah, the daughter is kind and caring. Not exactly the path I would have chosen, but who knows, maybe it will help her!

Having appropriated some wealth from our neighbours (who definitely didn’t deserve it) we set about constructing markets to further develop our own wealth! The tribe must have funds!

Having fought and won together, a little stroll amongst the men is in order. They must respect and love their ruler. Or at least fear him!

Another son perhaps? (Yes the first child was a son, I failed to take a picture of that)

Lacking a claim on the land to which my daughter was brought and imprisoned, she languished for a while. Thankfully, some other bloodthirsty jerk managed to take the place and decided he didn’t want her, so she was sent home. Welcome back!

Things rapidly went downhill, however. The world is a bloodthirsty place, and I am not the only one with designs on greater borders. One such neighbour felt it time to take what I owned… sadly, I have no allies, and a much smaller army. The conclusion was inevitable. We have lost, well, nearly everything. We hold some small lands but our armies are broken and certainly not big enough to raid anyone else, let alone steal their lands. Our eldest daughter is the only one even approaching marrying age, and while we could attempt to betrothe them, this is a man’s world, and it would gain us nothing in the short-term. We are sadly defeated. 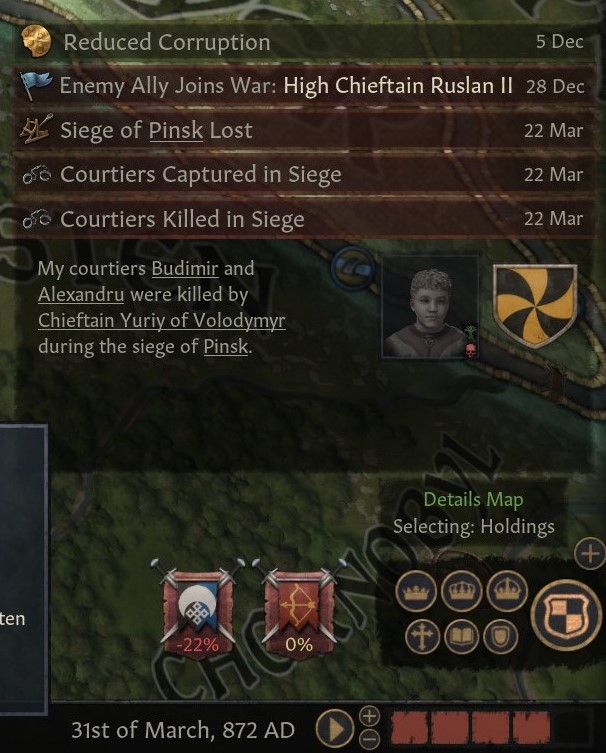 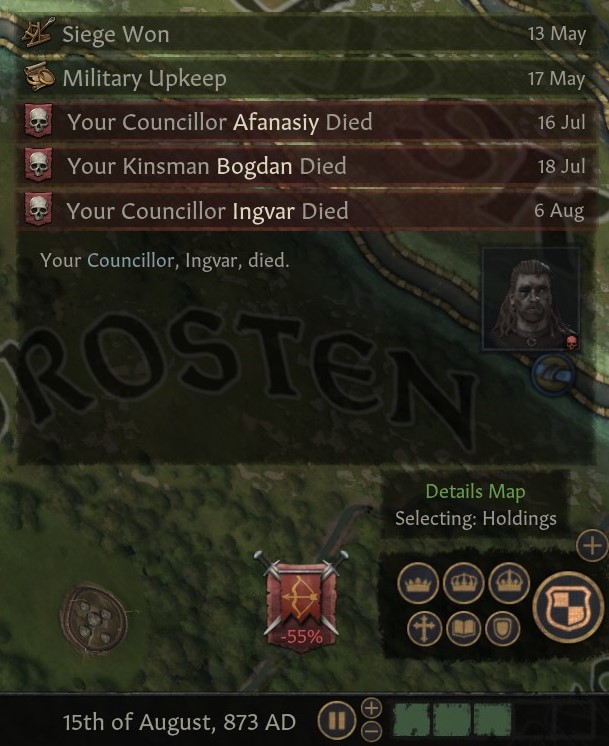 And so ends the playthrough of Voisav of Pinsk. Because there is literally no point in trying to come back from that. It’ll be another year or two before we lose all our lands since we can’t defend ourselves. AHHHHH.

Stay tuned for another Crusader Kings III playthrough where I hopefully don’t botch things and die in 3 hours. Haha.

To be fair, I think this was a decently challenging start considering I still don’t know many of the mechanics that are new to this version and it’s been a while since I played CKII. Also having a middling army and being surrounded by guys with allies was uh… perhaps not the greatest idea to start haha.

So much fun though!