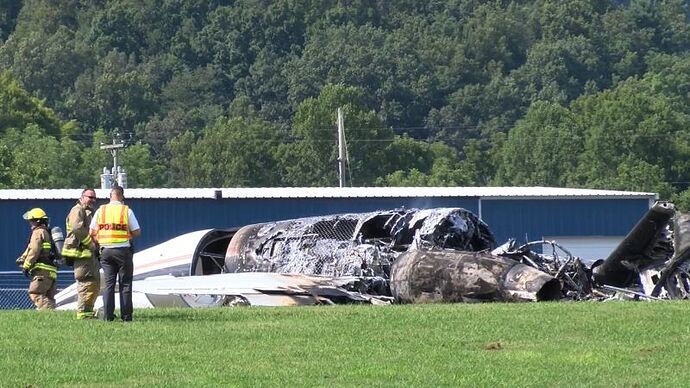 The wreckage caught fire but luckliy everybody survived with some minor injuries.

NASCAR affiliates sure have had some bad (cough) luck with aviation over the past 10 or 15 years. I’d say more, but I have some overlap with some of those involved.

NASCAR affiliates sure have had some bad (cough) luck with aviation

Because they have a propensity to always turn left…?

Question for Beach or other pilots.

From footage of the incident, the plane burned with a lot of fuel onboard.
Don’t you ususally plan on just having enough fuel for the trip?

Just thought it was unusual.

From footage of the incident, the plane burned with a lot of fuel onboard.

No, lots of organizations “tanker” fuel to save money. If you have a large fuel discount at your home base, or if you have your own fuel farm even, you’d tend to take as much fuel as would be required for the trip out and back…but also allowing for landing under the maximum certified landing weight. The route they flew was so short that they probably would have only had very partially full tanks unless they were going somewhere beyond Elizabethton after that stop.

The airfield (0A9) does not have a very long runway, but is adequate for Part 91 jet travel…and maybe even 135 if you crunched some numbers and had the performance.

I’ve been into that airport many times, but always in a King Air. And it has some significant terrain to the east…and if you come in from that direction you have to clear it. Generally people prefer to land on runway 6. And if you are forced to land 24, you lose 429’ of runway due to the displaced threshold. I haven’t studied what happened on Jr.'s flight…so not sure which way they were going.

Looks like…based on preliminary information, they were landing runway 24:

A Cessna 680A Citation Latitude, N8JR, was destroyed by fire when it suffered a runway overrun and crossed an airport fence after landing at Elizabethton Municipal Airport (0A9), Tennessee, USA. There have been no reported injuries. NASCAR Racer Dale Earnhardt Jr, his wife and daughter were onboard. The aircraft made a hard landing on runway 24, a 1380 m long runway. It bounced and went off the runway, coming to rest on the edge of a road about 120 meters past the paved end of the runway.

And looking at NOTAMs, it does appear that the runway was lengthened recently…

For reference…the plane would have been coming OVER those hills beyond the runway in this picture…landing toward the camera. You can see how you’d tend toward a steeper approach. There is also a significant slope to landing on 24…with a touchdown elevation of 1592’ while the end of the runway is at 1556’. That downhill gradient (nearly 1%) does significantly add to the rollout, also puts pressure on the pilot to get it down knowing that. It would be interesting to see what the METAR was showing at the time and it is also worth mentioning there is no VASI or PAPI to that runway. Lots of factors can add up quickly there… 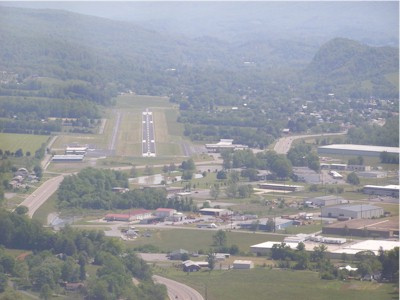 Thanks for the analysis Beach.

Thanks for the analysis Beach.

Sure…just keep in mind much of what I said may have little or no bearing on what happened. Just pointing out the common pitfalls to that particular approach to that runway. The NTSB will dissect it to a very fine detail…and the pilots will be able to give their full cooperation one would think.

NASCAR affiliates sure have had some bad (cough) luck with aviation over the past 10 or 15 years.

Even further back than that. Davey Allison’s crash was in 1993.

Indeed, today I’m going to land with almost 20000Lbs of fuel because where we are going it is $2 per gallon more than at home base. That’s almost 2000 gallons more than we would normally land with, but we effectively will be saving the boss the best part of $4000. Plus, having extra gas is something I will almost never complain about.

Was Earnhardt flying or living large in the back with his esposa?

Thanks for the explanation Beach. Cost was something I hadn’t considered.

@smokinhole - he was living large. In fact, the local news described it as his private jet, not chartered…

His, or one of the racing teams, I wonder? His stepmother has been sitting on a massively lucrative business that he’s kinda sorta been involved with.

I’d say more, but I have some overlap with some of those involved.

Most of those teams have flight ops at Concord, no?

Yes, but I think this flight originated at Statesville…

OMG, a EE and a NASCAR fan… Is there enough room in the heavens above to hold such an ego?

OMG, a EE and a NASCAR fan

Nah, I just grew up around it (my dad worked at WSOC), so I followed it a bit, and going to school as a kid with one of Rusty Wallace’s kids. Plus my brother used to play basketball with Dale Jr.

I haven’t watched a race in probably 20 years.

Again, j/k. NASCAR is legend around here in NC. Folks who like it, it’s cool.
Much respect for you (Earned a EE), I just have to deal with the amount of RAM you lleave on a design.

I flew for Rusty and Mike quite a few years ago. One in their King Air and the other in their Baron…guess you can guess which one had the King Air…

I figured EEs would be Formula 1 geeks. Not that there isn’t a ridiculous amount of technology in NASCAR…but those F1 cars seem like bundles of electrons with wheels.