To avoid cluttering the Harrier thread, I decided to make a new one for the purpose of dicussing the bombing capabilities of the Viggen.

I still haven’t found out why only retarded bombs can be released in CCIP mode, in the Viggen.

I suggested that it might be the trajectory calculations that weren’t precise enough for large distances, so maybe dropping close was all the CCIP calculations could deal with and this required retarded bombs.

@jenrick suggested that it could be a computer hardware issue, simply not having enough RAM/ROM for more than one trajectory calculation.

It could be a combination of both factors but I would like to know, so I’m looking in my library, online and asking around. I haven’t found the answer, but I did find this very detailed article about the CK 37.
http://www.datasaab.se/Papers/Articles/Viggenck37.pdf

Tagging @Deacon211 and @WarPig to join in here as well.

That is a fascinating article! I’m still reading it, been a busy few days weeks month.

I’d previously read that although the Viggen was the first application of a digital computer in a fighter aircraft, some of the technology in the CK 37 made its way into the F-14A. Any truth to that?

Interesting article, thanks for posting that. So core memory for the Viggen is 128kB, and processing speed is 500k FLOPS. So overall for the time not surprisingly good or bad. Considering it was supporting the entire flight system I can see ROM being the limiting factor, but they make mention of adding additional weapon system data and upgrading the memory to 240 kB.

I will make a completely unqualified statement, with no data to back it up, but I am guessing it was a lack of operational need. The Cold War was the epitome fly low, fly fast, one pass, haul … well we all know the rest. Air defenses just got better as time progressed, and the Viggen was to my knowledge (someone correct me if I’m wrong please) not ever even offered for export. If the doctrine basically avoided any need to ever do medium to high altitude dive bombing, no sense in spending the money to produce the upgrade to add it. If there’s never a chance a foreign client might want to buy the aircraft, again no need to add it.

Indeed. The attack version was all interdiction strike capability.

Not the attack version, as such, but a 37E (for Eurofighter, actually) was proposed and pitched into the NATO fighter deal that ended with Norway, Denmark, Belgium and the Netherlands buying the F-16.
It was also offered to Australia, India, Japan and Austria, but no deals were made. These export variants offered upgrades like AAR and more advanced instrumentation, communication link and naturally a more modern computer. 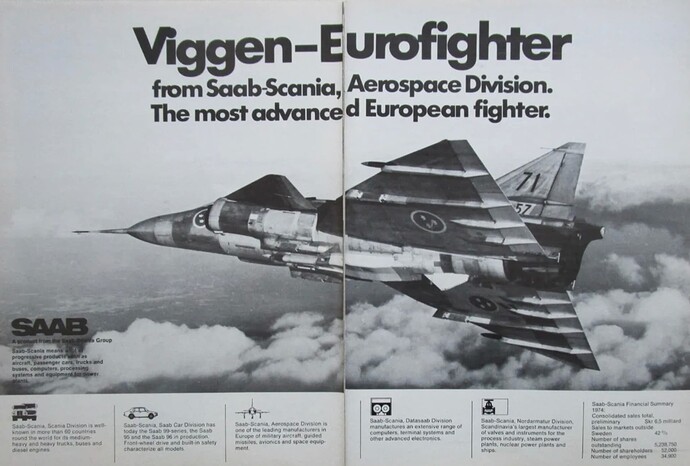 Can you imagine the JSDF flying the Viggen?

Would have been perfect for their anti-ship mission! There’s some cool alternative history there.

I still think it’ll make a good stand-in for the Super Entendard on the Falklands map.

During Desert Storm, I have heard that Harrier’s were incapable of dropping Rockeye in either CCIP or AUTO from anything but low altitude at least for some period of time. It seems that high angle was just never how the weapon was supposed to have been employed.

As a work around, the China Lake guys came up with release data for a high angle delivery, but it was uncomputed; you had to drop in DSL.

Don’t know how long it was before they coded CCIP/AUTO for the Rockeye, but I don’t believe it was too long, since the air war had suddenly gone high.