Im with You!!! Apache, Hind, Corsair or Mosquito???

didnt notice anything about MiG-17

BigNewy just announced on Discord - Stable branch updated to yesterday’s Campaign Hotfix. So we have parity. I’ll mention this as well in the Fly-In thread!

We are confident and believe we have a solid 2021 Roadmap in place that will see the addition of some very exciting new modules and core development improvements. Currently, we have begun testing the new clouds with our internal testers and look forward to receiving more feedback as we expand our testing program. Check out the In Development screenshots.

We would like to share further work on the island of Rota, Mariana. We are currently working on anomalies in the road networks as well as the ground objects and their paint textures. We are also working on the shoreline rock composition details.

We encourage you to review the F-5E Tiger II Black Sea Resolve campaign below. More details on how to get involved in mission creation can be found on the forum. 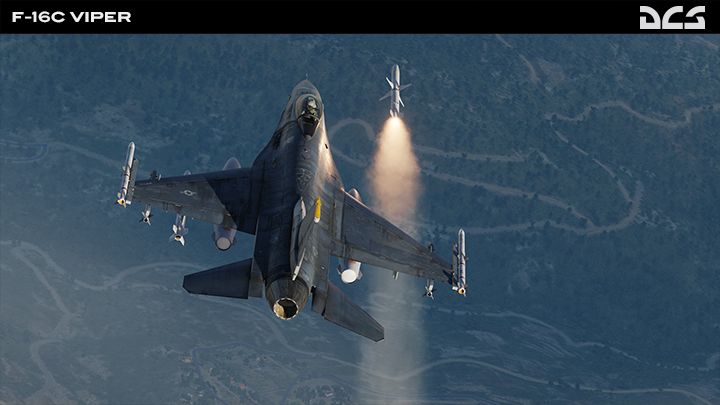 Over the past few weeks we pushed multiple minor campaign fixes out so you could continue enjoying these missions to the fullest. We would like to inform you of a longer than usual update cycle commencing now in the lead up to 2.7.

A few highlights that we would like to point out, which are also now available in Stable;

Other notable improvements have moved to Stable, read the full changelog. 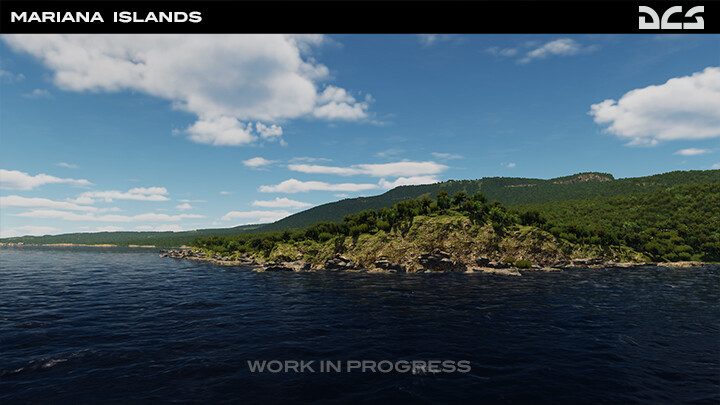 Rota Island is the smallest of the populated islands and the second southernmost island of the Marianas archipelago. Despite the fact that the island had a small Japanese garrison of more than 2000 men during WWII, American troops never invaded it. It was however bombed occasionally by the U.S Navy in attempts to silence Japanese warning transmissions about B-29 Superfortress bomber attacks. 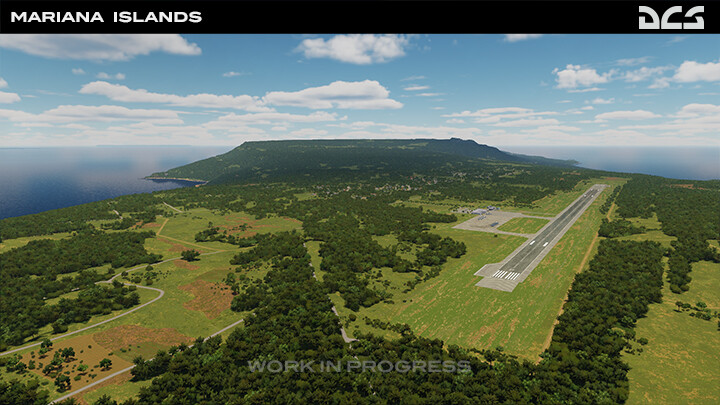 Sinapalo village is the biggest settlement in the island and features Rota International Airport. The single runway was built and manned by the Japanese until the U.S Navy bombed it into disuse at the end of WWII. In September of 1945, the airfield was renovated and extended an impressive 5,000ft to serve as an emergency landing strip. 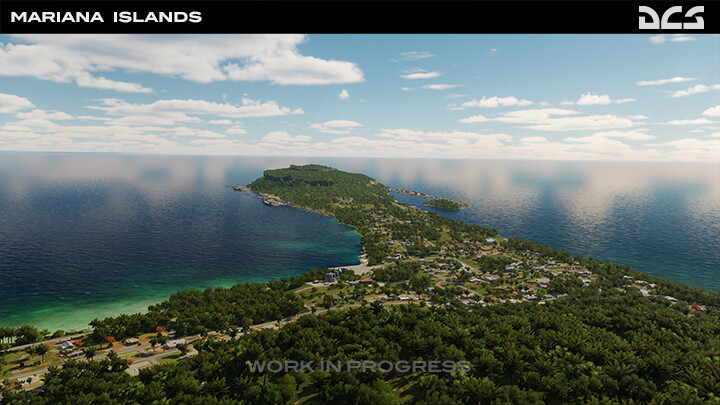 The Songsong village on the island of Rota is located along the southwestern part of the island. The village has a population of less than 1,000 inhabitants and boasts a recognisable landmark known as Wedding Cake mountain, Mt. Tinubal. The layered rock and capes have been recreated in detail to include the natural dips of volcanic rock structures and the gentle sloping forms of the limestone plateau in the North part of the island. 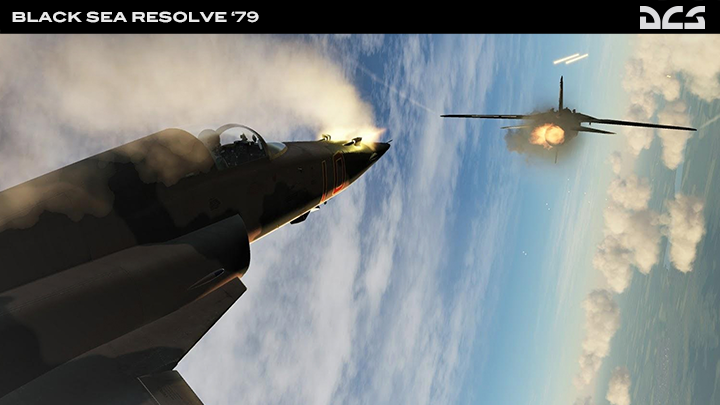 Black Sea Resolve is a fictional, story-based campaign that will test your A/A and A/G skills. Set March 1979, you will fly as part of an F-5E Tiger II squadron and support the independence of the former Soviet Union provinces.

Full-scale conflict that will progress throughout the campaign

Thank you again for your passion and support,

For those using “Stable Release” version of DCS World, it has been updated today.

The Enemy Within 3.0 campaign by Baltic Dragon:

The Border campaign by Armen Murazyan:

Memory of a Hero Campaign by Stone Sky:

F-86F Hunters over the Yalu Campaign by Reflected Simulations:

We have selected the ten winners of the P-47D Thunderbolt Livery competition. They will all receive the DCS: Mosquito FB Mk.VI for their inspired and talented efforts. Please see below. Their work will form part of the standard offering and the names of the artists will be added to the credits. Thank you to all participants for the excellent work.

We are hard at work with DCS World 2.7 and in addition to the new clouds you can expect to see substantial new Hornet and Viper features, updates to The Channel and Syria maps, improved fire effects, enhanced structural damage modelling for the WWII aircraft, updated sound effects, new World War II propeller disk animation, and more.

The DCS World 2.7 Open Beta will also bring DCS: F/A-18C Hornet and The Channel Map out of Early Access and into Release State. 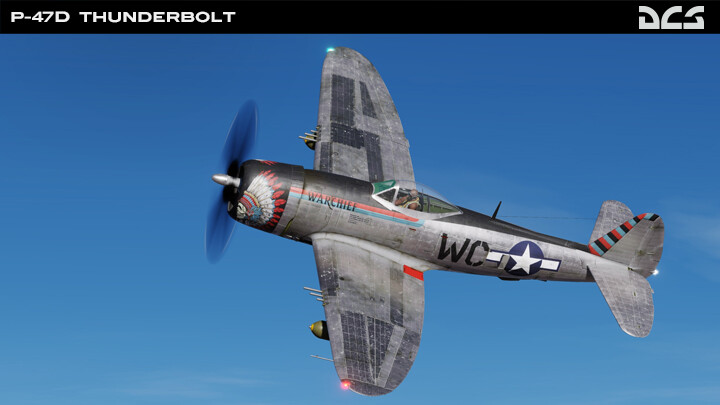 We would like to extend a special thanks to all the participants in the P-47D Thunderbolt Livery Competition. Our ten winners are listed below, with MateusOV having two liveries included. 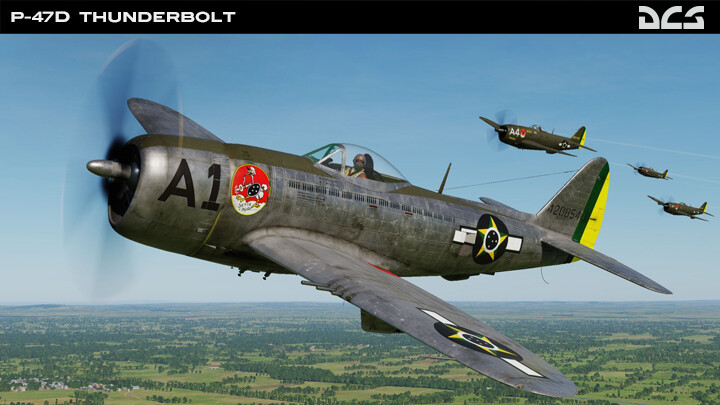 All winners will receive a copy of DCS: Mosquito FB Mk.VI once Early Access is released. 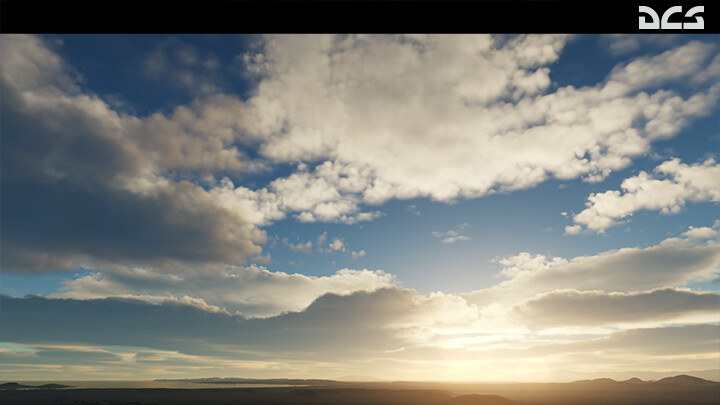 In order to simplify mission creation and weather selection, we have designed a large number of cloud presets which are convenient to select from the Mission Editor. Here are a few thumbnails to give you an idea of what will be available. 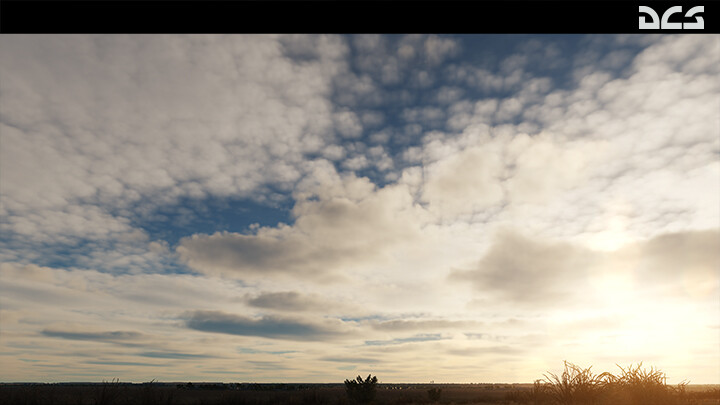 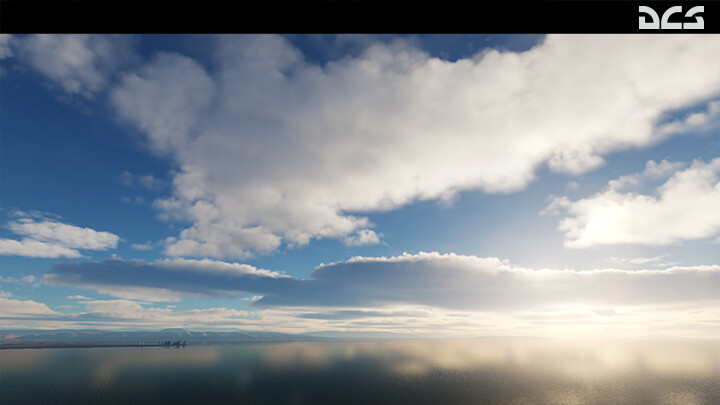 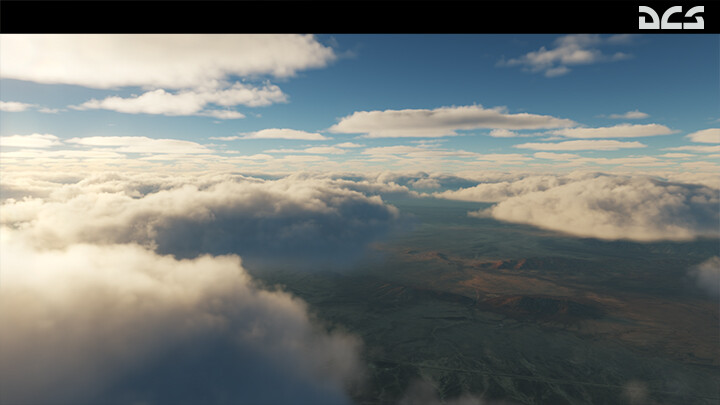 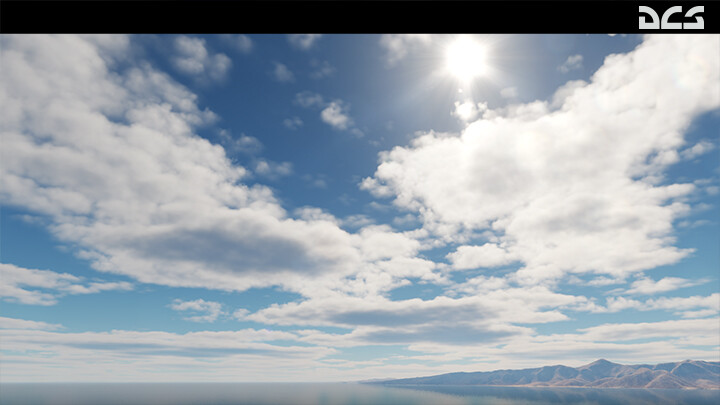 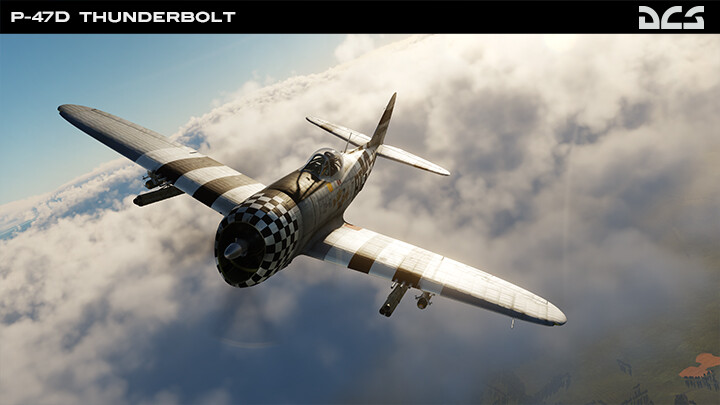 Thunderbolt pilots often claimed that they could fly the P-47 through a brick wall and live. The P-47 Thunderbolt, nicknamed the Jug, served the United States Army Air Forces (USAAF) in both the European and Pacific theaters. In total, 15,636 were built between 1941 and 1945. Many countries including France, the United Kingdom, the Soviet Union, Mexico, and Brazil also operated Thunderbolt to great success.

The P-47D excelled in the role of fighter-bomber due to its heavy armament, rugged construction and Pratt & Whitney R2800 Double Wasp radial engine that was extremely reliable and capable of absorbing serious enemy fire. In addition to the impressive eight .50-caliber machine guns with 425 rounds per gun, the Jug was armed with bombs and rockets in the ground attack role. The P-47 saw action from 1943 in the bomber escort role before being replaced by the P-51 Mustang, which had longer range and higher performance as a fighter.

Thank you again for your passion and support,

Potentially good news for our VR users - when asked about performance impact @bignewy replied to a facebook comment that he hadn’t noticed a change in performance himself.

Also these clouds from the presets will not be 100% static, they will move (and be sync’d in doing so) - this is not to say they are dynamic yet. Afaik, that is still due to come later.

Target date for this is end of March to Open Beta!

Pretty excited that we will see some viper updates in the next release (and thereafter with the Hornet out of EA). The Viper is in need of some love.

19 March 2021 Dear Fighter Pilots, Partners and Friends, Today, we are pleased to announce the Early Access features for DCS: Mosquito FB Mk.VI. The Mosquito will be optimised for multi-crew and will be the first two manned, twin-engined WWII... 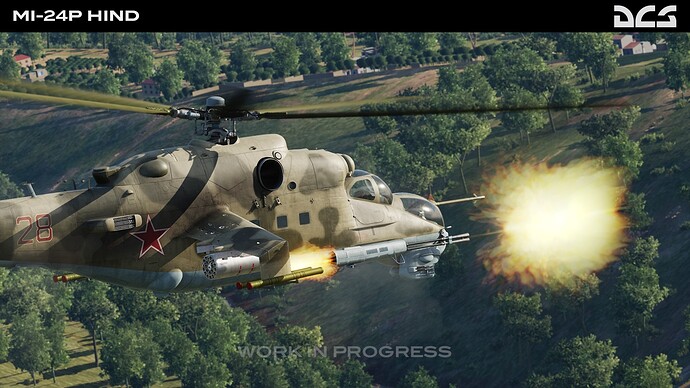 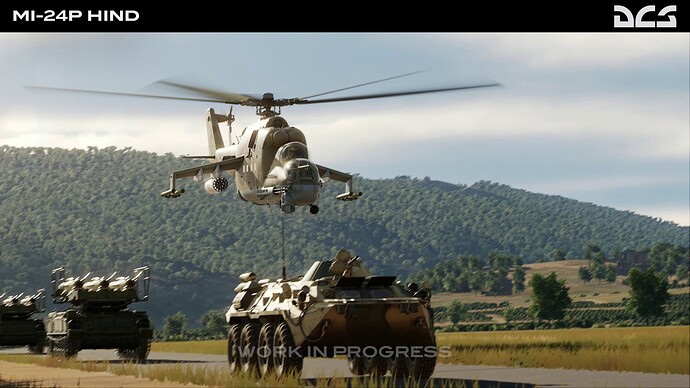 Remember that today isn’t quite over yet.

I’m not saying where in that video the “What’s that doing there…?” Wags-like comment is…

Heh. Thats a mean one Chris!

We are pleased to announce two new multiplayer features for DCS: Supercarrier. These will be available in the coming update of DCS World 2.7.0 and will offer the ability for human LSOs to control the ‘cut lights’ and ‘wave off lights’ for network players on approach. All our main updates to DCS: Supercarrier are also being worked on and their release is planned for Q3 2021. These enhancements include the Air boss and his ops station, detailed briefing room and PLAT camera along with many other improvements.

This week we would like to show you some of the progress being made on Guam. As well as allround fine tuning, we are currently working on night lighting, in particular along the roads. The map has been in internal testing for a while and we are finalising verification of airfield functionality, checking for topographic anomalies and correcting graphic inconsistencies and glitches. We feel that we are getting very close. Please do take a look at some of the details below.

We recognise that you are champing at the bit for the release of 2.7 and in particular looking forward to enjoying the new clouds. We feel the same way but we want to take all necessary measures required to deliver this new build with a minimum number of issues and so we are working overtime to bring you the best we can. We sincerely apologise for the delay.

Thank you for patience, understanding and for your passion and support. Happy Easter! 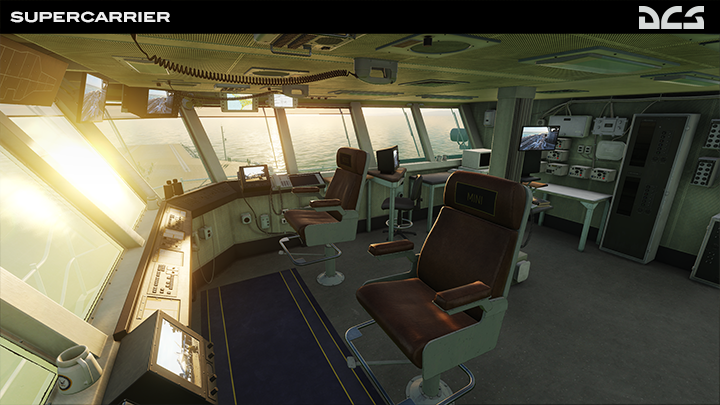 The 3D Air Boss (PriFly) station will come with the possibility to control deck flood lights, the speed and direction of the carrier, and monitor the PLAT camera. In addition, we will implement launch and recovery operations from the Air Boss (PriFly) via 5MC messages. 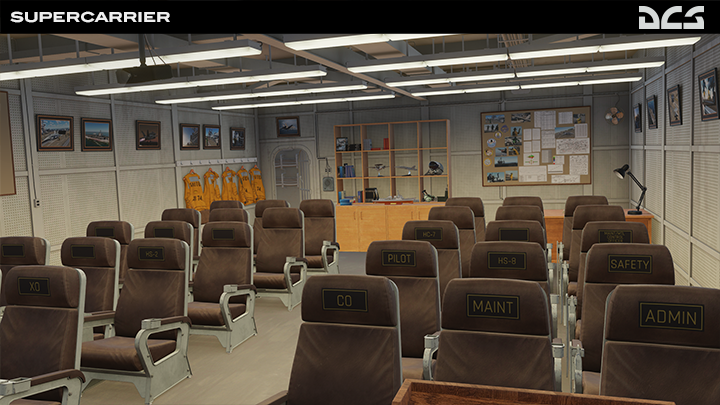 The 3D Briefing Room will offer interactive squadron meeting capability. This is particularly interesting for multiplayer action, pre-mission start and for after action review. Our Integrated Voice Chat will also allow real-time coms with your squadron. An interactive map, PLAT camera, Greenie and Kill boards will provide simultaneous online statistics during mission progression. Each pilot seat in the briefing room includes an interactive tablet that will allow you to control the fueling and arming of your aircraft. 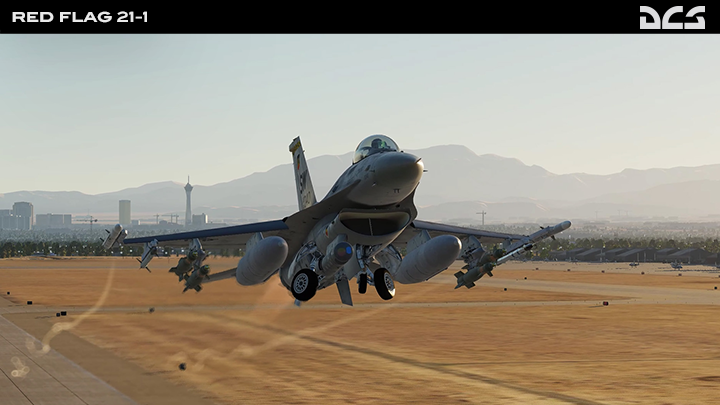 Enjoy this very realistic campaign by one of our most respected 3rd party developers, Bunyap. Operate out of Nellis AFB, Nevada in F-16C Viper and fly against adversaries in an exceptionally well researched Red Flag campaign. 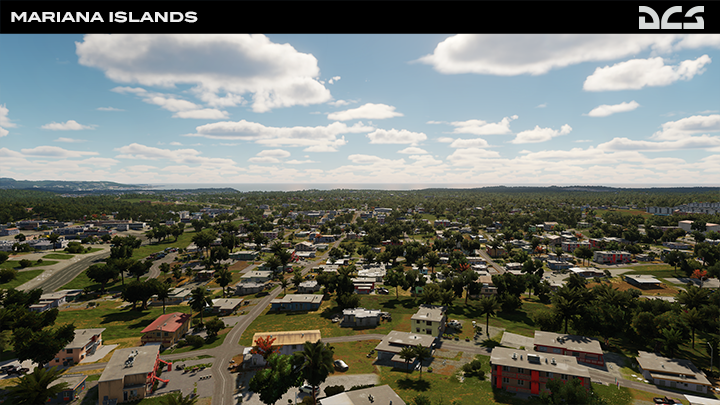 The Chamoru people settled on the island approximately 3,500 years ago and were essentially disconnected from the rest of the world until the Portuguese explorer Ferdinand Magellan discovered the island on March 6, 1521. Guam was subsequently colonized by Spain more than a century later in 1668. During the Spanish–American War, the United States captured Guam on June 21, 1898. On December 8, 1941, hours after the attack on Pearl Harbor, Guam was captured by the Japanese, who occupied the island for two and a half years. American forces recaptured the island on July 21, 1944. Since the 1960s, Guam’s economy has been supported primarily by tourism and the U.S. military, for which Guam is a major strategic asset. 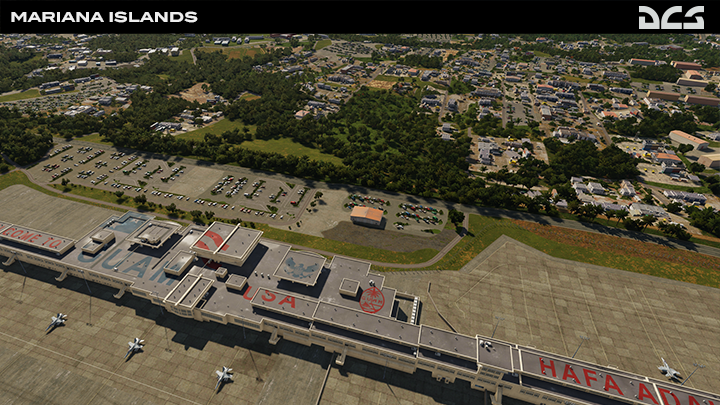 When arriving in Guam, one of the first things you will see is “Antonio B. Won Pat International”. Originally built by the Japanese during the occupation, it became a base for the USAAF B-24 “Liberator” bombers in 1944-45. In 1947, the USAAF turned over the airfield to the United States Navy, who operated it as Naval Air Station Agana until 1995. Civilian use of the airport began in 1967 when the International terminal was opened. From this time onwards, the airport has been reconstructed and upgraded many times in order to cope with the growing air traffic and passenger requirements. 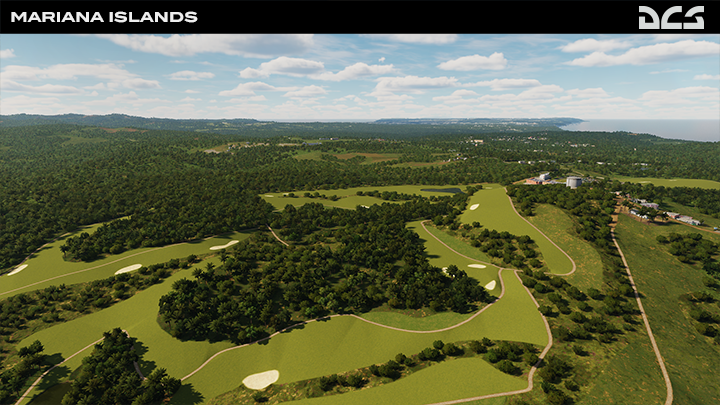 Guam is a multi-ethnic island with a current population of more than 160,000 people. The island is divided into 19 municipal villages and required the terrain team to develop a large number of new and adapted ground assets. With tourism being the most prominent component of the island’s economy, there are a lot of hotels and golf courses dotted along Tumon Bay. 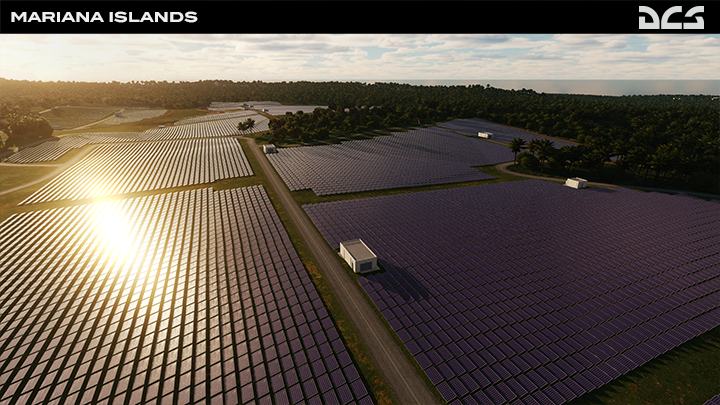 This is the Dandan solar plant that boasts over 120,000 solar voltaic panels capable of generating more than 25 megawatts of power. 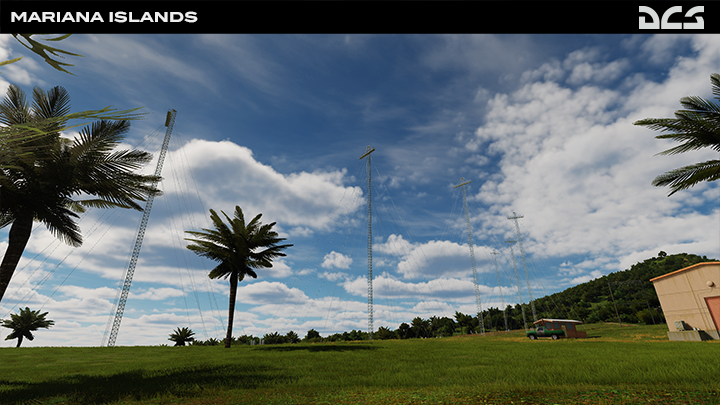 Guam is home to one of Trans World Radio’s major Pacific transmitter stations. This multinational evangelical Christian media organization goes out to more than 190 countries. 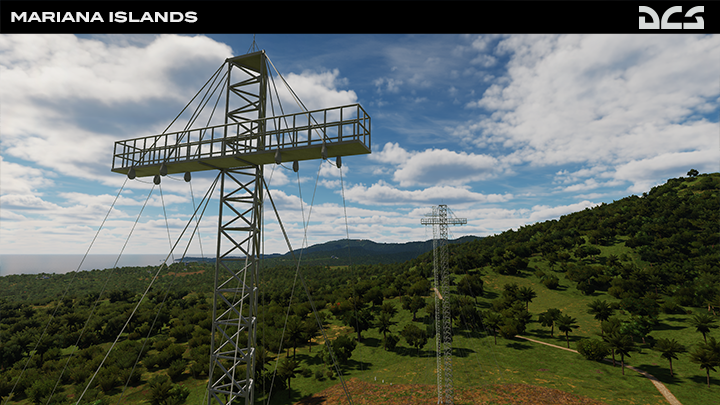 Our upcoming work is to advance work on the many military assets that are so prominent on the islands. We will show you some details in a future newsletter.

Thank you for your passion and support,

Great to hear about the Supper Carrier

Unrelated to anything so far-- but I’d kill for an F-100 Super Sabre in DCS.

R U? (See you at the first down-down)

The secret handshake is complete. Now, where do we go to ■■■■ out the fire?