Too much going on right now to hop in the cockpit, but looking forward to the improvements on the Viper and Hornet.

to all hind drivers out there, is anyone else having trouble getting the AI door gunner (no, not you @Victork2 ) to engage anything… I had the ROE set to free fire and flew over some enemy trucks and not as much as a cough from the door gunner

I have never been able to get my hip door gunners to fire. I always thought it was human error

will try the hip soon

Just tried all helos with gunners

Now that I have a GPU that at least has a chance of coping, I bought the Syria map in the current flash sale. 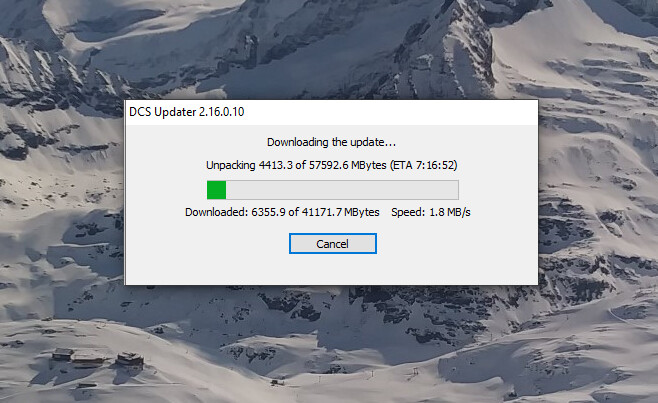 I think I’ll need at least FTTC if I want to have any chance of playing DCS in between updates now.

Now that I have a GPU that at least has a chance of coping, I bought the Syria map in the current flash sale.

Man, you just about gave me an effing heart attack… Opened the post and the first thing I saw was "DCS Updater’ in the middle of the screen. madly clicking cancel… then CTRL-ALT-DEL.

Then I realised it was a screenshot

As much as would love the Syria and South Atlantic maps, I need an extra drive and migrate DCS over to that first.

I bought the Syria map in the current flash sale.

You are going to love that map. IMHO it really is one of the best. Especially IMHO for helicopter, low level flying. Enjoy.

Agreed on Syria. Channel, Marianas, and Syria are the only maps I fly.

I really like the Syria map and need to spend more time on it.
To date I’ve spent the most time on the old Black Sea (naturally) and PG maps. I’ve spent fairly little time on NTTR, Marianas (although a good amount there recently), and Syria. I also got South Atlantic because it looked great and different even though it’s not yet ready for prime time.

All these other upcoming maps, though, have me wondering which way to go? My SSD can’t possibly take Kola and Sinai and all the others, I have no choice but to start being picky.

I still have to get a second drive. I only have a 1TB NVMe SSD. DCS takes up nearly half of that with the maps and modules that I currently have, and with all the other apps and Steam games that I regularly play means I only have 180GB spare. Current plan is to get a 2TB SATA SSD and migrate everything that doesn’t need the extra speed over to that so I can keep DCS on the NVMe drive.

I thought I would do the same earlier this year but noticed that for everything except the no-name cheapest SSDs, NVMe M.2 drives were the same price or even cheaper than the SATA SSDs (both M.2 form factor and 2.5"). Just checked, and is still true: in my country, for 2TB disks, only the cheapest off-brand SATA SSDs beat the price of the Kingston NVMe drives.
Of course the number of M.2 drives you can install is usually more limited than SATA but do have a look at prices before deciding to go with a SATA. The faster drive might actually cost less.

I ended up putting a Samsung 970 Evo Plus 2TB in my second M.2 slot instead.

. This was mainly a cost saving measure but it does mean that I only have a single M.2 slot.

Something to think about though. Do I replace my 1TB NVMe with a 2TB upgrade or add a SATA drive?

If I have a choice I try to avoid cables. But you’ll need a backup strategy that enables this. Like uploading all important data to a cloud service.

If you have a spare USB 3.2 Gen 2 port you could look at getting an external USB NVMe enclosure. You can get speeds up to 1000 MB/s going this route, which is better than any SATA SSD.

that’s where the M.2 Addon Card comes in.

all them slots on the mobo, most users only use the PCIe16 now,
they use onboard sound, onboard USB, etc etc.

My office has an M.2 Dock, connects to PCIe 4x slot, and has a front bay tray.

Right, but all of our USB ports are used up by the half-dozen USB hubs supporting our dozens of flight sim peripherals!

One USB 3.2 Port can handle a 12 Devices USB Hub with Flight controls easily,

None of the flight controls even remotely use the bandwidth or polling limits of a USB 2.0 connection let alone a 3.2.

I Run a 6 Port USB Hub with it’s own power switch and just plug all devices into that. 95% of the time I dont even use the external power, as USB3.2 supplies enough power for all 6 devices with no problems.

as for PCIe M.2 Expansion cards, Most of them only have 2 slots.

Honestly I have 4 Samsung SATA SSDs now, as I slowly replace all my traditional drives with SSDs (except my externals). (I have 3 drives left, but they are smaller drives, so a 1 or 2 TB would cover both). after all the HDDs are gone, I plan to transition the 500GB Samsungs to 1 or 2 TB each as well, and save the 500GB SSDs as backups or scratch drives for photo/video editing.

I have 2 M.2 Slots, however 1 of them actually disables one of the PCIe 4.0 Slots, so I have to make sure my Inatek USB controller is not on that slot when I enable it.

Pretty sure most of the Mobos do the same, 1 M.2 and 1 M.2 “Ultra/Fast/Extreme” that re-directs PCIe Lanes from a lower slot to that M.2 Slot.

You have to carefully study your motherboard specifications before doing that. On my Asus Maximus Hero XIII z590 I can only use two of the four onboard M2 slots. If I install nvme’s into the other two slots it reduces bandwidth available to my GPU in PCIEX16_1.

One safe bet for adding additional fast storage is external USB 3.2 or Thunderbolt. Thunderbolt 4 goes up to 40Gbps or 5000 MB/s which would be sufficient for PCIe 3.0 NVMe cards to run at the full read/write speeds. The Thunderbolt enclosures are pricey though. I opted for a USB 3.2 Gen 2 which can do up to 1250 MB/s. Thats good enough for me and the USB 3.2 enclosures are relatively inexpensive.