As I was asking for grades, seems only fair. 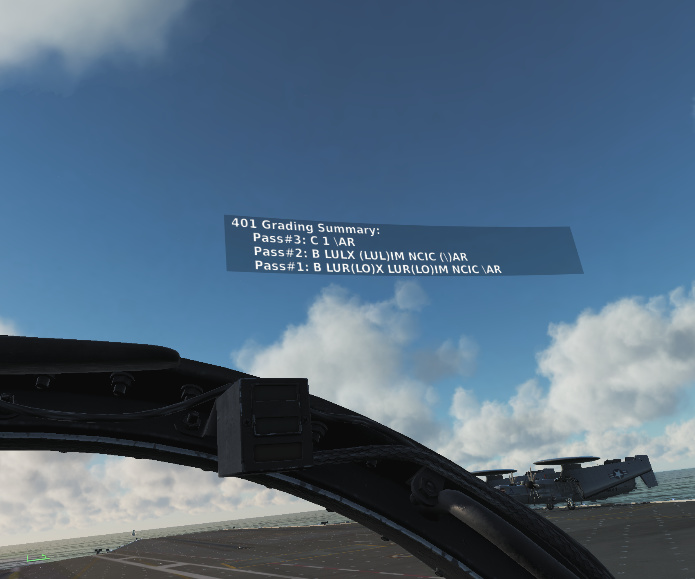 To decode: I suck

The landing I did do (it is funny to be more nervous when being judged) was going fine until I dropped too quickly at the ramp, the ‘C’ is a cut-pass (as in, terrible, but not dead), the ‘1’ is the first wire (not good, could have hit the stern) and the ‘\AR’ is saying that I fell through the glidescope downwards (the ’ \ ') at the ramp (the ‘AR’). The rest of the approach was good though. So what I need to do better is watch the ball all the way down at the ramp and not do a quick ‘plummet’…

Ok, last one, as I couldn’t leave it as a Cut-Pass before: 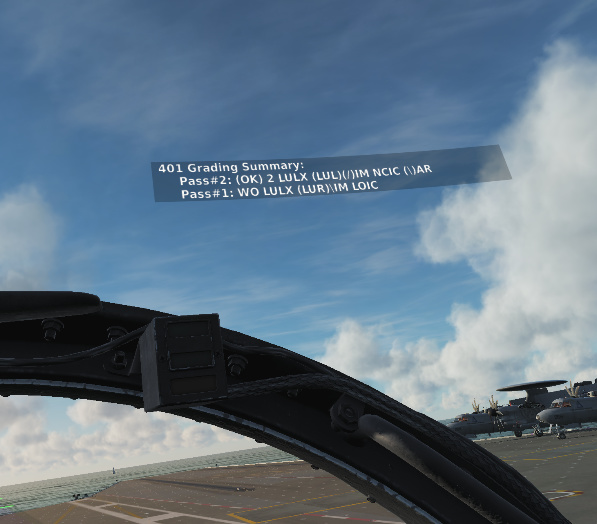 Pass #1: Let’s agree not to talk about that one, all sorts of chaos. LOIC is bad and people shouted at me to Wave Off while running for cover.

Pass #2: (OK) is a Fair Pass, so less lethal but no green dot on the board. A 2 wire this time with my line up a little to the left (came in a little sharp), but a good correction In Close, and still a bit of a ‘drop from sky’ at the ramp to spoil my grade.

The Hornet has the best minigames!

I hope there will be a DCS native LSO, some day.
But this is too cool to pass up. Must install!

I hope there will be a DCS native LSO, some say.

They (ED) hired a former F/A-18 pilot to voice the LSO and recorded all the lines last week.

They (ED) hired a former F/A-18 pilot to voice the LSO and recorded all the lines last week.

I can’t wait for the Naval ATC update in DCS.

Although a lot of Bothans died to get these grades with this wee script already, I am finding it really useful as a training aid. I hope the ED built one includes some sort of grading system as well.

And I hope it is compatible with a certain SFM plane
Hint: it’s tiny, it’s cute, I wouldn’t fit in it IRL, it is a great dogfighter but was mostly used for ground attack and its nickame is the same as the one for the Cessna 172

And I hope it is compatible with a certain SFM plane
Hint: it’s tiny, it’s cute, I wouldn’t fit in it IRL, it is a great dogfighter but was mostly used for ground attack and its nickame is the same as the one for the Cessna 172

As it’s written currently, this script would not. If I understood the jibberish correctly, it checks unit type and only works for the Hornet.

(Long In Groove, Wave Off Pattern) Basically I tried to cheat a bit and was more than 15 seconds or so in the groove. 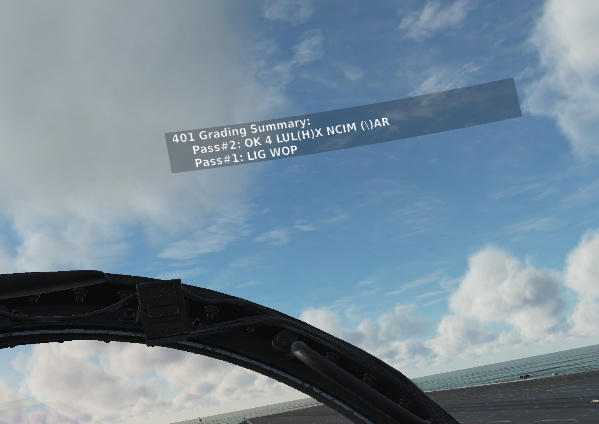 (posted in wrong place, as still in shock from the heavy petting in the F-14 topic…)

(posted in wrong place, as still in shock from the heavy petting in the F-14 topic…)

Yeah, that thread is a danger zone.

(it is funny to be more nervous when being judged)

Looks like some nice updates for this today. Keen to try it out when we put the pumpkins

This is the most involved procedure, but also the most satisfying when you complete the full sequence. The procedure requires you to request marshal from the CV, fly within the tolerance of the 5NM Marshal stack at your designated Angel (and change Angel as the stack collapses), exit the 5NM Marshal, and enter the Pattern. This approach can be done either as a Single Flight or as a Section (up to 2 flights).

1 ) Tune in to the CV Marshal Frequency. To check the frequency, go to ( F10 ) -> Carrier Menu -> ( F1 ) Carrier Comm Information. Look for “Marshal Freq”.
2 ) For Single Flight request for Marshal Approach: ( F10 ) -> Carrier Menu -> Find yourself ( F5-F8 ) -> ( F1 ) Request Marshal Single.
3 ) For Sectional request for Marshal Approach: ( F10 ) -> Carrier Menu -> Find yourself ( F5-F8 ) -> ( F2 ) Request Marshal Section. Note that your wingman needs to fly within 200ft from you to be counted as a Section.
4 ) If you are cleared for the approach, you will hear “[tail number #1] [tail number #2] Freedom Marshal, Angels [X]”.
5 ) Fly your designated Angels and hold a steady 5NM Marshal pattern above the CV (see the resources noted above for a description of this pattern).
6 ) If you hear “[tail number #1] [tail number #2] Push to Angels [X]”, it means that the Marshal stack has collapsed, and you (and your flight) have to push down One Angels to get Signal Charlie. Note that the verbal call will only be for flights in Angels Two, however, all flights must collapse to the appropriate Angel when this call is heard.
7 ) Signal Charlie will be called for you (and your flight) when you (the lead only) are approximately between 300°-330° to the CV and flying level at Angel Two and with the correct corresponding heading in the 5 NM Marshal Stack turn. If you are cleared to enter the pattern, you will hear “[tail number #1] [tail number #2] Signal Charlie Pattern, Check-in Button [#]”. Then tune into the designated Button (Channel #) to hear the LSO calls.
8 ) As you fly over the CV, you will hear “Check-in Clear” which will indicate that you are clear to engage the overhead break.
If you or your squadron is interested in going through the procedure, please send me a private message and I’m happy to walk you through in Multi-player.

Apparently the installation in existing missions has been simplied too, but that’s above my pay grade.

Played around a little bit with @MBot today. We don’t get signal charlie when trying Marshall approach. Do you know which parameters the script checks for?

After several tries it worked. I paid extra attention to maintaining altitude. Speed might also be a factor. We changed from 250 to 300 KIAS.