First, try changing your PID (3333) to something else, and resave to the device.

I have seen TLE sensors behaving badly when I have used several of them. The solution was to remove a resistor on the TLE PCB, and put a resistor between VCC and MISO, on the Teensy/Arduino controller.

Try the PID first, and I’ll dig up the details for the resistor.

Also, you are using an old MMJoy2 version. Might be a good idea to download the latest version, and update the firmware.

Edit:
This may be the magnet is offset. There is a setting for that, or you could try turning the magnet approx. 90°.

This looks like noise, what kind of filters/decoupling are you using?

wired from TLE5010 direct to ProMicro card…
should I be using something in between?

as I think I’ve said before, the mechanical stuff I can nut out, but the electronics are all a bit beyond me, but I’m slowly grasping some basics, and I have to keep leaning on friends with more knowledge horsepower than me…

What happens when you close a line between the micro controller and the sensor, is that a transistor stops sourcing or sinking it, but this leaves a residual voltage in the line that can float between ground and VCC causing ghost signals to be read.

edit, just realized that Troll and I are saying the same thing!

There are resistors on the TLE PCB already.
From your pic:

Try changing PID, turn the magnet and recalibrate and update to the latest MMJoy2 verion and firmware.

TAS, we had an oscilloscope and high end multimeter running off them and results on the scope were pretty clean
The results in the graph were fairly consistent too, perhaps too consistent to be attributed to any stray voltage, which would be more sporadic wouldnt it?.

*** Really appreciate all feedback - I apologise in advance
for stupid questions ***

Have been working with gadget on this.
The scope trace was pretty clean, didn’t analyse it deeply, just had a visual on the waveform with a DS1104Z
My money is on calibration or magnet position, agree that updating MMJoy FW would be wise.

Edit:
This may be the magnet is offset. There is a setting for that, or you could try turning the magnet approx. 90°.

We got some interesting results doing this, we almost had it right at one point.
I think you’re spot on.

Alright, I figured that graph was voltage swings as Gadget was holding it to a end position. Not sure what I am looking at then in that graph.

an additional note; I have 2 x TLE5010 sensors, and I replaced the original with the spare today, to eliminate that from the source of the problem.

Alright, so we can eliminate noise if the scope trace is clear. That leaves us with either a bug in the software which I can’t really envision, some sort of configuration error as Troll described, or the magnetic field not being strong enough. Have you looked at how much the magnet moves compared to the sensor, and does the field perhaps becoming too weak to get an accurate reading at the sensor itself?

No need!
This is what this forum is all about. 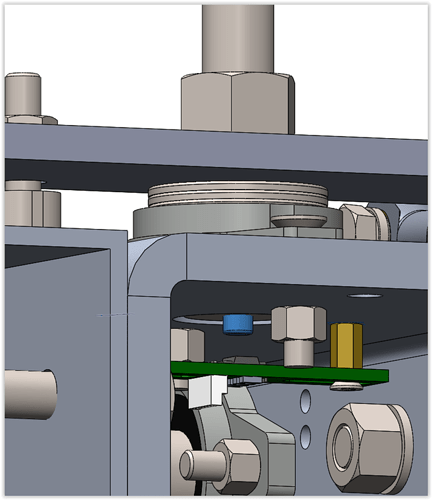 TLE5010_mount657×760 57.1 KB
magnet (blue) is mounted in small recess turned into the head of the bolt
TLE5010 is mounted on hex spacer nuts seated in drilled & tapped holes
pivoting bolt is sitting in a ‘collared’ self aligning bearing
I have packed the shaft of the bearing with stainless steel washers up to the pivot plate, to prevent it from allowing any teetering between the bearing and the pivot plate, its enough to stop any slack but not enough to seize the bearings ability to swivel at all.
As a safeguard I have also placed a piece of plywood behind the pivot plate to prevent any teetering, Im sourcing a piece of pactene sheet to shape a more suitable solution
original plate was a 12mm hole and bolt simply passed through and nuts secured it in place, I replaced this pivot plate with another identical except that I tapped the pivot hole to 12mm and the bolt now tightens down the plate and a second nut locks it in place.
Troll November 5, 2018, 1:15pm #81

Here’s a link to my Radar handle build, where I adress the resistor issue. Although I have never had this problem with just one TLE sensor, only when more than one is used.

You are using a neodymium/rare earth magnet, right?

i believe so, at least thats what the description on ebay stated…

having replaced the bearing at the pivot plate and replacing it with a sheet of pactene (nylon) sheet as a large shim to remove all possible pivot/spiral backlash, Im still unable to get theTLE5010 to behave in any manner resembling a linear output that I can use for the rudder controls

And you are certain you have diametrical magnets?
They stack like this. 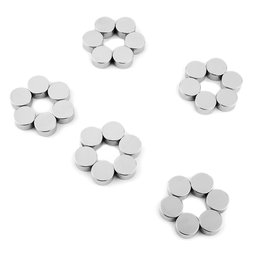 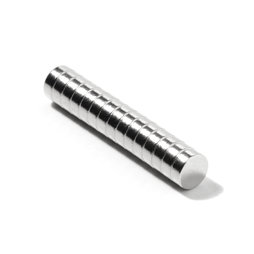