External views - crew or no crew?

Not withstanding the fact that you guys seem to overwhelmingly come down on the wrong side of the push vs. pull for collective debate…I’m curious what you think of flight sim models that don’t have pilots in the cockpit when viewed from the outside. Not to skew the poll (but I will)…I’m not a fan of empty cockpits. A few X-Plane designers do this (RWDesigns Twin Otter and FlyJSims 727/737 for instance) and it bugs me.

So what say you?

I’d be interested on absolutely any rationale of why someone would want it empty? Ghost stories? Sci-fi transporter scenarios? Maybe a modern-day Mary Celeste?

Best I got is that the dev may think ‘drawing people is hard’ and it’s polygon count or ‘not important, skip it’ work thing.

I think that is most what it is - believable people models are hard, increase the poly count…and if one goes with the stance of “well - if YOU are flying it…you have no reason to see the airplane from the outside”. I get that argument…but I do think that part of the joy of simulation is external views and fly-bys and all that good stuff.

Even my cherished Mi-2 from Mins does not have a pilot model…so when you fly the thing around it looks like an R/C plane. I went ahead and installed a pilot of my own…even though he doesn’t fit perfectly…I just think it looks better.

Fearless I’m with you. Any user please state the case for without. I’m not at all interested in why devs leave the aircrew out, because regardless what they say, it’s because it was last on the list below fuel filler cap and they said “ship it.”

But there needs to be a model. I don’t care if it’s a stick figure, Bart Simpson, or the Gazelle’s French Stay-Puf-Marsmallow Men, when I jump out to an external view and no one is flying the plane, I am O U T.

Third person viewing isn’t immersion breaking, because it’s a game. No one flying the 35 million dollar fighter in that game, totally is.

While it’s cool to have them, ultimately I don’t care about fancy animations or the pilot reaching up to the overhead randomly and looking around.

But I agree it should have at least a basic pilot model.

I will say that I really like it when more multiplayer intensive sims, like BMS or DCS, will track a player’s head movement and show that from the external view.

I want the pilot to be there in external mode. When one of the IL-2 patches modeled multi-player so you could see the other Players pilots movements which corresponded to the Players when online it really added to the immersion for me.

I want a empty cockpit, then again I remember when all pilot models looked terrible back in the day.

Does DCS do that already? I think someone mentioned somewhere that with multi-crewing in the Gazelle your head movement is used for the model your flying partner sees. I could be wrong on that.

It’s really cool to see a pilot’s body when flying in VR. I am especially happy when flying the MiG15 because in my rose tinted, virtual world I have lost about 40Lbs, just by putting on the headset

. It’s quite a shock when I take the headset off though

I think someone mentioned somewhere that with multi-crewing in the Gazelle your head movement is used for the model your flying partner sees.

It does. It uses the TrackIR or VR view info to move the other guy’s head model. Very cool.

I did. Come fight me you imposter-loving punk! EMPTY PITS OR BUST! 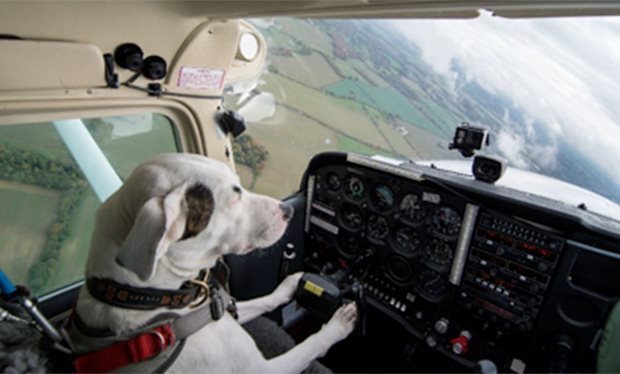 Not quite what I meant but that dog looks very competent!

So we can get both by putting a model of John Cena in the cockpit right?

cue You can’t see me

People building resin models often exclude pilots from the planes, it is to better show off the cockpit.
But then most people build the aircraft as standing on the ground.

I agree, in external view there should be a pilot.

AP and flight crew joined the party with the cabin?

Don’t pretend this does not happen

good, a fine empty flightdeck as it’s supposed to be. All is well.

Fun fact: Air Canada flight crews are not visible to the naked eye…something to do with a union dispute. So that is actually correct in this case.