Finally got a PS5!

I’m pretty much a console gamer now, not been on the pc in a few weeks and can’t see myself going back to chasing the hardware again and I’m no good at DCS etc anyway lol. Shame we can’t sell our DCS accounts…

I didn’t pre-order a PS5 as I didn’t really know it was coming out this year lol but then afterwards I wanted one. Obviously with the scalpers and everyone trying to get one was impossible until last Wednesday my other half got an email JD Williams (a sort of catalogue site) with a VIP PS5 offer. Went for it thinking I wouldn’t be lucky enough, she got an email in Friday saying we had got one of the bundles whilst I was reading that people were hearing the same from JD Williams and then having their orders cancelled so I still wasn’t convinced it’s get one. This morning she had an email saying it had dispatched and should be arriving in Friday. Came home from work at midday and at 2pm it was delivered!! I was a little excited lol

Hopefully I have a good unit and not one of the duff I’ve I’ve heard about. So far it’s great though 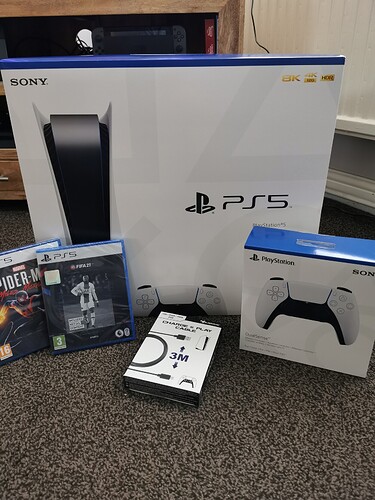 Looks like the situation is slowly getting better… maybe. GPU’s stopped becoming more expensive, too.

Hey! Happy for you man!

I am still torn between PS5 and Xbox X.

Also I need parental controls on it. Which platform is better for that?

I plan to order once they are available in normal quantity. Will stick to the PS3 until then.

With the Xbox series X and S the S has a lower spec than the X and didn’t have a media drive. The disc and digital versions of the PS5 have the same spec so might account for the price difference. As for parental controls in not sure but I’m guessing both will have something for this. The controller for the PS5 is great, definitely feels next gen.

I’m definitely going Sony on this one, but I’m waiting until Sony decides which NVMe drives are okay for the m.2 slot. 820GB is just not enough storage space.

Ya i was lucky (i think) to get one without a scalper about the same time. I primarily use the PS for war thunder which is the only mil sim (semi) available for consoles, and a cross platform game. I have been using after market JS, throttle, and rudder pedals on the ps4 for almost since it came out, Problem is the same accessories will not work on the ps5 (real bummer) . Sony says only the approved after market accessories can be used on the ps5 . I dont know if this will be permanent or will change in the future. it seems strange that they come out with a machine that is competitive with a pc (not high end) and they want to limit it to toy like accessories for it . i wrote a letter to sony to ask if this will change in the future, but did not get a response. anybody else in this predicament ?