Well there it is! I’ve been making my Macs play sims while begrudgingly bootcamped to Windows for half a generation. But it’s just not working anymore. Time to buy. I don’t want to build my own. I have the cash to get something nice but don’t want to get stuck in the rut of paying $$$ to stay in the top percentile of performance.

I am looking at maingear.com and the F131 they sell as a performance PC in a slim case. The first decision point is the CPU. They offer either the Z270 “Kirby Lake” or the X99 “Broadwell”. The second is more expensive and is described as “enthusiast” versus the “performance” tag given the Z270.

The next decision is the GPU. The default offering is an AMD RX 460 w/ 2GB. Things get quickly more pricey as you move up from there, adding $1400 for an Nvidia Titan X or $1425 for a Dual AMD Radon R9 Fury. The more moderate offerings are where my interests lean. This PC would be flight sim only and VR in the near-future is a probability.

I am grateful for any advice!

I was in a similar situation as you 2 years ago, except I did my own build.

However, when you look at flight simmers using VR, they talk a lot about their pixel density. Typically they fly with pixel densities between 1.6 and 2.2 in order to be able to read gauges.
What this means is that they effectively render the images for twice as many pixels as are in their Vive or Oculus. This means you need a beefier GPU than for typical VR games if you are to do VR flight sims.
This, combined with the fact that in order to not get sick, you may need to render at 90 fps (45 fps per eye), makes that I recommend eitherone of these options:

I would love for some VR users to chime in on the need for pixel density to read gauges and what framerate they need to not get nausea, as this is critical in deciding what GPU you want for VR simming.

Oh, and don’t go for the “enthusiast” CPU, just get Z270, that’s already pretty great and you won’t notice hundreds of dollars worth of difference.

z270 refers to the motherboard. The CPUs are 4digits. Kaby lake being the 7000 series, with the updated z270 mobo.

I know, but the CPU is generally tied to the chipset. You do agree with me on not going with X99 for flight simming though?

Yes, considering the $400 mark-up. And then a few hundred more to pick a decent cpu from the line. I went over to the website and I think the z270 with either a 7600k or 7700k will allow for a more than decent built for flight simming.

So browsing https://maingear.com for 10 mins I personally would go for something like this on a nice mid/expandable VR build pre-built from a shop:

Upgrade/downgrade steps for different bits can be viewed on the ever-useful site here:

Building a PC? These are the parts to get.

I went out and bought an Alienware Alpha with a Core i7 in it. That was it.

Time to buy. I don’t want to build my own. I have the cash to get something nice but don’t want to get stuck in the rut of paying $$$ to stay in the top percentile of performance.

As a compromise you can find a decent system for the $$$ that you’re wiling to spend, and then make a sensible upgrade or two. E.g., get a machine with a CPU and mobo that will last a while (see discussion above!) and buy a GPU to upgrade it. This sort of upgrade in a PC is remarkably easy and straight forward that even a Mac user can accomplish it safely;). If you shop smartly, you can upgrade your RAM later, too, if you want that option, although the risk/complication goes up a bit there.

I went out and bought an Alienware Alpha with a Core i7 in it.

Alienware gear is expensive, but not incredibly so when you compare what it takes to build it yourself. You get a whole heck of a lot of machine in a sexy box.

I KNEW you guys’d pull through! Hey Fearless, go ahead and pull the cord on that order. I’ll send you my shipping information by PM

One other question: Is there any advantage, VR-wise, to going with two GPUs?

One other question: Is there any advantage, VR-wise, to going with two GPUs?

No, I tend not to like that way personally, or rather SLI/Crossfire support is still bad in a lot of games and sims, plus the single card solutions are still better in terms of bang per GPU buck.

You are paying a premium for a shop build (that $2,400 is about half that in parts) but it does look nice and I understand that it’s hassle free and self-build are not for everyone.

Where I live you can pick the parts and for 4cents! they will check the parts list for you, when agreed put it all together, pre-install software and test it.

All you need to do is to bring it home, turn it on, enter the win serial and play.

There should be definitely cheaper shops around than the maingear.

…and my 2 cents… I bought and built last March and got two video cards for SLI - GTX 980 Ti, but removed the second card after just a couple of months - it wasn’t worth the extra temps and re-configuring the SLI after game updates.

I decided to build. Haven’t flown yet but happy so far. $$ 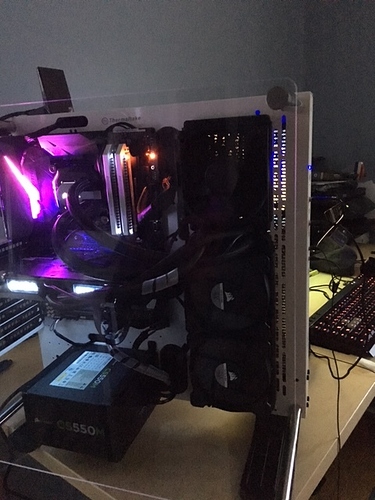 All great stuff but I still haven’t flown because I made the mistake of starting with DCS Nevada. That will be downloading into tomorrow morning. So I haven’t stressed it at all. That said, it’s super quiet–on par with my 2010 iMac with essentially a laptop interior.

Looks sweet! Can you take some more pics from different angles?

Hi Eric. I actually tried to post some shots but the forum software wouldnt let me edit. I finally gave up, erased the post and posted the somewhat terse reply that in no way reflected my pride in putting it together nicely. Pretty easy actually. I finally got DCS Nevada and ARMA downloaded. Liquid smooth! I’m on a trip currently so photos will have to wait. The open case is the schniz!