This is definitely a splurge moment. My logic on buying it now is simply that I use my computer a ton…and waiting six months for the price to drop $200 just denies me six months worth of gaming goodness. That’s the logic I’m applying anyway…

I’m moving to this from a GTX 760 - so I’m hoping for good things. I’ll install it tonight or tomorrow…but I want to run some benchmarks on my 760 in X-Plane and DCS and FSX for some comparisons. I’m not a hardware guy…so is there a standard (free) benchmark utility that means anything to anyone…or just use my sims with the same setup and scenario?

Very nice! You now need to upgrade your CPU, as the GPU is not going to be the bottleneck.

Without 4k displays it will probably run fairly relaxed for a while too, so bring on that Vive/Rift next!

Before you take out the 760, run and note down your 3D mark from something like this (Download free demo from the button on the right side of the store page, it’ll do 2 GPU and 1 CPU tests so just let it run and do it’s thing):

You now need to upgrade your CPU, as the GPU is not going to be the bottleneck.

So I don’t know anything about CPUs anymore. I gave up after we stopped tacking a 1 on the beginning of each “86” series. My current rig is:

Is that OK or is there a latest and greatest that would boast a significant improvement?

For a 1080p set of screens, and without overclocking the i7, you’re officially very high end now. The most economical next step would either be doing a cheap RAM upgrade if you are DDR3 1600 or overclocking (so many sims are single core obsessed). Overclocking with a simple sealed water-block is pretty easy and fun to do, and getting to 4.5GHz is do-able with a $100 H100 or something.

I know overclocking has come a long way. But I always think this will be the result if I try to do it: 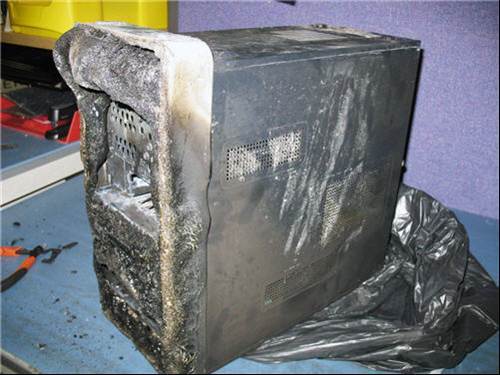 Cooling has become pretty commoditized and very safe now. Most of my cooling accidents back in the day were more cooling fluid leakages with nipped pipes rather than fires, so picture more that case underwater.

If your PC case has room then plonking on something like this is really simple. It’s a completely sealed unit, and just requires the same wiring as your CPU fan does now. They run quiet, plus I like the idea of a ‘water’ radiator on my PC, like an old car.

The do smaller ones too, but under something like a h100 it becomes a lot less efficient.

3Dmark is a good choice. But I also like to fly a course in DCS in both Caucasus and Nevada with the frame rate counter on (LCtrl-Pause I think…) and observe the frames I get - looking far, inside the cockpit and so on. Then I do the same thing with the new card in. Same plane, same course, and so on. Once you’ve done that and you are happy start dialing up some of the options if you didn’t have turned up with the old card and repeat.

Let me know how xplane goes. My CPU is older but if I’m upgradingthe GPU I’ll also be doing CPU so… I’m only running 2 monitors at 1080p too.

I picked up a 1070 last week and I havent found a game that wont run well in 4K. I can only imagine what a 1080 will do. Do yourself a favor though and boot up DCS 2.0 in 4k will everything maxed out…you will not be disappointed.

All the others seem to be $850-$980 too. So much for cheaper than the previous gen was. So much hype on the price, absolute failure to deliver so far.

Mine was $699 American dollars. Is the exchange rate that terrible?

I guess it has gotten that bad, because that’d be $920cad, so depending on model that’s possibly a direct price conversion.