So I was browsing Newegg when I saw a Corsair H115i. Since I had a problem with my H100i V2 overheating, I bought the 115. Its a refurb so it was on sale half price.
The problem with the H100i V2 was a simple one. Calcium had formed in the pump and it was preventing the pump from turning properly. I cleaned it out and temperatures went down by quite a bit. Two months later temperatures went back up. Last night the CPU hit 80C. My PC was in trouble.
By now my new cooler had arrived. If I needed an excuse to put it in, this was it. The two coolers look the same in Pictures. Do not be fooled, the 115 is way bigger. I was wondering if it would fit my case… but it did. (Cooler Master Cosmos). It was all done in about 45 minutes. I also installed Corsair’s Link software. I really like it. I guess if I had a complaint it would be the fans in the H115. Above 1800 RPM they sound like a Pratt and Whitney R2800. However, I doubt I will ever run them that fast. This thing runs super cool.
I miss the reliability of an air cooler. The lesson here is keep checking temps and don’t trust your AIO cooler.
And here are the numbers.
H100iV2 Idle 29C. Running Benchmarks 40-48C.
H115i Idle 24C Running Bencmarks 33-35C

I hope this helps someone out there. 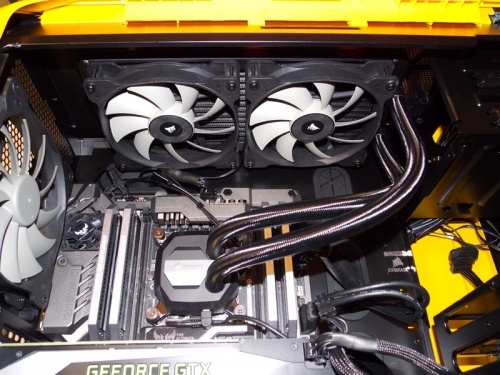 That’s a nice looking setup. I’m still aircooled on my machine, but I’ve always like the idea of liquid cooling.

How did you clear the old pump of calcium? Vinegar?

Interesting, calcium. But shouldn’t be there used distilled water?

The pump felt like it was grinding. I took out some of the liquid. Looks like automotive antifreeze. In it were some little grains of calcium. I must not have done a good job because it is bad again. Now I can take it apart and give it a good clean. I will fill it with Distilled water.

Btw I was just asking, I really don’t know what should be circulating inside, but I guess that automotive antifreeze is a bit overkill.
E.g in irons there is the distilled water used because of the calcium also if I remember correctly

I like the Corsair H60/100/115 range. They are completely sealed loop water coolers, and where water cooling used to be about levels and pouring liquid over motherboards, these are completely self-contained ‘plug and play’ units. It does make maintenance of them harder though, although I’ve got a H60 on one computer going for about 4 years now, so I think they just keep chugging. On four PC’s I’ve never had any leaks or issues, although like @Maico is saying, fans/pump motors will fail eventually. Nearly all modern CPU’s have TPP thermal protection limits, so if anything does fail it’ll shutdown ok. I use Speedfan to monitor mine, basically because I am used to it now, plus modern motherboards tend to have alarms etc you can set too.

On a PC self-build rather than buying a large CPU heatsink with fan I would definitely recommend using one instead, even if you don’t overclock. They are quieter, cool far better and there is no fuss associated with water cooling. A basic H60 cost is about the same as a decent heatsink and fan set anyway.

EDIT: I like on the link above the page title is ‘Don’t settle for a stock air cooler’ but the forum choked on the apostrophe and just said ‘Don’.