It’s time for a new rig (actually long overdue - my trusty 2500k / GTX 750 has served me well but now it is dying). So far I have a wish list sorted and a budget - I am going for Intel 12th gen. But there are two things i haven’t decided:

I welcome any comments you guys have.

I myself just bit the bullet on a 3060Ti last night! It’s, without a doubt, a much smarter investment compared to it’s 3060 counterpart, as much as a 30% performance difference! Also, the increase in RAM size is an effort to compensate for the 3060’s slower performance, and therefore shouldn’t be considered a benefit over the much faster 3060Ti…

Here are my thoughts that I considered when I was working on my build. I stuck with DDR4 for the same reasons you cited. Many of the Youtubers I follow, said that DDR5 is basically overrated and advised that DDR4-3600 is a good choice for mobo compatibility and performance. At the time I did my build DDR5 was not widely supported either.

Regarding the RTX 3060, I understand that the 3060Ti is the better performer than the 3060. Many of the people I follow, stated that the 12GB does not offer any real benefits and Nvidia was banking on folk thinking that more mem offered an advantage. Not the case, apparently. Full disclosure: I have a 3050 because I got impatient and jumped the gun when I should have waited. Had I stuck to the plan, I would have gotten the 3060Ti because the 3070 is just outside my budget.

Hope that helps, and good luck with your build>

It’s, without a doubt, a much smarter investment compared to it’s 3060 counterpart, as much as a 30% performance difference

It is if you actually need that performance. If not, you pay a premium for something you don’t use. Additionally, if you do GPGPU stuff on that card, 8GB of vRAM will bite you in the butt pretty quick.

Fair enough, looking up performance comparisons for myself came up pretty consistently that, by comparison, the 3060Ti was by far and above the 3060, and therefore a better FPS per dollar investment. As I understand, the 3060 and 3060Ti share the same 30X0 name, but are completely different cards. I made my choice based on VR performance, and so the 30% difference in performance made up for the $100 price difference. I can see where more VRAM may actually make a difference for things outside of gaming, but should otherwise be ignored as a purchasing factor, as it mostly exists to compensate as a VRAM buffer.

I can see where more VRAM may actually make a difference for things outside of gaming, but should otherwise be ignored as a purchasing factor

Are game textures getting smaller lately? Possibly improved DLSS? If that neural network don’t fit into your vRAM besides all that other stuff, you won’t be using it. That statement of yours i quoted needs a big fat “it depends” stapled to its forehead.

RTX 3060 12GB or RTX 3060 Ti 8GB? Obviously a 3070 or above would be preferable but I have a budget to stick to. I am primarily going to use it for MS Flightsim, X-plane, and Elite Dangerous. So better performance or more VRAM?

It depends a bit on how long you are planning to use that card. If you actually run resolutions/framerates where the higher performance of the Ti makes sense, then get that. Otherwise, get the 3060 as it’s a more future proof card when running lower resolutions (uses less power too).

To be fair, I’ve yet to receive the card, as I purchased it just last night, so I can’t say anything until I’ve properly tested it against my current 1660Ti. What sold me on the 3060Ti, was the sheer performance difference between the 3060 and 3060Ti, as I myself was looking for both 144 FPS 1080/1440 gaming, and more specifically VR gaming performance. The 3060 has a completely different GPU than the Ti, with much slower memory bandwidth, which is why most reviews conclude to believe that the 12GB bump is simply to compensate for the VRAM buffer, as the smaller bandwidth prohibits performance, specifically concerning the standard 8 GB’s on most current gen cards by comparison. But again, I can’t say anything until I can run some benchmarks of my own.

Here’s a good video example regarding memory bandwidth, explaining directly the difference between both VRAM speeds vs size, specifically the 3060: Thanks for all your comments guys, they were very helpful.

I thought about it for a couple of days and I figured the difference in cost for DDR5 was about the same as that for the Ti. So I figured I can go DDR4 and 3060Ti or DDR5 and 3060. DDR5 offers no advantage now but assuming it takes over from DDR4 then it will be cheaper and simpler to add more RAM in 5 or 6 years time with DDR5. But the performance delta at 1440p with the 3060Ti is around 30% for just a 10% increase in system price. So the question became one of performance now or ease of upgrade in the future.

Then I thought ‘F**k it, you only live once’ and ordered both the DDR5 and the 3060Ti! I’ll just have to work my arse off for the next month so my wife is in a good mood when she sees the bill

. Annoyingly, prices had increased in the couple of days since I first posted and the video card I wanted had sold out so I had to fork out a bit more than expected. All-in-all it’s been a bad day for my wallet.

Don’t forget a spa day for your wife. I always pitch one in whenever I do big purchases. Some might say bribe, I say “thanks for supporting my addiction.”

Here she is at last: 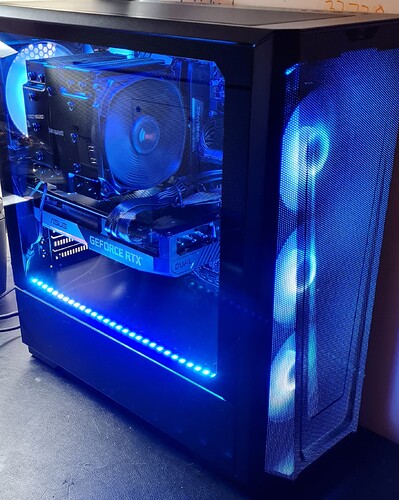 I’m quite pleased with how it turned out. The Be Quiet cooler is much prettier than the Noctua D15 I had on my old 2500k.

Incidentally, I went with the 3060 Ti for the extra performance in the end. I bought everything on next day shipping but after a week with no dispatch email I started to wonder what was going on. I phoned customer services and they told me that the Ti was out of stock with no expected delivery date. I was a bit terse with the poor guy because I had made a point of only choosing in-stock items. As a concession he bumped me up to a 3070 for no extra charge.

My setup is quite similar except my case is solid metal and no lights. Otherwise the configuration is the same with the PSU on the bottom and 3 big fans in front.
Well, I also have a door to cover them and the DVD drive that can be open or shut, so you don’t see the fans. My CPU cooler is much smaller, although I do have a 3070 as well.

I’ve had the 3060 Ti for a couple of weeks(ish), and a quick and dirty observation on performance, as compared with the 1660 Ti is as follows: Performance in 1080 / 1440 is surprisingly close, with the 3060 Ti allowing for more headroom with better anti-aliasing, and the option to use super resolutions (upscaling) without any performance loss! Where the performance really makes an even more significant difference, however, is VR! I can finally use higher pixel density values (more than 1.0!), and the option to turn off ASW (if the software allows it) is a really big deal! Image quality in VR (Rift S), is now finally good enough to feel comfortable, especially when looking at cockpit displays! DCS is still power hungry, and doesn’t quite benefit as dramatically as other software titles, but the improvement is still quantifiable, and the difference in image quality makes a huge difference! My official review; Worth every penny, even if just for VR!

I haven’t really tested out the gaming performance yet - this is officially a replacement for my dying work laptop so getting the work related stuff sorted first is politic. However, I can say a couple of things:

Here she is at last:

btw selling my rig. oc you cant have similar performance in laptop size but somehow I am happy with my decision to go laptop …

there really isnt any company doing it commercially ? …