Question for US based RL pilots: GPS interference testing

You guys probably received an email from FAASafty.gov this morning with the subject line: FLIGHT ADVISORY GPS INTERFERENCE TESTING December 4-13, 2016 - Off the coast of Charleston, SC. Given that the published “cone of silence” begins in relative proximity to a major metropolitan are with a fair amount of air traffic, have you ever had this effect your operations? I know that I suspected issues flying a drone equipped with GPS nav during similar NOTAM periods. I.E., had trouble getting a fix.

There was a big test recently on the West coast. It affected a large area. It is not uncommon for similar testing to happen around the White Sands range in New Mexico. I have lost GPS in that area a number of times. Not a huge problem for the airplane I fly as we have IRS. It’s a bigger deal for the domestic airliners as they have to revert to good old VOR navigation, or, if ATC is able they often give vectors.

Here is a link to an article about the previous test.
http://www.avweb.com/avwebflash/news/GPS-Interference-NOTAM-For-Southwest-226365-1.html

There is an interesting note about the Phenom 300 that was issued with the NOTAM for the previous test.
“Due to GPS Interference impacts potentially affecting Embraer 300 aircraft flight stability controls, FAA recommends EMB Phenom pilots avoid the … testing area and closely monitor flight control systems".

I’m sure the Phenom 300 guys be avoiding the area!

Embraer needs to rethink their design philosophy if GPS is that integral to the airplane’s safe operation.

Very interesting regarding the Phenom 300, which is obviously the major player in the light biz jet category. I wonder if the stability control system uses GPS as one method of spacial awareness, similar for UAV flight controllers? One in the column for the CJ4 I suppose.

Sometimes airplane designers can over-think a problem. There is a lot to be said for the KISS principle IMHO.

A quick Google search led me to this document on the Phenom 300. Interesting reading.

Regarding UAV’s, I know my Phantom 3 loses stability if it doesn’t have a good GPS lock. You can switch it to a manual mode though. It just relies on solid state gyros at that point.

Holy smoke! One would think that like your Phantom 3, if it losses or can’t hold lock that there would be a way to drop back to mode that doesn’t rely on GPS, and that it would also be automatic in the case of the described condition.

When I say that the Phantom 3 loses stability, I guess a more accurate description would be that it loses the ability to stay in position. It is no longer able to compensate for wind drift. Effectively it just becomes a regular RC quadcopter at that point.

Ask me how I know.

One would think that like your Phantom 3, if it losses or can’t hold lock that there would be a way to drop back to mode that doesn’t rely on GPS, and that it would also be automatic in the case of the described condition.

The issue is the cost of that backup system.

Just about all navigation systems use some sort of Inertial Measurement Unit (IMU) which consists of gyros to measure body angular rates (sort of like pitch, roll, yaw) and accelerometers to measure acceleration. A non-GPS navigation system (aka “strapdown navigator”) constantly integrates the measurements from these sensors to get attitude and position (and velocity and body rates and other useful bits of info). Guidance and autopilots will use this solution to determine which thrusters, propellors, fins to waggle and maintain stability, course, intercept a target, etc.

No sensors are perfect, and gyros and accelerometers all have biases (constant errors), measurement noise, and a whole slew of other errors that will compound into the nav solution, literally getting worse with every measurement. With high-performing (and high-cost!) sensors, this drift can be pretty low, keeping the navigation solution useful for a while, while cheap sensors may have errors so severe that the navigation solution is garbage within seconds.

With GPS aiding, a smart navigation system can detect and correct those sensor errors by comparing the navigation solution to the GPS measurements using the magic of Kalman filters. The errors aren’t completely removed, of course, but usually to a pretty good degree, good enough that a system can operate pretty well for a long time with really poor sensors that would otherwise kill an unaided navigation system.

Now if you take an aided nav system that has those cheap but awful sensors and deny it GPS, the very system it depends on to maintain a decent navigation solution, you will get bad behavior. How fast the system degrades will depend on the quality of the sensors, which is why you’ll see navigation systems rated as “XX meters drift per YY time slice”.

Unfortunately, the difference in cost for sensors that have lower drift is significant, and can quickly reach thousands of dollars, which isn’t a very good solution when you’re trying to sell your UAV on the order of $1,000!

Great info Erik. On the Challenger, when flying across the Atlantic, I always liked to add the IRS position markers on the MFD map. It was interesting to see the way each of the three IRS’s drifted over the course of the crossing and it was obvious if one was misbehaving. We can’t do that on the Global XRS. All we get is a readout for each IRS with Lat/Long estimate and drift rate. Another reason why I miss the Collins avionics suite vs Honeywell.

I hear what you are saying @EinsteinEP; but one would think that with the preponderance of cheap IMUs and accelerometers (in every smartphone) that a backup system for a $9m airplane wouldn’t be out of reach.

I had an interesting cocktail party conversation not too long ago with a person whom purportedly worked for AT&T in their UAV dept. (I didn’t know they had one either). He said that they were working on a “drone” that would have some intelligence in the flight controller that would keep the aircraft out of controlled airspace, which would solve the UAV/manned aircraft conflict issue. He was surprised when I told him that my year old consumer grade DJI Phantom 3 Pro already does this. In fact that it wouldn’t let me engage the motors if I was within 5 miles of an airport (there are workarounds

) . I suppose that I shouldn’t be surprised when there is a disconnect between the big industry/military and what is being developed by traditionally B2C (Chinese companies mostly) companies and home tinkerers. A consumer can buy for under $50 a programmable flight controller with onboard IMU/GPS/barometer/accelerometer that can manage a UAV, either controlled or autonomously, over many miles.

AT&T, Qualcomm Want Drones To Stay Online Even When They're Beyond Line...

AT&T and Qualcomm look at future where drones can operate outside the line of sight and stay connected to the internet using the carrier's LTE networks.

One would think that with the preponderance of cheap IMUs and accelerometers (in every smartphone) that a backup system for a $9m airplane wouldn’t be out of reach.

The “navigators” on smartphones wouldn’t be able to keep a plane in the air for very long. Low-drift sensors that could operate for the duration of a civilian air transport flight, even that of the Phenom 300, are going to be expensive. You can add some external updating equipment, like the DME update feature on the CIVA INS’s, but that’s still additional cost, weight, maintenance, etc. - quite a bit more than a cell phone!

EDIT: I’ve been going on and on about “navigation”, but the issue in that FAA “telegraphic message” was that the yaw damper system of the aircraft fails without GPS, which seems like a pretty risky design choice. Without understanding the details of their design, I also feel like it should have been relatively low cost to provide a yaw damping capability that doesn’t require GPS.

Maybe they were really cutting corners on cost? Being honest, it seems to have actualy paid off - how many millions of flight hours has that aircraft successfully completed with this cheap yaw damper system?

I suppose that I shouldn’t be surprised when there is a disconnect between the big industry/military and what is being developed by traditionally B2C (Chinese companies mostly) companies and home tinkerers. A consumer can buy for under $50 a programmable flight controller with onboard IMU/GPS/barometer/accelerometer that can manage a UAV, either controlled or autonomously, over many miles.

Difference being that big industry and/or military applications need to have reliability rates well above and beyond consumer level products.

You can go grab a Naze32 for $25 and it’ll make your quad-copter zip around just fine.

Would you wire it into a Cessna and stake your life on it both working and getting you where you need to go? Probably not.

Edit: PS, the DJI Phantom looks really cool, is it fully autonomous or does it need to be remotely controlled?

Edit2: Despite all the above… Embraer 300’s truly are that dependent on GPS for general stability? Bold move Embraer.

I flew to CHS today twice. I think I saw a UFO off the coast. 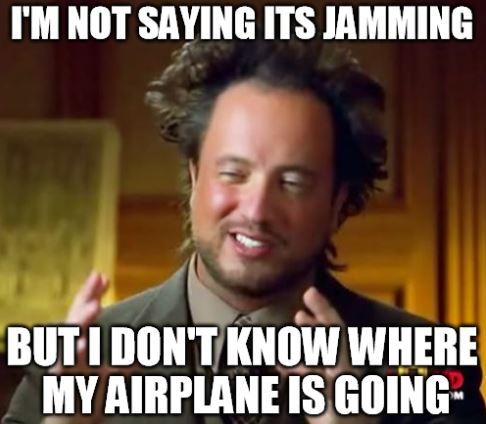 Holy smoke! One would think that like your Phantom 3, if it losses or can’t hold lock that there would be a way to drop back to mode that doesn’t rely on GPS, and that it would also be automatic in the case of the described condition.

Well, there’s a reason everyone in maintenance knows EMBRAER to mean “every mechanical breakdown requires an electrical reset”… They do have a bit of a reputation for being a windows’ish kind of aircraft software wise.

They do have a bit of a reputation for being a windows’ish kind of aircraft software wise.

Nah, airbus is just really automated. Although not really any less then Boeing, Boeing is better in keeping up the illusion of being in control.

I would definitely say, that my experience with mr airbus has the qrh computer reset table well thumbed.