Hi guys, I’m seriously contemplating dropping about 300 eurobucks into a further 16gb of ram and a cpu swap.

Basically, a faster CPU and more RAM, and SSD, will give you a better DCS experience.

What kind of performance difference did you see?

I haven’t done any scientific studies, comparing the two with a specific mission benchmark, or anything.

The difference I have noticed is that the new PC maintains 90FPS for longer, at graphic settings that I like, and doesn’t drop into 45FPS ASW as often as before. My main sims are DCS and IL-2.

It seems like every other update demands more from your hardware as well. DCS is now forcing deferred shading on everyone, for instance. And that doesn’t play well with MSAA in VR, so it’s hard to make any definitive calls on the performance increase from a 4790 to a 8700.
Over all better, but still ways to go for max settings, in VR.
Both the above mentioned sims seem to like good single core performance. The faster the better.

Well things like MSAA are very much exclusively done by the GPU. So you will not see CPU or main memory (RAM) have any difference to that. On the other hand things like asset loading, texture streaming, AI and simulation processes are all quite dependent on CPU and RAM.

That said, I just ordered the bits. I hope the box will hold out in this configuration until at least the next big upgrade, a new GPU in a year or so. The 1070 is sufficient, but I foresee its obsolescense in about 12 to 18 months.

It should arrive tomorrow and I’ll report back on the effect (if any) for posterity.

MSAA are very much exclusively done by the GPU

Yes, but it seems to be a problem associated with deferred shading and MSAA, and now we can’t turn off that, which is especially troublesome for VR users who may need every FPS they can get.
It was just to illustrate that the hardware requirements are increasing, which is nothing new, of course

I upgraded from a 970 to a 1070 sometime when 2.0 got deferred shading, and going from 3gb to 8gb made a massive difference. I only play on 1080p, so I can only imagine the kind of monster rig required to play in 4K or VR.

I used the reg tweak to turn off completely ASW now even if I have low FPS >30 <45 I dont get any kind of rough running. Its all smooth and if its only single player learning/sightseeing or running instant action missions I have everything ramped up.
For MP I press the VR preset and everything is good to go although it looks less than perfect I don’t mind when I am flying with friends. 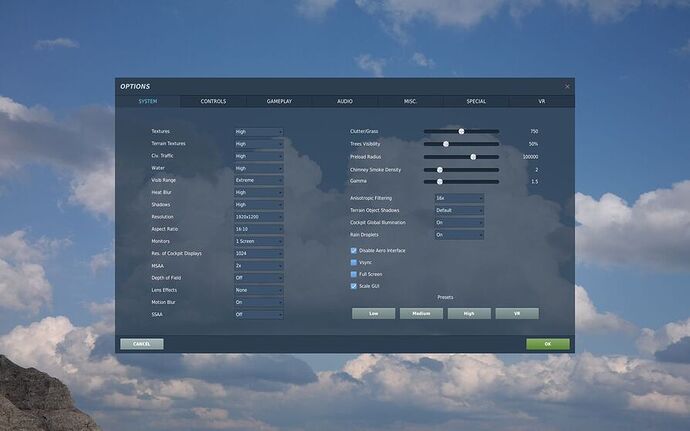 I use the keypad commands. I sometimes prefer ASW off, especially in prop fighters.

“No, spending that money would be silly, you should be reasonable in your sim spending”.

I’ve realised I need to invest a bit in hardware since starting to play with X-Plane…I bought a pay ware plane (Super Cub) having so far only really flown the default planes and REP Cessna…turns out the frames drop to unacceptable levels as soon as you have a slightly hungrier module.

Kind of bizarre as DCS 2.5 runs fine (well, 30 frames over cities) and looks like a million dollars in comparison…but alas, probably time to get a new GPU.

Good luck with your upgrades

So i plonked in the cpu and ram today. Getting the cpu to actually do what its supposed to do took a fair bit of fiddling and tweaking and googling. I have it running at 4.6 ghz now and together with the extra ram went from medium visibility range to all of the visibility range. oh yes. the gpu protests a little but its shiny as all getout.

now i’m going to build a bunch of scenarios that have all of NATO fighting the entire combined airforces of Iran, China and Russia in one climactic, apocalyptic battle.