So you think you're fast at typing?

I hate to do this to you guys but how fast can you type the alphabet?

How fast can you type alphabet? Learn every letter on the keyboard while trying to beat your fastest time at typing A to Z.

I expected nothing less @fearlessfrog.

I think with practice it could be a couple of seconds, like two chords of 13 letters etc. I’m not very fast, and still peek down.

I know but who ever practices the alphabet on the keyboard? It could actually be a good thing!

Have you seen the high scores?

Thankfully they didn’t ask me to spell maneuver…

Have you seen the high scores? 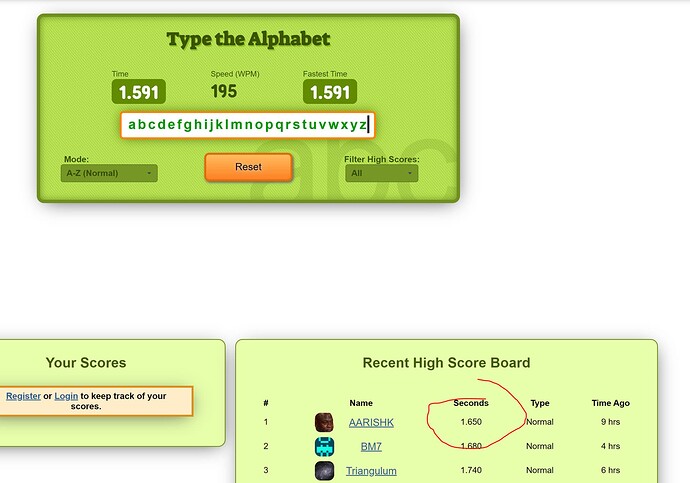 Too much CLI LOL.

I remember reading years ago that the QWERTY keyboard layout was intended to slow down typing speed on the old mechanical machines.

Its an arrangement of the keys to have an balance of the frequently use chars and to avoid the 2 keys get stucked togheter on mechanical write machines. Existed many old variants because querty in some languages got some keys stucked frequently.

The evolution was really funny and, contrary with many people, i love history, not only because have fun facts but also because it helps to you understand why what we have now.

As a short story, we had the pure mechanical, it was a bad thing when in the final of a huge and important document you did a typo mistake, so you should do all again from zero, the importance and responsability was high. If was only a uninformal doc, you go back and write capital XXXXXXX over the typo and write correct after.
Later i remember that they created a special tiny pieces of paper that absorve the chars paint, so, with some skills you reposition your doc in the same position of the typo and type again the same chars with that special paper. The hammering of the chars in that paper over the doc, shadowed or “removed” the typo and you could later write correctly over it.
Later some special typewrite machines also have a tape with a film that have the same effect as this special paper.
When we start to have the introduction of electronics in typewriter machines, it records all that you typed and if you want to remove, you had a special key and it goes automatically to that place and use that special film to remove it.
In the last end of advanced typewriter machines from Olliveti and some other brands,we have some machines that included a small digital display. There you first write all your line there, see first if its all ok and fine, then press a key and the machine fully automatically write all the reviewed line on the document, dramatically reducing the need of correcting the paper.
Finally the same Ollivetti, IBM, Unisys, Amstrad, DEC, … started to introduce many “affordable” personal computers and it was the end of typewrite machines! Some typewrite brands known how to adapt, but others unfortunately died. After years, we still saw some typewriters used in some hard rigid burocracy departments with some mummies using it

I think using a macro software or a nice hotas warthog profile beat that 1.650s easily

I also remember getting those swinging hammers stuck. We had an IBM Selectric at one point, but another one that I remember is the machine that my parents bought later with a daisy wheel print head (looking at vintage word processors was probably a Brother). It also had a single line display. LCD maybe?

Anyway, the idea was that you typed ahead of output and it didn’t begin physically printing until you had filled the buffer. If you made a mistake, you could correct it before the machine committed it to paper. In that regard, you were supposed to look at the display instead of the paper, which took some time adjusting to, perhaps because you didn’t trust it. The thing was revolutionary IMHO. I remember writing a number of papers for high school and college freshman year on it.

If memory serves, the first home printers were not that far from typewriters in form. Daisy wheel printers anyone?

I learned on an IBM Selectric, which is still a blazingly fast machine if you have the finger speed. Type balls and all the mechanical engineering that go into it are still fascinating to me today.

If you have an interest in that sort of thing, and keyboard designs, I’d recommend doing some research into both stenography (for how to type a whole lot faster 200-300 wpm) and linotype machines (for some absolutely crazy engineering to set type in real time).

I learned on an Underwood mechanical typewriter, and yes, the keys would jam together sometimes. Never got to use a Selectric, always seemed fascinating.

The tail end (VWXYZ) is hard - seems to refuse to roll off naturally. I think I’m spending at least half a second trying to find those keys.