The Battle of Brisbane, or: I Went To Australia, and All I Got Were These Lousy Stings

Today marks the ten year anniversary of the Battle of Brisbane, in which the gallant nukes aboard USS Ronald Reagan faced off against unrelenting swarms of Box Jellyfish launching massed suicide attacks against every seawater intake on the bottom of the ship. For four days and four nights, we sacrificed life, limb, and liberty to keep the ship running so our Battle Group Admiral and Commanding Officer could undertake their vital mission of hosting parties and posing for pictures for local dignitaries.

IT might be one of the world’s most impressive displays of military might, but the USS Ronald Reagan is no match for Queensland’s jellyfish.

Some capabilities aboard the 97,000-tonne, $5 billion aircraft carrier were disabled after the blubbery invertebrates were sucked into its condensers while docked in the Port of Brisbane.

Condensers are used to take in water from the ocean and cool down the ship’s engines.

A spokesman today confirmed the slimy creatures had caused problems during incoming tides.

“The impact was minor and required shifting of electrical generators in order to clear the fouled inlets,” he said.

"The fouling by sand and biologics is a common occurrence which the ship’s engineers are trained to counter.

“At no time was the ship or environment at risk and we remain capable of fulfilling our mission requirements.”

The nuclear-powered ship suffered a similar problem in June 2004 when a main condenser was fouled with several hundred squid and octopi following a four day port visit to Valparaiso, Chile.

But the jellyfish couldn’t completely put the brakes on the Ronald Reagan as the “floating city” today set sail after five days of offshore leave.

Around 6000 crew spent their time soaking up Brisbane’s pubs, clubs and tourist attractions.

In turn, hundreds of fascinated locals queued for hours and caused traffic chaos to catch a glimpse of the warship.

A handful of people today protested its presence but their plans to kayak out to the “killing machine” were thwarted by tight security.

“The police stopped the kayaks going out to the waters … they said that the whole river was an exclusion zone,” Brisbane Peace Convergence spokeswoman Treena Lenthall said.

The Ronald Reagan left San Diego on January 4 and is on its maiden deployment. Brisbane is its first foreign port of call.

The warship stands 77m high from the waterline, 344m long and the flight deck covers 1.82ha, housing an air wing of 80 fixed wing aircraft and helicopters.

It will now conduct naval operations in support of the war on terror as well as security commitments in the western Pacific.

Sounds like it went better than the Great Emu War, though. 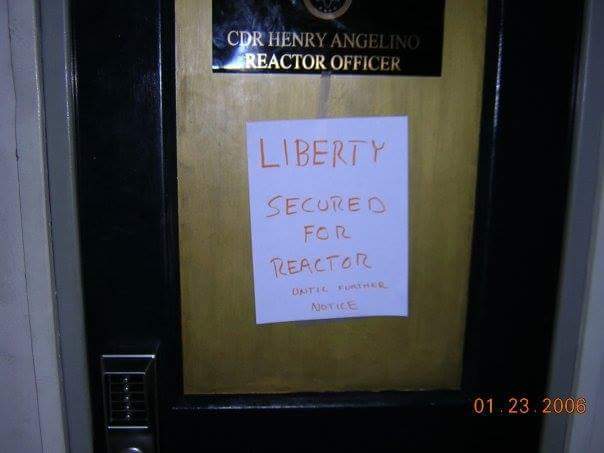 And yeah, we were about as successful as the Australians in our attempts…