I never thought about scraping the canopy up before! I bet that made the crew chief/plane captain/whoever owns a USMC aircraft very happy…

Was that relatively common, and did they buff out fairly easily?

Was that relatively common

also, was it a “i am in trouble” offence or just one of those things that happens

No, it was not unheard of, considering the head of the probe is almost exactly abeam the canopy
in the Harrier. If it swings or you get the lip caught, it’s not too difficult to give the canopy an accidental schwak.

Typically if that did happen, and it did not happen all that often, you might get a couple of mars on it that would buff out of the plexi. On rare occasion, it would shatter the canopy entirely.

And then things got loud!

The more expensive the damage of course, the more people noticed.

The more expensive the damage of course, the more people noticed.

Ain’t that the case!

I haven’t done any aerial refuelings in a while so I thought I’d share my first attempt in months with you guys. What you can’t see because I forgot to enable the control indicator is that my throttles are in constant motion while I’m hooked up to the tanker. I forgot to enable the control indicator is that my throttles are in constant motion while I’m hooked up to the tanker.

Bypass the control indicator man! Just know that you will be moving the throttle the whole time you are tanking. Its normal. No such thing as setting “a speed”.
For me, i just find a spot to focus on when tanking. I then keep that spot in my face the whole time. The joy moves a lot in smalll, small increments. The throttle is the same. I hook up then keep moving it back and forth a lot… in small increments.

Obviously you and I know this but I have often had people voice surprise when I enable it to show them that they can’t have it simply sit in one position, even for just a second or so.

I have more than once gotten a “wow” in response to my throttle movements from people who have never managed to refuel in the air.

There are those who do and those who think they know…

And there are many that avoid it at all cost. I used to be one!

I don’t know….The real life Basket looks Twice as Big to Me??? 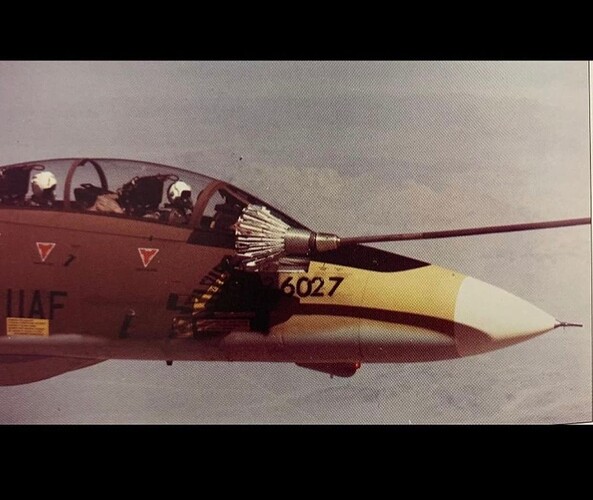 You guys have been incredibly helpful tanking in the Tomcat,Those Tips between A and B engine management made a Big difference for me.Thank You.
I’m moving on to try my luck with The Viper.