While yokes and throttles that replicate civilian planes hold little interest for me, flying only combat sims, pedals are pretty universal. Left right and toe brakes and you’re set. I’ve also seen some sticks and throttles that are more combat appropriate over the years.

However, the BIG sticking point for me has been how many of these are small-time Euro builders with little to no retail presence in the US. Sort of a “wary of using a credit card on their site/trusting they will ship it/arriving in good condition” trifecta of concerns for them.

Any testimonials from local 'Spikers, especially US members, on which ones you’ve used and your experiences? This isn’t so much about just how the stick/throttle/pedals worked (although that’s part of it) as much as the reliability and trustworthiness of the process to actually buy and receive them.

I sent my money to Milan at MFG and he sent me a pair of MFG Crosswinds to Auckland, New Zealand.

Took a deep breath before doing it, just because of the small overseas manufacturing business nature - but all went super well and I’ve never seen any forum posts of delivery/payment issues with others either.

If anything, I think you’d be in a better position with MFG than the big names if something went wrong, because you’re dealing with the business owner himself and his brand is on the line.

I had a refundable issue with Saitek a few years back which did get solved but the process took months and multiple follow ups…in the end they just paid me to go away I think.

As for the quality of the product, the Crosswinds are just perfect. Sturdy, well made and accurate. Also very adjustable.

I can also vouch for MFG… a flawless transaction.
I have also purchased from VirPil on two occasions with no problems.

Second everything here, save for my pair was shipped to the US. This was many moons ago, but Ive no reason to suspect his customer service has slacked below “excellent”.

My sole order from Virpil went well too. Id say any of the vendors around long enough to have a reputation can be trusted. Any business could in theory go under overnight, so Id say the risk is no greater with the established guys.

I needed to replace my Saitek x-55 joystick and asked around here too. Paul Rix (a fellow Ohioan:)
convinced me to look at Virpil. And I couldn’t be happier!

They are a small, but growing, company so my purchase was on back-order for almost 3 months.
But, as stated on their website, they didn’t charge my credit card until material was on hand - and I checked my credit card every day for malicious activity, there was none.

Love the MFG Crosswind! If you are desperate, the X-56 is a cheapish HOTAS that can hold you over while you decide/wait on something of quality. It has provided me with good service for 2 years of heavy use. Advice for the MFGs that might work for the other vendors: do NOT use the Microsoft game controller app for a quick calibration. Doing so will cause odd spikes and errors that appear identical to a bad pot.

3 separate orders from Virpil and 2 from Sim-Lab in Holland, all showed up without drama. Other items from vendors shipped via post office have gotten entangled in customs in the states for up to a month. Due to COVID-19, the USPS is having trouble clearing items through customs, something that the express carriers have avoided. DHL, FedEx, UPS all seem to be on schedule.

Slaw Device Pedals has been a good investment for me. He was helpful and very professional. The packaging was excellent. I had some CH pedals and some Saiteks. They both wore out in about a year or two. I just used them a lot. The quality did not stand up. I have had the Slaw pedals for almost 4 years. I really like them and they feel extremely solid. I know I may someday replace components but the pedals will be with me forever. Almost everything is steel so they weigh a ton. The base is heavy. The 109 pedals are metal and have been beautifully painted. 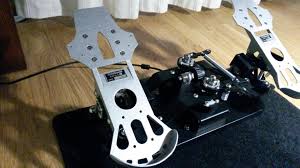 Virpil has been really good to me. They delivered to the US with no issues. They pack their stuff well. I got a base, Mount and a stick (T50) and I am very impressed with the quality. They are on point with everything from software to support. I think the base will last forever if I dont do anything silly to it. I just ordered a keyboard holder. Its really neat. I am waiting for delivery now.

So the consensus seems to be that other than some possibly extreme shipping delays, no one has had any bad experiences with any of the main alternative OEMs.

That is definitely encouraging. I have an all-Saitek-as-bought-by-Logi setup now, X56 and flight pedals, right now the pedals are the only ones I find unsatisfactory, perhaps because they’re a bit too light and seem to have TWO centering positions. If I push left and let it return to center, it’s in the left center, if I push right and let it return it’s in the right center. The two spots are about 10 apart on the calibration meter in the MS app. I have to pick one to be “center” by always pushing left a bit again after pushing right, for example. Annoying.

I had the old TM pedals for 15 years and with regular pot cleaning it was great aside from lacking toe brakes. However, once I gave up the Cougar I couldn’t use a gameport connector any longer.

I wish Saitek/Logi made flight pedals as well as the G27’s racing pedals were made. Had those 8 years now and they’re still flawless, although I don’t race all that often, but it’s still hundreds of hours.

I mean, given how rabid passionate the flight sim community is, I would think that any shady business dealings would be plastered far and wide all over the interwebs. I’m also looking at Virpil, and given the lack of any of those sorts of warnings, I figure it’ll be fine.

no one has had any bad experiences with any of the main alternative OEMs.

I object to the use of the word “any” here. As you state it, nobody who offers jpegs of a sweet flightsim peripheral ever will be a grifter. That can’t logically be true.

But, of the established ones, such as MFG, virpil, Vkb and Slaw, none of them are grifters. They are all bonafide specialty manufacturers who love and take pride in their products.

For the unknown ones, and the new entrants, well, caveat emptor baby!

Virpil, with whom I’ve had some dealings are awesome. The quality of their product is 9/10 and their service is every bit as good as can be expected from a small boutique in Belarus.

For the unknown ones, and the new entrants, well, caveat emptor baby!

This. The new entrants are risky, but there I’d pay close attention to the ‘publicity trail’ leading up to release. There are easier ways to scam people than spending a couple years updating development blogs/forum posts and setting up an international web store. Still, one simply needs to either wait and let others check them out, or acknowledge that there’s some managed risk on new suppliers/products.