Hey Maico, do you mean G-SYNC in the nvidia control panel? Lately I’ve noticed DCS not looking so well In VR, and I didn’t think about G-SYNC, which I definitely use in 2D. I pretty much leave it on 100 for everything. Will try disabling.

Sorry @chipwich, my monitor is not Gsync and I don’t have that in my Nvidia Ctrl Panel. I did everything described above. It made DCS and IL2 look good. Then I disabled V sync in game options and in Nvidia Ctrl panel. BAM!!! Big increase in Fps. Try it.

Im using 2080ti and i was a mess. Thanks Norway! Your suggestions got me there.

Im using 2080ti and i was a mess. Thanks Norway! Your suggestions got me there. Biggest pain was disabling reprojection. Once that was done I put VR ingame setting Pixel density to 1.0 in VR Tab. Turned off VSync and now I’m at 90fps.

Vsync was messing with me as well after a recent patch, could be driver related, not sure. Disabling it made VR silky again.

This bit might help DCS a fair bit on VRAM usage, will try it to find out:

Unfortunately, a stutter-fest for me. DCS VR preset. Similar dissatisfaction in the first 6 comments in Steam. Wondering if it’s Win10 related.

I tried it and it seems ok. I wonder what’s different? I do have reprojection off in DCS.

I dropped out of beta before trying that. Back to normal, but I could try beta again and disabling reprojection. Back in a minute…

It seems to use about 500MB less of VRAM in DCS and a bit smoother.

I would run reprojection but I never sorted out why SteamVR would just crash out and sort of gave up on that. I figured I’d need to reinstall Windows and couldn’t be bothered to go through all that for a while.

@chipwich - one thing that might be worth trying is either in VR via the Steam dash or just direct via here:

C:\Program Files (x86)\Steam\steamapps\common\MixedRealityVRDriver\bin\win64\OpenVRSettingsUX.exe
(depending on where you have it installed in Steam).

…you could try switching off the new GPU memory optimization thing. 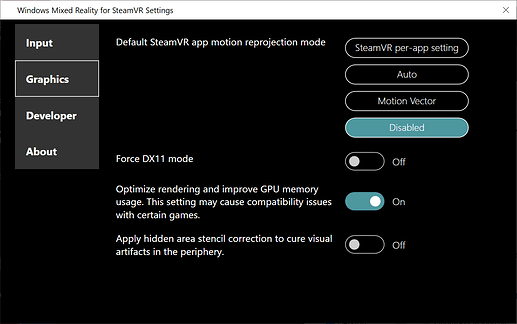 OK, that worked. Went back to beta WMR for SteamVR beta and disabled motion reprojection. That got rid of the stutters. I was using the SteamVR dash to get to WMR settings, but thanks for the link.

Funny, they both show a reprojection ratio.

Well, I was nowhere near as thorough, but for me, out of the box, the update made the sim run more fluid. That’s all I need to know

Funny, they both show a reprojection ratio.

I think for WMR that’s just dropped frames rather than anything reprojection-y.

It’s weird because for a while now I couldn’t run WMR reprojection and DCS without a crash from SteamVR and now this update seems to have given that to a lot of other people (maybe with 2080’s as well?). My hope is that maybe the WMR team will now take a look and sort it out.

I got a crash with DCS today but just once. Since then - OK.

This is not really WMR news, but related 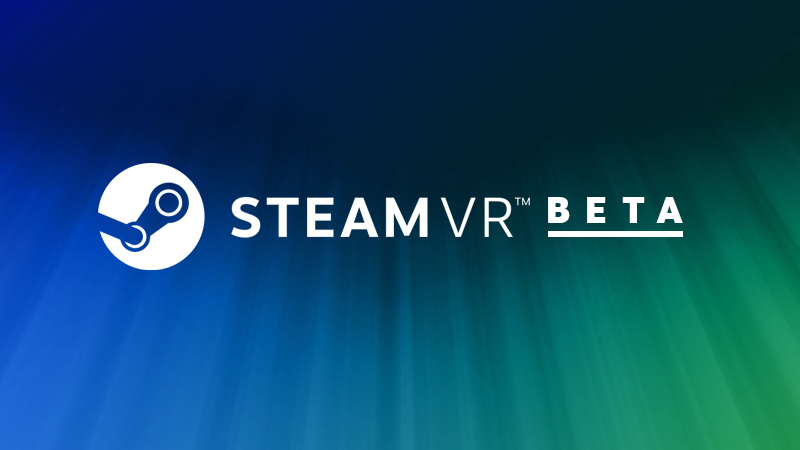 I guess they work with WMR too then? DCS with a different World Scale and FOV values?

– Allows trading off peripheral vision for increased clarity (e.g. reading glasses). This works by using the same total render resolution to draw only a smaller subset of the scene. 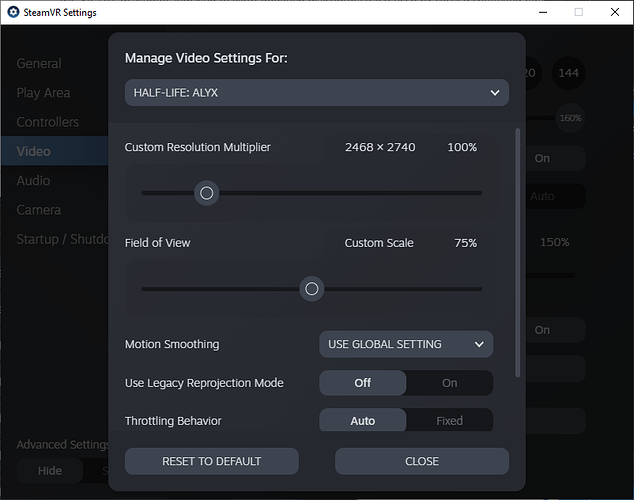 – Enables adjusting the perceived scale of the world (e.g. to get the size of an aircraft cockpit to feel just right, or help short people reach tall places). 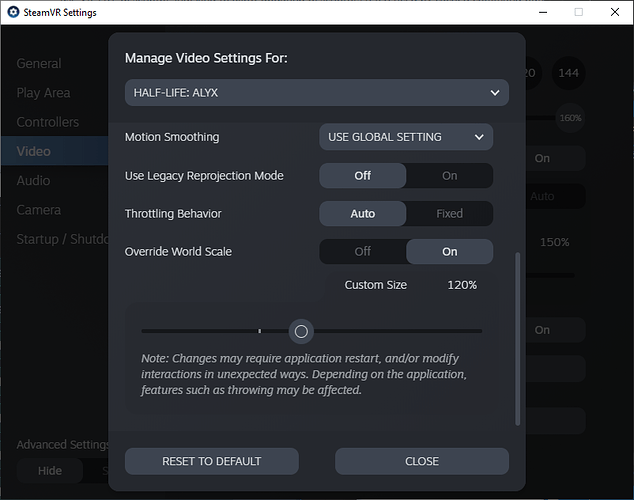 Note: In both cases, applications may cache values related to these features, and therefore may need to be relaunched for new settings to be fully applied properly. WMR headset users will need to opt into the beta version of Windows Mixed Reality for SteamVR.

The world scale in DCS is fun and works. It adjusts on the fly. Setting to 140% turns you into a toddler sat in a fighter jet. Couldn’t really get the FOV thing to work, but probably need to restart DCS to see it - it doesn’t go under 100% so seems like making it narrower isn’t the way to go? Not sure.

My windows update was stuck again…
Had to uninstall WMR portal to get it going again.
Anybody know when we can expect microsoft to fix their apps so they don’t mess with the updating of the OS?

Wow, I had my Oculus Rift S for two years and just sold it a day after I posted it on Kijiji for $300 (Canadian. Posted it for $350). I’m telling you guys … VR headsets really hold value over time. Treat it right and sell it for some good coin to offset your new headset’s cost! I sold my Oculus Rift CV1 for $350 two years ago.

My windows update was stuck again…
Had to uninstall WMR portal to get it going again.
Anybody know when we can expect microsoft to fix their apps so they don’t mess with the updating of the OS?

Windows 10 21H1 update is rolling out as of today

The update I had problems with was the Feature update to 20H2.
It started with WMR portal not launching. Stuck at loading. Went to see if I had some pending updates and noticed the windows update was stuck at 10%.
Tried the fix where you don’t have to uninstall WMR portal, but that didn’t help. Uninstalled WMR, updated windows and reinstalled WMR. Works just fine again.

It could’ve been @fearlessfrog that used his frog sense to see that I was in trouble and used the force to fix it.
That actually makes just as much sense to me as any other explanation.