With all the Nvidia/AMD stuff I'm going through 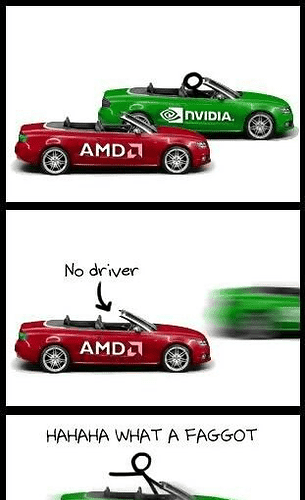 I stick to Nvidia nowadays.
I used to be an AMD follower until… I don’t know, around 2003 or so, then I got sick of the problems with the drivers. Been happy since then.

I am curious how that will develop in the future.

Considering that most of the games now will be developed on AMD cards (because they got the console contract) and that Nvidia is backing out of the gaming market. It might be a good idea to actually look at performance test next your time your in the market for a new GPU.

Only had Nvidia and never looking back.

I’ve been with the Green camp for quite a few years now as they definitely seem to work best in my favourite sims, good to have team Red still on the go though to keep some sort of semblance of keen pricing I guess (still paid over £800 for my Titan X last year though) and perhaps it is time for AMD to bounce back? One things for sure if we only had one player we’d be paying more than we are now.

Recent Nvidia drivers have been problematic for me and for the first time in years I do not automatically install their latest ones and even now am sticking to two or three versions behind because so much got broke with older games/sims with Nvidia’s efforts to support newer games I dont play … could be wrong about the reason things are broke for me but thats my experience on three fast PC’s and high end Nvidia cards using Win 7 and Win 10.

Perhaps with Dovetails new simulations the need for Nvidia wont be so important, having said that I’m going to have FSX and P3D on my drives for quite a few years yet I reckon.

Im a fan of both. Purely for the goold old capitalism reasons. Competition will drive technology forward and prices down. My last two processors have been an Phenom II X6 1100T and currently an FX8350. My last two GPU’s where a HD6990 and now a R9 290. I have not been discontent and had not a single issue with drivers or anything. Although I’ll have to admit AMD seems to have a rough patch the last few years. I was happy to replace the GT230 that preceded it wich has been nothing but trouble (including a warranty claim, 4 weeks without a GPU…).