And actually I don’t want either. But I need something for a short story I am writing. (Don’t ask–I’m bored). The Husky fits the job nicely. I would prefer the C. However, at both the x-plane store and the STMA website, the -A is listed as having a “HangarOps” plugin which allows easy movement of the plane–which I would like for screenshots. Neither site lists that feature for the -C.

(What I really wanted was a 185 amphib but I can’t find a good one.) Thanks for the assist.

I’ll say no…but with the caveat that I love the Husky. It depends on what you are looking for though. The STMA planes aren’t quite as visually polished as say Carenado type planes…but they perform very nicely. They tend to use lower resolution panels and some default instrumentation blended with their own stuff.

So - if you are OK with some of those point deductions for visual enhancements. I also prefer the analog panel of the A-1A Husky over the A-1C’s glass panel.

I do love the plane. And love the bush flying I’ve done with it. I’d say pick it up on sale…but at $24.95 you might not feel the price matches your expectations. At $18 or less though…yeah…I like it.

Also…a shout-out to STMA because they DO really keep up with their planes, constantly updating them through a very slick auto-updater utility. They are really great with customer service and responsive…so from that standpoint…I do like to recommend them.

I knew I could depend on you! I will probably get the -A for $30, taxi it around, get some screenshots, and never fly it again. I am all helicopters, all the time in X-Plane.

I’m probably too late to comment, but the novel haunting the dusty bookshelves of my mind has a well worn amphibious Beaver being driven by a 70 - something ex Vietnam fighter jock, now a freight dog based at Wrangell. Of course, he is estranged from his family and understood only by his old crew chief who, as fate would have it, wrenches for the FBO at Stewart BC, and married to a native american. Beavers tell stories. 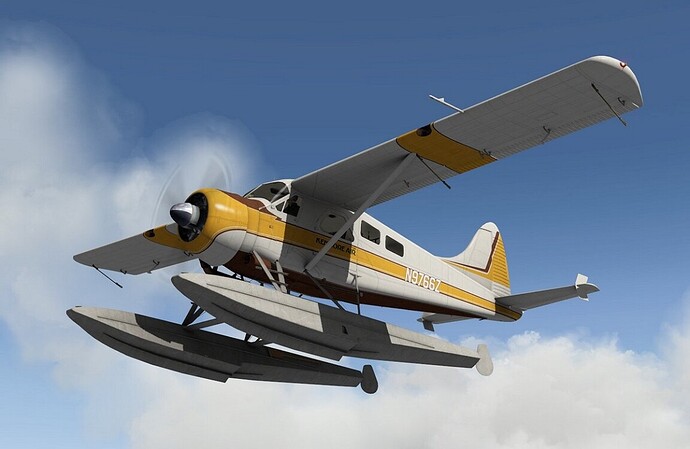 I like the Beaver. But it is a little too much airplane for the beautiful ex-cyclist who becomes the love-interest in my story. Not too much for her to handle, just too much cost-wise to own and maintain. Also, she is an American staying in Canada. I thought the irony would be a bit contrived.

Ah, of course. The Husky makes for a much better narrative in that situation. Agree with @BeachAV8R that the A1A would be preferable.

BTW @chipwich, did you really mean “Native American”? Don’t get me wrong, your crew chief can marry whomever he wishes. If he dragged her north from here, the description makes sense.

I meant the description to refer to an indigenous North American, and it was she whom dragged him, since he was from Lakeland, FL

Thanks for the advice on getting the A1A. As it turns out, in order to get the shot I wanted with the plane parked nicely at the dock, I had to edit the scenery. It just isn’t possible to water taxi with the required precision. Luckily, OpenSceneryX just happens to have a yellow static Husky that is exactly the same livery as the STMA A1A. I had no idea that doing this would be required. Nor did I have any idea that I would need the A1A in order for the shots to match. You guys saved me!

You were also spot on about the model itself. It flies convincingly. But the 3D interior model is weak. The instrumentation is so flat that it is a bit off-putting in VR. Otherwise it served its purpose well. Thanks!