Well that is my story for the day! I do have other lenses on my wish-list, but they will have to wait for the hobby budget to be refilled sometime later. I still need to catch the A380 coming in to land - those flights are daily, but I can only really go out on the weekend - and it arrives around 8:30AM.

If you don’t mind the added weight and size I can wholeheartedly recommend the adapter, you can get some great EF lenses for comparatively little money and they work fantastic on the new mirrorless bodies.

You’re going to have to unabbreviate that for me!

Ah I am caught as a tech enthusiast I want the new shiny model with all the new features!

Hence the R10 - I also looked at the RP (same price bracket) but the R10 is newer and more capable (despite being APSC, which it turns out can be an advantage when you need zoom!).

I’ll start another thread later to discuss and debate lens choices, it is a worthy topic itself.

You’re going to have to unabbreviate that for me!

American’s tail design is nice but they are otherwise plain.

I do like the Rouge scheme and one of Flairs (see that night photo in post 1). Westjet is good too.

Even so, most now are just white with accented tails & wingtips. Only Southwest wants to pay for a full paint job it seems.

Although I have seen some US carriers with the really old basic strips job, kinda like United’s 737s.

And they purposefully make it so you can’t get close to having it all without buying all the different lenses. Did I mention I still have to buy filters? And a telescope T-mount? And a full frame body at some point? And some speedlites? And a lightbox?

I feel you. The R10 is a much more capable camera than the EOS RP, it’s a good choice. I have accumulated a lot of gear over the years… A full set of studio flashes, keylights, a speedlite to trigger my flashes and then later a remote, a pretty nice lightweight carbon fibre tripod in addition to my banged up aluminium one, about 10 batteries etc …

A separate thread about camera gear is probably a good idea

I plan on picking up an RF100-500mm F4.5-7.1L IS USM next week and of course I need to take it birding immediately. There are lots of geese and, if I’m lucky, eurasian cranes in the Rhine meadows this time of year. There’s also supposedly a pair of sea eagles living in a nature reserve nearby

A separate thread about camera gear is probably a good idea

And so it is done!

Started to prevent a total derail in my CYYZ Aviation Photos thread - this will start off with myself and @Derbysieger talking about Canon lenses and whatever tangents that may bring. Feel free to chime in, ask about or otherwise discuss other brands of kit such as Sony & Nikon as well! To get right to it, @Derbysieger - I have my lens wish list but wonder what your thoughts are. I’ll throw my kit in a details-tag dropdown for reference. Sticking to mirrorless RF lens discussion for the momen…

I arrived behind the fence of the start of Runway 24L just in time to finally catch the A380 landing, however I had less than a minute to grab the camera and the radio and get ready to take the shot. It did not help that we had a few inches of snow the night before which delayed me getting out of the driveway by a few minutes - but that was really nothing compared to it being -5°C outside with winds of about 20kts gusting up to 30kts. Windchill puts that at feeling like -14/-15°C! Frosty!

I was having a bit of trouble getting the camera to focus, and I think that was honestly that my fingers were freezing, and I was too lost in the moment to notice. So nothing stellar here, but it’s an A380 damnit - we’ll enjoy it anyway. 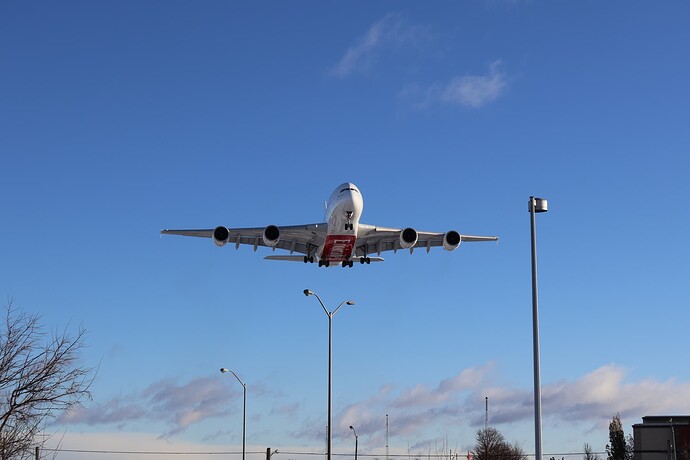 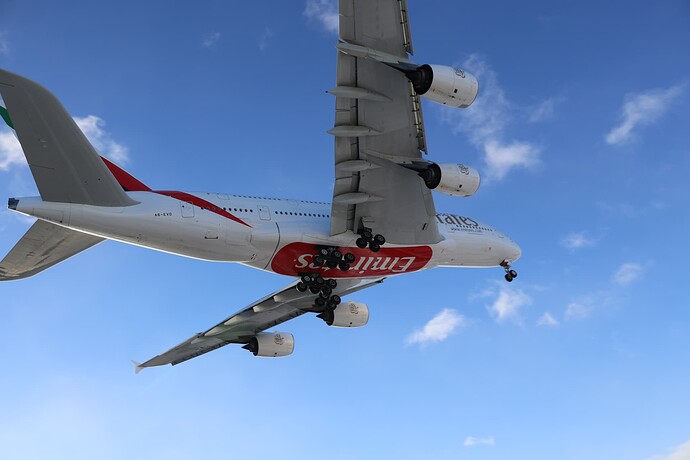 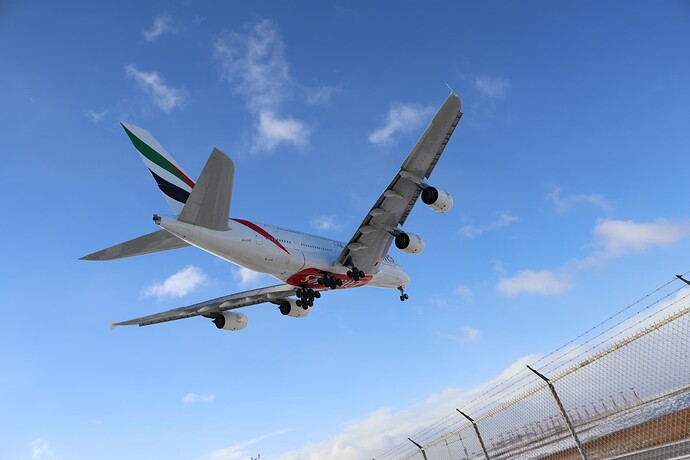 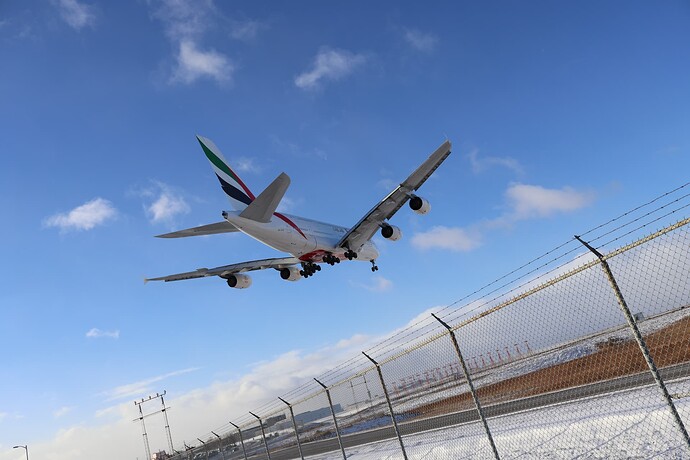 Nice pictures considering the lighting conditions. Do you have your back button focus setup properly? If not we can go over the settings if you like. It’s essential to quickly get your focus to where you want.

I have some cycling gloves that work with touchscreens, highly recommended

get your focus to where you want

How‘s the procedure for shooting something with constant movement like a plane? With back button focus enabled.

Is it like this: Switch to AI Servo (in Canon terminology) and hold down the back button to permanently track the plane, then pull the trigger and release both buttons?

Is it like this: Switch to AI Servo (in Canon terminology) and hold down the back button to permanently track the plane, then pull the trigger and release both buttons?

Kinda, yeah. I have two buttons setup for this. The AF-ON button and the asterisk button (*). When I press the AF-ON Button it switches to subject tracking with eye auto focus and it starts tracking immediately. The *-button simply activates the AF using the AF mode that I am currently in and focuses to whereever I have my focus point or area set (this is also set to Servo AF, Canons AF is so good that I don’t ever feel the need to use anything else). The half press on the shutter release only starts metering, it does not activate the autofocus. In either case AF is always tracking as long as I press the button.

When using autofocus, 90% of the time I use subject tracking with eye AF, the *-button really is only for pre-focusing and for situations where it fails or to get the AF back to my subject when it loses tracking and gets stuck on the background which can sometimes happen.

For landscapes and macro photography I use either manual focus or I use the touchscreen and then switch to MF on my lens to lock it in (it will focus wherever you touch the screen).

Do you have your back button focus setup properly?

That I am not sure! Throw the setup guide in the other thread.

Recalling now, the last thing I had shot before jumping out of the car for the A380 was static, so I probably has also forgotten to switch off one-shot and back to servo, the motion between shutter attempts would be too much to keep up considering how close I was to the plane (relative speed within FOV).

Previously airport trips, I had been using servo along with the one-point or spot focus, as the planes were always near-center frame - or that is how I would start, and then since I was in servo - I could offset the subject to one side and still be in focus anyway.

This helped with photos for Runway 23 takeoffs, as I would have transport trucks pass fully in front of the lens, so allowing area autofocus it would try to grab the truck. whereas in spot, it ignored it as the relative speed was probably too high - and continued focusing the plane once it passed with little to no disturbance.

Funky. The stuff you can do with a modern AF is amazing. Seems that‘s where the last 10 years of camera development went into, mostly. Thanks for the writeup!

Definitely. AF on mirrorless cameras is crazy good nowadays. It barely misses, even when your subject is moving erratically.
I have a quick setup guide here:

A quick back button auto focus setup guide up for @Wes I don’t have the same camera but the process and menus should be very close. We’ll start by setting up your default AF settings. Go into your menu and select the AF menu. The first tab should look something like this: [PXL_20221123_144443422.MP] Set AF operation to SERVO AF. You shouldn’t really need ONE SHOT AF - in situations where I could use it I always end up using manual focus. AF method should be set to your preferred method. S…

It should give you an idea how much you can customize the settings on modern cameras.