As I’m rambling on, Are there any questions or requests?

As I’m rambling on, Are there any questions or requests?

Thanks for sharing - it’s very interesting!

Can you relate your experiences to any flight sims? Falcon 4.0, DCSWorld, etc.? e.g., how realistic is the aerial refueling process inthese sims? What’s done right? What could be done better?

I’ve done A/R in DCS World using A-10 and it seems most of terminology is correct. But right now I can’t relate since I’ve only done paint parallel and in-route while DCS simulates RV-Alpha only.
What can be done to make it better? …a lot. I’ll try to talk about it little bit later.

How is the airspeed/altitude set for a refueling? Based on aircrafttype? Frag? Refueling pilot request?

US and its allies got together and created a refueling guidance so that everyone is on the same page. In that document (ATP-56B…goggalable) it describes most of refueling procedures which include airspeed and types of rendezvous. So when CONUS mission dictate that receiver needs fuel, they select most conveniently aligned track. Here’s what google found for tanker tracks over US. https://airrefuelingarchive.files.wordpress.com/2009/05/air-refueling-tracks.jpg Each track is defined by another document that has waypoints, altitudes, frequencies and such.

Can you share some terminology with us? “Cold nose”, for example, refers to an aircraft turning off their radar, a requirement before tanking, I believe.

You could page thought https://fas.org/irp/doddir/army/fm1-02-1.pdf

I’m playing with C-17s right now and I can’t think of any brevity words with those aircraft.

On a normal training profile, you taking off to a refueling track where you meet a C-17. There you practice A/R with autopilot on and off. Usually 5 minutes on / 5 minutes off. Then you do some emergency separations and then breakup and do landings. C-17 has 2 student pilots and a student load-master plus instructors for both. 135 will have 2 student pilots and student boom with their own instructors. Each pilot usually needs 5 on and 5 off. So training missions are busy and there isn’t much lull of nothingness since instructors will always find something to do.

What a great thread. Thanks for sharing you experience.

Love reading these posts! As to the heat, a childhood friend of mine is a boom operator- she told me about how her crew used to keep their plane at altitude as long as possible when returning to Al Udeid, as a “cold sink,” then descend as rapidly as possible, and try to get on the ground before the temperatures got too unbearable.

But then, she might have mentioned something about maybe having her flight suit tied around her waist while refueling customers over the Gulf as well…

Gentlemen, I apologize but another school is taking up my time now. So unless there are questions, there isn’t much of an update.

On my first attempt to a checkride, we never took of the ground. During taxi to a runway, someone smelled fumes in the aircraft and we had to ground evacuate. It was an interesting experience.

Second attempt to a checkride went well. We refueled few F-15s and spend a bunch of time with B-52. It was fun.

Any root cause on the fumes? Somebody’s leftover animal-style In and Out?

What’s that you are holding in your hand - the foil thing? Is that one of those escape bags/masks? You ever get those fumes coming in the cockpit/cabin when you flew the Beechjet (Jayhawk) and were taxiing with the quartering tailwind and popped the buckets? LOL…that’s always nauseating… 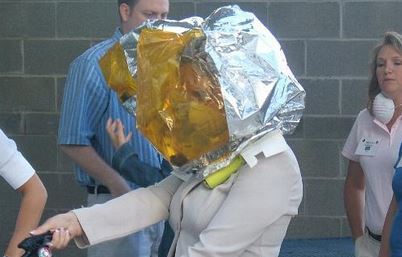 Any root cause on the fumes? Somebody’s leftover animal-style In and Out?

MX guessed it was from APU that didn’t shutdown quite correctly. After fire department and maintainers inspected our aircraft, we went back to take our bags, my eyes got watery from fumes.

What’s that you are holding in your hand - the foil thing? Is that one of those escape bags/masks?

Yep. We had more people on aircraft then availability of quick-don oxygen masks.

We had more people on aircraft then availability of quick-don oxygen masks.

“But it’s an unsinkable ship!”

And finally a video - Not mine, but impressive. Enjoy

I think this is something that most flight simmers don’t appreciate. In the comfort of our home cockpits, we typically strap in a few minutes before takeoff, just long enough to start up TrackIR and our flight program of choice, whereas the amount of prep time in real aircraft is enormous.

For experienced combat pilots, flying the real F-16 is 99% boredom and 1% adrenaline. If Falcon 4.0 had the same ratio, nobody would buy the game.

And we can consider F4.0 as a hardcore sim with all the non-combat things to do in cockpit.

btw GREAT! thread simfreak, I am reserving some long winter nights to go through it all

If Falcon 4.0 had the same ratio, nobody would buy the game.

*If Falcon 4.0 had the same ratio, EinsteinEP would buy the game.
FTFY

And I’m sure I wouldn’t be the only one. But I recognize that many game developers try to focus on the largest market - the biggest bang for the buck, so to speak. Failure to understand return on investment is failure to understand business. This is why study sims and teams that go that extra mile to make obscure details like manual fuel management and override systems available to the virtual pilot that much more rare and valuable.

simfreak, I’m a fellow AF aviator. I stumbled across this forum, please PM me if that is an option on this site.

You can PM him by clicking on his icon. An option to PM should pop up.