I believe the E bracket is an on-speed indication, very similar to the AOA indexer. The bracket sinks when you’re slow and rises when you’re fast.

This is how I use it. But basically, I don’t get too focused on one indicator. They sort of all work together to give an idea of being on speed and GS. Seem to have finally gotten a handle on it, but you know, like golf, that’s the last thing that you should tell yourself.

That is a simplification of course. Angle of attack is the difference between flight path and the wing cord. The waterline and the cord may not be exactly parallel—but they are close enough.

O.K. But I’m talking about the pilot visually coupling the FPM with AOA [as represented by the E-bracket] for an on-speed, on-glide slope touch down. Maybe I’m wrong, but it has worked for me for years and it’s working very well in the DCS hornet. Different pilots have different methods. Do what you like.

So, yes the FPM is ALWAYS coupled with the AOA, but, by itself, it’s not telling you anything about being ON-SPEED.

10 Minutes of me doing patterns around the boat, a couple of good ones, several not so good ones, but again decent for watching what I’m doing with my controls (I remembered to turn the controls indicator on the entire time this time

First off on the initial flyover. During my turn, I’m at idle power, as soon as I see below 250 knots, its gear down, half flaps, wait a second, full flaps. I roll out at the 180 (in this case heading 120) and as soon as my airspeed hits 150 I am pushing my throttle back up to catch the descent and trimming.

Watch the trim indicator on the flight controls indicator (little dash on the pitch axis). It starts at 0 (centered under the stick position) and as I’m trimming it it goes to about 1/3 the way down. After that I am then modulating my power to catch 600 feet and checking my position relative to the boat. From there on in its per previous posts.

Other notes any time I see red on the ball, that’s bad, any time the ball disappears completely that’s also bad.
On all of my go arounds I only ever select mil power, and I don’t touch the stick for pitch. Its trimmed to on speed so it will immediately start climbing as I leave the deck.

Goblin, I am not saying you are in any way wrong. I will never, ever fly a pointy jet. And therefore I will never know anything about how they really operate. But I do presume to know that these tools should be intuitive. If the bracket jumped up and down with the bird it would cease being a useful tool and instead become a confusing one. A skilled player like yourself is still able to get the information he needs to nail the trap despite all the unneeded movement. If the presentation is correct then I am once again being a troll. I will stop now and return to: “Great Jet. Love it! Thank you ED. Keep the improvements coming!”

Not trolling if your intention isn’t to be annoying. Please go on, we are here for discussion after all.

Sorry guys. Mea Culpa. I watched @klarsnow’s video and get it. I was 100% mistaken. Time to get off the phone and take a run through beautiful Boston! Cya!

Yeah…this is all a very interesting discussion on how different people use the different tools. As the planes I fly in real life don’t have HUDs, I’m a slave to the physical (hardware) AOA indexer because it is what I use so often in the real world.

Yeah, sorry about that. I think I was getting a little snippy there. I’m not very good at forum discussions, which is why I don’t really post that much until something gets me pretty excited like the release of the Hornet.

Definitely enjoying the discussion and the Hornet though!

Nice video. You have the approach a bit more shallow than I do it, and your sink rates on the last part of the final are a bit higher than mine but it sure looks more stable that way. I will try that soon!

@Goblin. You were less snippy than you should have been given my centainty in the face of evidence. Plus I was beginning to assume the tone of schooling you. So all’s good.

Anyway, I am KlearNow thanks to @klarsnow. (See what I did there! No? You missed it? Here, let me explain…)

So @near_blind turned me onto this but if you check out this
http://www.aerosoft2.de/downloads/f-14/F-14-X-Manual-Vol1-7-Engl.zip
You can get the Aerosoft F-14X manuals.
The key part is in Vol 7 carrier operations the first 15 or so pages are brilliant. They explain the FLOLS and have this little Gem of advice 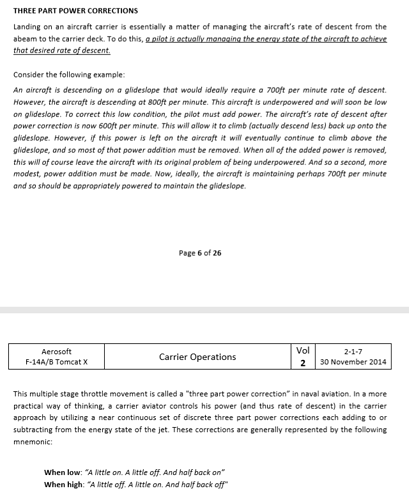 Can confirm after reading that, digesting it for a few minutes, then going in and practicing my patterns…

Three wires with consistency and being far more in control

Keys to success right there…

Apparently real pilots are forbidden to use “deck spotting” technique (using your velocity vector as a reference in relation to the carrier deck). Your scan should only include AOA (on speed), ball (on glideslope) and lineup.(on centreline). That’s all.

Why the deck spotting is bad you ask? Well, if you get used to that, what will you do when your HUD goes out?

My method for landing is after getting into the grove I should already be trimmed on-speed - watermark at around 5°, velocity vector at optimal AoA 8.1° should be around 3° below the horizon - perfect attitude for catching a wire. Now I observe the ball and make corrections with throttle alone. I use the stick only for lineup corrections. You shouldn’t raise/dip your nose at all.

Edit: I had perfect approaches up to in-close, and then trying to correct last deviations with verical stick movement I completely spoiled that perfect attitude for catching a wire. Even when I hit the deck between 1st and 4th wire I didn’t catch any, resulting in many bolters.

Why the deck spotting is bad you ask? Well, if you get used to that, what will you do when your HUD goes out?

There’s a great chapter in the book Feet Wet by Paul Gilchrist where one of his buddies explains his wiz bang technique for always trapping no matter what. His buddy is deck spotting. That chapter ends with a graphic depiction of his buddy flying an F-8 into the ramp of the carrier and the aftermath.

cool cats use the meatball

Can confirm after reading that, digesting it for a few minutes, then going in and practicing my patterns…

It sort of reminds me a bit of the Huey collective, in that the ‘up over, half down’ is how I sort of pulse that guy. Time in helos really seems to help the fine throttle control, at least in DCS.

I actually love the CASE 1 mini-game

and spend a lot of time playing around with it. I’m getting to the state where I’m never really in any danger of the spud locker but more just trying to nail it. It’s actually a bit addictive.

The ability to just being able to jump into to DCS, load up the mission and then do some circuits helps as well. I get put off when I think ‘I need to plan to sit here for 1 hour’, so having something smaller and focused to do is great, and really making me enjoying jumping back into DCS again.

Not sure if anyone has said it in the last 15 minutes or not, but good job ED - this is great fun.

Keys to success right there…

I like this and I am looking forward to using it in my landings. Thanks @klarsnow and @near_blind . This makes sense to me in that it assumes that the pilot will over-correct when given the indication that hes is too low or too high, which of course I am over-correcting.

My struggle is always to stop chasing it. This mnemonic builds in an immediate correction to my over-correction. I have the same problem with close formation work and refueling. Anything to remind me to stop being complacent with the throttle is good.

I spent two hours doing case I again.
I am also enjoying it and getting a lot better now.
Still following the TVV though since the ball is just too small for me and zooming in somehow destroys my feel for the airplane.

I also made my own mission for training because the static planes in the instant action mission seem to cause stutter.