I’m not sure if the actions of your flight have any strategic influence, but as a mission generator it’s quite ok.

In EECH you could go full on flight-of-the-comanche and sneak up to the factory building in the rear. Stopping the production of planes, choppers and tanks would end the war pretty quickly! No such gameplay in il2.

Oddly, it would make a lot more sense in Il-2 to disrupt production than EECH! Bomb a fighter factory in the 21st century and it would take months to see a difference.

That said, it’s hardly realistic to expect one pilot to make that much of a difference. I did enjoy SWOTL’s old strategic campaign, though! You could choose to go after the airfields more, or the ball bearing factories, or oil refineries, etc, and it would influence the kind of resistance you’d face, too.

Don’t forget that there are a ton of great scripted campaigns (which are all real cheap during sales like this) that are far more immersive than the random career missions, they just don’t let you fly any old plane you want.

Anyone else out there wish that Il-2 would implement pilot bodies in the cockpit? I know there’s a mod out there, but I feel like this is a no-brainer since the cockpits aren’t clickable and they’re spending all this time on period and seasons specific pilot models.

It’s the middle of Autumn already and the work on the project progresses well. For instance, the AI-controlled transport plane C-47A Skytrain (Dakota) for Battle of Normandy is almost ready and you’ll get it in the next update. This WWII veteran served in air forces and civilian air fleets of many countries for several decades - one of the iconic symbols of the piston era of aviation. These aircraft played a tremendous role in the Battle of Normandy, dropping paratroopers, supplies and towing assault gliders. This legend will be finally reconstructed in our project, even if it is an AI only aircraft for now. Later on, when we complete another stage of the Career mode improvements, it will be used in this mode for transporting cargo loads, airdropping paratroopers and parachute supply containers for the troops on the front-lines. At the moment the new paratrooper model and its integration in the Career mode are not yet ready for Early Access, so this aircraft will be available in QMB and community-created custom missions as an ally or enemy loaded with cargo or parachute supply containers.

The second hero of the day is the upcoming Collector Plane - the British Hawker Hurricane Mk.II fighter. This legendary early war aircraft saw much action in the Battle of Britain and later on the Eastern Front with the Red Army Air Force via the lend-lease program. This fighter actively participated in the Battle of Moscow and Battle of Stalingrad and the owners of this Collector Plane will be able to use it in the Battle of Moscow and Battle of Stalingrad careers in the coming update. There were many different modifications of this plane, the most interesting ones will be available in our sim:

The work on Tank Crew is continuing as well. The coming update will include very important changes for ground vehicle AI, both detailed and simpler modeled vehicles, making the AI gunner actions more realistic. To hit a target at a distance, they will usually bracket a target with gunfire as they find the proper range. Spotting a target to the side of the current aiming line will require more time the more distant it is. Both of these actions will depend on the AI proficiency level set in the mission. The AI gunner will also behave more naturally when the target is destroyed or no longer visible - it won’t rotate the turret to the default position immediately, but will wait for some time, looking for more targets in the same general direction. Many smaller improvements and changes will be added as well, as we prepare Tank Crew for its official release. 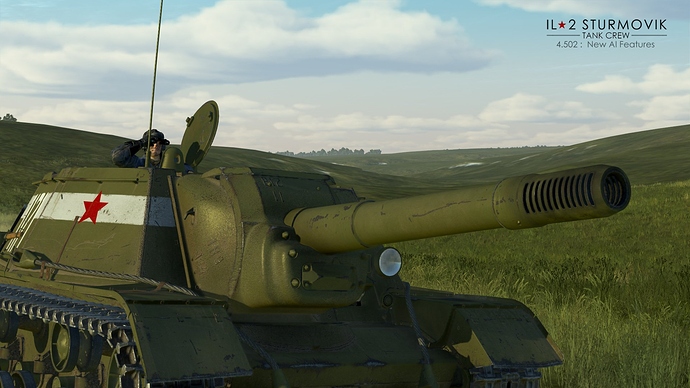 Vid of the upcoming Hurricane

oh man, look at the effect the IIc has on those eyeties! cyka BLyAT!

Oh I like the hurri a lot, stupid jerries wanted to tangle, well I gave them what for!

The hispanos are far better than the peashooters, I managed to run the .303’s dry in the process of a 3rd machi kill, but with the 20mms I felt like I could have kept busting their tails off for hours lol.

The birdcage canopy is very comfortable in VR. If I let people have their first go on my rig, I must remember to put them in a hurricane. I also like the fact that I can see down the nose a couple degrees more than in the spitfire, allowing more accurate deflection shooting.

So how do you guys like the new pilot G physics simulation? It takes some getting used to, but I think I like it overall.

Thanks for sharing. I gotta try this. It was a long wait.

While I appreciate the historic significance of the much beloved Hurri and look forward to flying it, repeated climbing to meet 109s is not exactly my cuppa, if you know what I mean.

So start above them then!

This isn’t the BoB, that’s CloD that has that scenario…

Right you are JM. Regardless of the theater or campaign, I prefer an energy fighter over a turn fighter. and the Hurri is most definitely a turn fighter. Those who flew it well and survived were either masters of their craft or lucky. In the Great Battles scenarios, the Mk II will be up against some pretty deadly foes, IMHO. In other words, which model 109, F or G is at a disadvantage to the Hurricane? FW-190 A4 perhaps? Not feeling warm and fuzzy about the proposition.

This isn’t the BoB, that’s CloD that has that scenario

Yeah… I wish they would re-make BoB in the Great Battles franchise.

With CloD’s support continuing with Tobruk, I don’t see that happening. Duplication of effort with limited resources and all that…

The Hurri is in the career for BoS and BoM. So it should be historically appropriate against the birds in those periods.
Whether it is superior to any of the Axis birds in those theaters is a different story, and the real pilots rarely got to choose who they fought against.

With the upcoming BON map you can experience the BOB scenario over the channel.

I don’t see that happening

Doesn’t stop me from wishing though.

A post was merged into an existing topic: IL-2 Great Battles updates 2020