Man…having a very difficult time with BFT-07 - Aerobatics. I’m just horrible at them in the A-10C…too sloppy to get a passing grade. Reverted to the practice mission twice after failing the graded mission…and still no luck…

I don’t want to pick on you but the guy in the video does not seem to use TrackIR. Heck he doesn’t even use snap views.

I don’t want to pick on you but the guy in the video does not seem to use TrackIR. Heck he doesn’t even use snap views.

I have the same vision problem that “Wash Out” has…

It’s OK though. Up before the sun. Mudspike coffee mug brimming with Costa Rican misty mountain brew. Sitting down on my desk with a kneeboard strapped to my leg, my Vibram Five Fingers shoes to provide that extra rudder authority, and some Nomex flight gloves. I’m going to play a little Kenny Loggins “Danger Zone” quietly in the background, and aim the fan at my face. 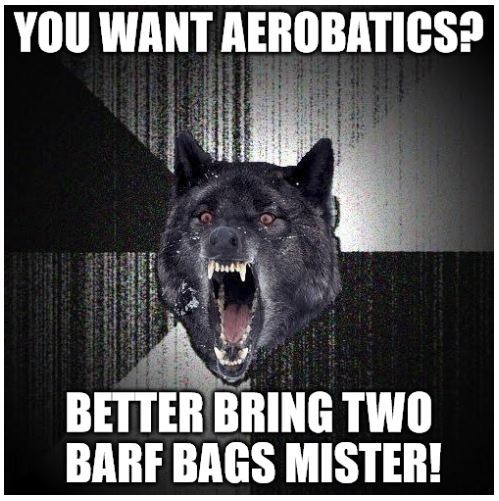 You can do it. I wouldn’t have passed the first mission of the campaign.

You cannot fail with support by Kenny.

I have flown #07 and Speed is the Key. Hope that helps.

Yes, I’m finding at that top of my vertical maneuvers my controls are getting too sloppy…so my heading tends to drift. Thanks for the tip!

Failed this about three more times. This morning, I put on my Rift and flew it - I passed (barely)…but I passed…! VR (or even TrackIR) makes this much easier since you can crane your neck, find your smoke trail that you left at the beginning of the maneuver, and make small adjustments to get back on the proper rollout heading. Damn…I think I flew this mission about 8 or 9 times all total…!

Qualified Minus - but qualified!

So this was a bear of a mission for me. I flew it around eight times in various forms. Maple Flag Missions is kind enough to provide a “practice” mission for each campaign (graded) mission, which I had to avail myself of several times to practice for the checkride for this mission. The practice mission lets you skip the startup and puts you in the air closer to where the maneuvers will be performed. I failed the practice mission maneuvers many times as well…but finally squeaked together just enough passing maneuvers to pass the exam.

My biggest problem is that I’ve disconnected my TrackIR and was stubbornly refusing to fire up my Rift because I wanted to capture the maneuvers full screen for the AARs. Well, this morning I finally broke down and used the Rift and it gives waaaay better spatial awareness. The ability to find your smoke trail and find points of reference on the ground make the maneuvers far easier to complete without getting off track.

The mission starts with the typical full start-up, flight to the MOA and then some clearing turns and G warm-up maneuvers.

From there, the lineup of graded maneuvers includes: Immelman, Split-S, Loop, Barrel Roll, and Cloverleaf. From what I can tell, 3 out of 5 will get you a Qualified Minus rating (just enough to pass). I managed to mangle all these maneuvers many, many times. It was frustrating…

A near mid-air collision after one maneuver in the box…

Finally, in VR, I was able to get the three out of five to pass with a Qualified Minus rating…

Today we are going to attempt to handle some emergencies that get thrown at us. Fortunately, I was able to use the BFT-08 practice mission to go through the procedures and commit them to psuedo-memory. We will head out to the MOA and have our checklist in hand for the half a dozen or so emergency procedures we will encounter of various levels of seriousness.

Off we go to the MOA…

The emergencies come and they are generally fairly easy to handle (particularly if you just finished the practice mission). It is an interesting look at how the loss of some A-10 systems affect other systems in the aircraft (and how the loss of systems affects mission capability) and it is a pretty good idea to know those details about the airplane you fly.

Again, I commend the campaign designer for the very good use of the airspace, speeds, and headings to keep you in the MOA. Adherence to the instructions is important to keeping you where you need to be and the missions unfold very nicely…

The most difficult procedure (other than a dual engine failure) is the Manual Reversion landing - a delicate affair that requires keeping ahead of the airplane, using small inputs, and recognizing that trim works backwards…

Setting up for a long final under Manual Reversion…

Passed…! I was actually surprised at the Qualified Minus on the maneuvers since I thought I had aced the checklists. I did go ten knots over an assigned airspeed once though - so that might have been the ding…

Next up will be Instrument Approach and Landing…let’s see how this old CFII handles that…!

Well…the most serious emergency is that you are flying a USAF jet, not a Navy aircraft…just say’n…am not right NavyNuc99?

Well…the most serious emergency is that you are flying a USAF jet, not a Navy aircraft…just say’n…am not right NavyNuc99?

I remember one squadron old-timer who told me a story about going to Red Flag with I think a Hornet squadron. He was line shack at the time, and he and his guys had made a casual wager with the AF crew chiefs (Vipers, if I remember right) about who could get their birds in the air the fastest. So of course seeing a Navy flight line, when you’ve got a small platoon of people around each jet, the Air Force guys had a good laugh about all the extra people.

Until they started the jets, and more than one of the Vipers was downed on the line, while the troubleshooters and plane captains were running all over making sure “their” jets were up and running, fixing minor problems, etc. The way he told it, the Navy line had twice as many jets roll out, and faster.

LOL. Yep - Having been in joint commands I have caught a look or too at how the USAF has organized and reorganized their maintenance programs over the years. The Bottom Line - as you well know: When you are on the boat, time and space are of the essence. You have got to launch on time because the event ahead of you IS going to land on time once your event has launched and you have room–literally space on the deck–for maybe one spare aircraft. If it takes a bunch of guys to meet those demands…so be it.

It’s 1987 - I’m the IO for an F-14 squadron. One of our airborne jets experiences control issues and heads back to Nellis. He’s clear for landing RWY 21R.

The second he touches down, the control problem crops up big time, sending the jet “Baja-ing” across the desert field between the runway…it even “jumps” a small ditch.

There is a section of Vipers ready to go on RWY 21L. heir moment to the tower, “Um…what’s that Tomcat doing?”

The Tomcat ends up on the **left**side of 21L (which would have cleared the F-16s to take off if it wasn’t for all the emergency gear headed that way.

The F-14 aircrew did a normal shut down and exited the aircraft. The Tomcat was towed back to the line where it was checked for FOD damage (none found) and the control issue was fixed (bad SAS controller). It was flying the next day.

While this maintenance is happening, the CO of the base pulled up in a nice USAF pickup. Our squadron maintenance officer (MO) and I happened to be standing out by the line looking at the plane. Seeing the CO’s eagles, we figured we should see what he wants.

Me - "Can I help you sir?"
CO - “Is that the plane that ran off the runway?”
(I was thinking, technically it ran off two runways but decided not to correct the Colonel)
Me - "Yes sir"
CO - "When can it fly again?"
MO- "Tomorrow sir."
CO - just kind of shakes his head in amazement
MO - shrugs - "They’re Grumman tanks sir…its landing gear is fine."
CO - drives away without saying a word.

“HAWG-11, I’ve got a phone number for you to call after you land. Advise when ready to copy.”

Hope they don’t fail you for not turning on the lights!

Hope they don’t fail you for not turning on the lights!

Oh - you’ll see me. AFTER I BLOW UP YOUR BARRACKS. YES YOU WILL.

Advise when ready to copy.

I’m a virtual Air Force pilot…I can’t fly and write at the same time. Can I call ground instead?