Well I wish I had waited a few more months to upgrade. The 10th gen Intel chips look like absolute beasts. 10 core 20 thread monster running at 5.4ghz all core (overclocked). Even pc gamer, which IMO tends to lean towards AMD, had to admit that this thing will be the king of gaming. 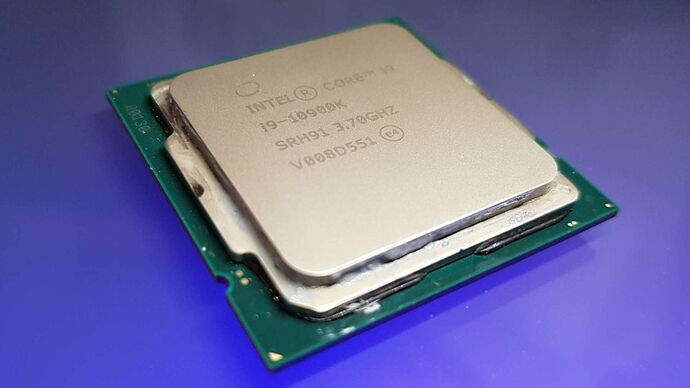 The i9 10900K is the flagship CPU of the Comet Lake lineup and the fastest gaming CPU... but is that enough?

The power consumption when you max the new i9 out was reported at like over 300W with an engineering sample, and it had to be turned down (causing a delay in release) because the VRM’s were by the motherboard manufacturers (which were ready months ahead of the processors) couldn’t handle that.

The pricing for Comet Lake has largely remained the same as the previous Intel generation on a tier-for-tier basis. That means the top Comet Lake chip is the same price as the top Coffee Lake at $488, and the cheapest Core i3 is $122, but as the specs have changed you’re getting a lot more for your money this generation.

I’d like to know where the i9-9900Ks are available for $488 because right now they’re at least $50 over that price. I foresee the same being true for the first 6 months that the 10th gen hits the market.

Showing 250w in that article, thats still a lot. But you start running more cores at those kind of speeds, I guess its expected?

A lot of those guys got eaten by dinosaurs though.

I hear that, my guess is maybe they’re still selling over MSRP

Wow. Seemingly in time for XP11/Vulkan and FS2020/DX12; may see some really gorgeous stuff, or current stuff running REALLY fast. Then the nVidia 30xx series. Arg, why didn’t I stick with Tetris!

And the circle of life continues. Something newer/faster/bigger/smaller/better always around the corner. And flight sims will always crush it.

And flight sims will always crush it.

LOL! Yup. My “awakening” to the, “never enough storage space, memory, or cpu cycles” moment was when they came out with the 80486. Up that point I thought we had ‘enough’ power. Swing and a miss.

EDIT: Wonder how much I can get for a slightly used gallbladder? Or kidney?

And flight sims will always crush it.

ED: “DCS, what is best in life?”
DCS: "To eat the latest computer hardware, see it crushed before you, and listen to the lamentations of ‘wtf my fps sucks with this game!’ "

I think for us this will for sure be the case.
DCS eats up a core like no tomorrow and does it consistently for it’s running duration.

The 10th gen’s TurboBoost3 is thermal / time limited so even if we got a benefit, it wouldn’t be a continuous boost while our demand on for it is.

A couple other notes:

While the base RAM speed bonus up to 2933mhz is nice, it’s not so big that we’d notice. Anyone that cares that much is likely using XMP to run over 3000mhz anyway.

The lack of PCIe4 is a bummer, but like the article says - current GPUs aren’t maxing out PCIe3. If you want it for faster SSDs, you may already have a newish system and can wait for an upgrade.

The built in Wifi6 means Gen9 was the last of the Wifi-Free board era. Wifi6 won’t benefit you unless you have other devices on the network (say another PC and router) with that for LAN transfers, and fibre speed internet (gigabit or more) which most people do not.

I agree with the article that the most interesting portion is not the 10900k, but rather that what was the 9900k is now an i7, and the older gen i7s are now an i3.

These i3s may even be more than viable for DCS, meaning the bar to entry may be much lower now for those on a budget, and perhaps a great time for them to upgrade. Same for those playing other games.

I wish I had waited a few more months to upgrade.

And the circle of life continues. Something newer/faster/bigger/smaller/better always around the corner. And flight sims will always crush it.

Yep, because of this.

That’s why I always ignore PC gaming hardware news for at least a year after getting new hardware, it would drive me insane.

That’s why I always ignore PC gaming hardware news for at least a year after getting new hardware, it would drive me insane.

Before upgrading the HPN server, I wanted to do a 10th gen, but the delays followed by COVID had me jump for a 9th gen system while the stores were still open! Don’t regret that either, 9900k to 10900k won’t be a deal breaker - especially since 9th gen equipment was on sale.

Plus, if for some reason you want to license Windows Server to tinker with - it’s licensed by physical (non HT) core count, the minimum being 8. So buy that 10900k and a homelab server now costs substantial extra $$ for those two cores due to an add-on license pack.

I read a lot of things that the jump from 9 to 10 wouldn’t be all that, so I went ahead and upgraded to a 9700k last month because it had been 4 years and there was a good sale.

Intel must be desparate if they really throw out a 300W TDP atrocity.

The pre-order price is indeed the same as the 9900k’s even if it is higher than what was in that article. Of course the pre-orders are gone already.

Well and don’t forget that new motherboard you will need!

I wonder how long until “general availability” - as in, I don’t need to pre-order or wait for it to be back in stock and panic buy before being sold out immediately again.