2 volunteers need for a wee bit of mission testing. Harrier and Marianas required

Hey guys, @jross and I are working on a mini campaign of Falklands type missions, but based around the Marianas. Since it’s multiplayer, we need to do a small bit of testing launching flights of 4 from carriers. The tricky part for us is that the ships are mods, so there isn’t much definitive info how they will handle flights larger than 2-ship in DCS 2.7. It shouldn’t take long, and there are a few fun mods you will need installed beforehand (all Saved Games). Jross and I are in the eastern US time zone, but can schedule weekend time to accommodate other TZs. We’ve had a blast working on this so far, but there is only so much can do with just 2 of us. No need to be proficient in the Harrier, since we are using heaters and dumb bombs. In a couple of weeks we are going to be building some missions for the Scooter too. If interested, reply here and I’ll add you to a group PM. TIA

Don’t own the Harrier but hit me up for Scooter mission testing when you need it.
I love my A-4E and the Falklands and would buy a Harrier I but the AV-8B N/A that looks like a gaming setup with all the screens doesn’t do it for me.

Also @chipwich & @jross Where does that Super Etendard comes from?!

I’d buy that module on presale the minute it is available.
Realistically that should only happen by the time I am enjoying my pension, if ever.

Sorry for the derail. Falklands mission testing,
who owns the Harrier and wants to help test?

Where does that Super Etendard comes from?!

It’s bundled with the Clemenceau class carrier and uses the MiG-29 pit, which is an excellent fit, IMHO. Normally, I don’t like such conversions, but in this case it works quite well. Someone has made the effort to convert the cockpit labels to English.

And to use the Exocet missile you need this also:

Yeah, to piece this all together requires a few add-ons but, with the exception of the AV8, they’re all free.

We tried to do this without any mods but, well, DCS (being DCS) just isn’t that complete in the content department; just looks ‘weird’ with UH60’s (among others), in US Navy garb, flying around in 1982 behind a UK battle group.

The idea is to zip-up the mods/skins folder(s) into one file and allow access to that. Then you can extract to your Saved Games folder and, hopefully, be on your way[1]

As @chipwich said to me recently - you really find out about all the ‘gaps’ in DCS World when you try to build something beyond a basic mission.

But it sure looks pretty.

[1] I’m kind of new to the DCS multiplayer world and I suspect some mod creator(s) might get wrapped around the axle about this method (why would you put it out there if you didn’t want people to play with it?). The “Readme-like” document has links to all the mods too, so the creator will get their due mention.

So, it may just be an “in house” thing - for Mudspikers only, behind a password, on “special occasions”. To be determined I guess.

Here’s a snippet from the “Readme”:

[See below under “Freeware Assets/Substitutions”]

Handful of missions based on the 1982 Falklands conflict between the U.K. and Argentina, using the Mariana’s map in DCS World. This is not a scripted campaign; you may fly any mission in any order (determined by the server). Our goal is simply to represent specific air combat missions flown by both the UK and Argentina based on research of that conflict (books, internet, documentaries, etc).

The U.K. fight with AV-8NA’s, Argentina will be represented by various free-ware assets as available, the A-4C being significant. Various skin modifications, also free, are used.

Since the assets in DCS are lacking coverage some substitutions are required (see below).

Players will fly and fight in either the AV-8B/NA or A4C.

Difficulty level. We’re going for “Moderate” here. Meaning some ‘cheats’ [sic] are turned off; hot starting is ON; etc. Some very simplified procedures:

The following items would be nice to have help on.

We have the first 4 missions 90% complete. Still working on getting the freeware carrier mods working (or finding a workaround). Then tweaking some things related to MP.

As @jross states above, you need the Rafale Pack to get the Exocet. Also, with regards to the Clemenceau, it is a beautiful model with functioning meatball. It comes with a Veintecinco de Mayo skin, which we had planned to use to launch Skyhawk attacks on the UK carrier group. But it’s resource intensive and the most AI Skyhawks I’ve been able to successfully launch is 2. So, we will probably use the Stennis.

During the conflict, this mission was planned by the Argentine Navy, but never happened because when the A-4E-C is loaded with bombs, flight ops needs 40 kts over the deck. The weather didn’t cooperate, the General Balgrano was sunk, and so the Argentine Navy made most likely the prudent decision of withdrawing their carrier to port. This is detailed in the book, Harrier 809 in the chapter, Midway of the South Atlantic. 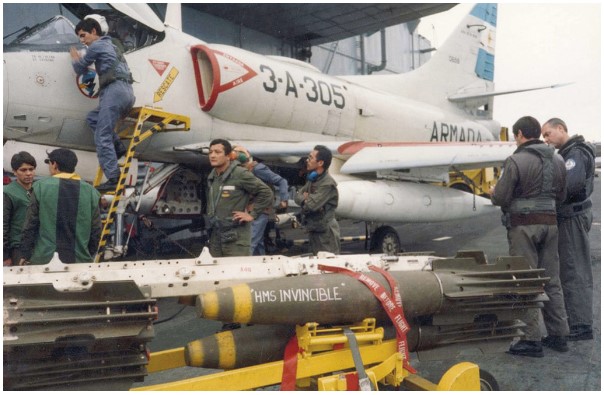 I whipped this up in about 15 minutes. So it’s really rough. Speaks to my complete lack of skills. But it was fun. Pretend it’s 1982…

I’ll keep it up for a few days.