The time is upon us. Best time to buy modules IMO. Only full price modules I’ve ever paid for were the Harrier, Hornet, and Tomcat.

No regrets on other purchases so far, other than not having the time to fly some of them.

Things that are on my watchlist or I’m on the fence about:

I’m surprised to see the recently released I-16 on sale for $30. It isn’t a type that has any real appeal to me, but that is a good price.

First of all, let me thank you for totally ruining my weekend with this announcement. Instead of enjoying fun in the sun and on the water with friends, I’ll be squirreled away in my man cave pouring over the mods on sale…I’m never going to get a tan.

I have both the Gazelle and Hip.

The Hip is great. Lots of missions from sling load to CAS. I really like hauling troops and cargo around. A great flight model and even some “help” from your virtual aircrew. Hip + On Sale = Buy (IMHO)

The Gazelle can be a lot of fun - especially shooting armor with the ATGMs but…
If the flight model is correct I am amazed it was mass produced. I’ve crashed more DCS Gazelles than I have DCS Viggens…it is twitchy. Perhaps in the real world this is more of a “seat of the pants” machine that just doesn’t translate well to a sim. i.e. there is a trick or two that helps getting it into a hover that you probably don’t use in the real world.

Using the ATGMs is really a 2-person job. Yes, once you put it into auto-hover you can jump into the Gunner’s seat and engage targets but a Jester virtual gunner might be better in a more realistic sense.

Things that are on my watchlist or I’m on the fence about:

Normandy and Assets is great value at $30 if you like the WW2 aircraft. Especially so because we now know that the map is going to see further development and optimization.

The Gazelle is a lot of fun, even if there are complaints about the flight model. Personally I enjoyed it. Pretty simple to learn systems wise, and now we have collideable trees, really fun to sneak around with at below treetop height.

The Hip is definitely worth getting. It is excellent in VR… a huge cockpit with more switches, knobs and dials than you can shake a stick at. It is the complete opposite of the Gazelle when it comes to handling. Heavy and powerful.

You forgot the steroids.

Without cargo weighing it down, the Hip is very nimble.

This will keep me occupied for awhile… Still thinking about the I-16. 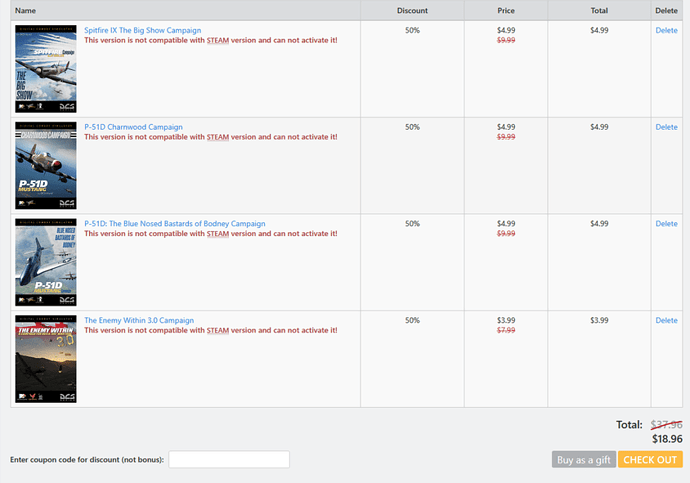 I’ve also heard the gazelle campaign is pretty good. Haven’t ever finished a campaign except for the hornet mini campaign. Mirage one was pretty good, but i lost progress when it went to 2.5 from 1.5. Didn’t feel like starting over. The A10 campaigns look interesting, but the ones that come with the module get boring pretty quick.

Hmm…would it be wrong to pick up the WW2 Assets pack to use the AAA and LST as stand ins for more modern-ish equipment?

Piercing Fury was also great. I’d think a campaign like that one would be right up your alley.

Mirage one was pretty good, but i lost progress when it went to 2.5 from 1.5

We can help you fix that! What you gotta do is head on over to C:\Users\Gunny\Saved Games\DCS (.OpenBeta)\MissionEditor, then find the logbook.lua file that’s in there and then edit the stage and mission name to the mission you should be on.

Only if making general-public MP missions is of concern - all clients must have the pack to join the server if a mission with them is running.

For SP stuff? Go for it!

I love the hip. I’ve just bought the oil fields campaign. The hip, the harrier and the sabre are the things I fly most. I love them to death. I’d recommend the museum relic campaign to anyone. Its fantastic.

I’m currently trying to convince myself I don’t need a mig 21…that I should not buy anymore aircraft till the HIND comes out in a couple of years. That I still need more tomcat time… But I’m so in love with the hip I may need more Russians in my hanger (fast becoming a warehouse)

I bought that in the last sale and can’t wait to find the time to play it.

Having the F/A18 and Spitfire along with the Persian and Normandy (with assets) maps already I added the A-10C, AV-8B and Nevada map in the sale today. This gets them for me sooner than I was planning but its a good sale so hard to resist.

Having the various terrain options is great. Looking at my logs i have spent most time in the Spitfire and have been starting to use the mission editor to create some scenarios.

Love the Hornet and Spitfire and the Warthog and Harrier will be great too going by my few minutes with them today.

I’d really like to buy the NS 430 if it were offered more as a 3D panel option in several of the aircraft.

You may not need it. But I will say, landing the MiG-21 is probably one of my favorite aircraft in DCS World. It has a fantastic dynamic feel to it and always feels like you are on the edge of control. Love that plane. I haven’t flown it in a long, long time though…so I’m not sure how well it has aged.

I have such a long list of wonderful aircraft to learn / master already that I’m making the unexpectedly mature decision to get on with those. Now, if the Hornet or Tomcat we’re 50% off it would be a different story…but I may need to wait a while

haven’t flown it in a long, long time though…so I’m not sure how well it has aged

Am unrelated but very important issue for me in this is that Fairford airshow is next month and they have a mig 21 coming to display… Last year unfortunately the pilot and plane was lost in a horrible accident and obviously couldn’t make it
But I have always wanted to see one fly! I’ve only ever seen static ones.

It would Be very interesting to see what the pilot is up against before I see one in real life… But I have so many planes already! [quote=“BeachAV8R, post:13, topic:8670”]

It looks awesome doesn’t it! I love the idea of civil flight on dcs! This looks right up my street. I love freight hauling. I’m very keen to get stuck into this

Seems daft not to pick up Persian Gulf and updated Enemy within Campaign…bargains at $25 and $4
The only question is…can I resist buying the Harrier too? I’m still learning the A10C so doubtless won’t have the time to fly it…but it IS tempting!