if you are a Ford fan this feed is great.

Great battle atm between Chevy and Ford for P4 in GTE Pro. 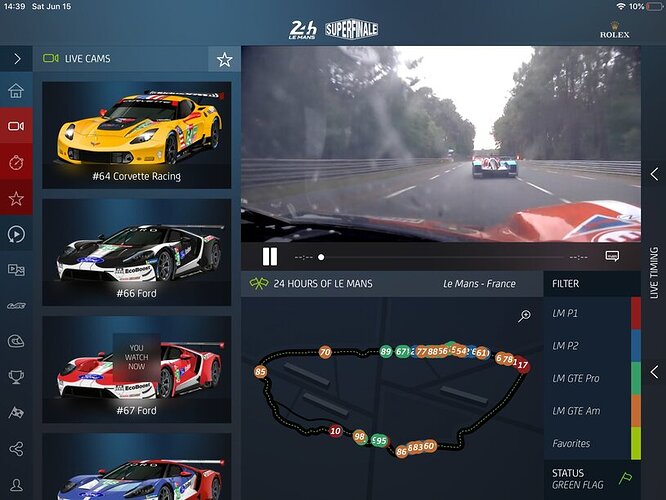 Yeah, but there are so many streams and MotorTrend/EuroSport on cable or Internet TV that it’s not hard to find. The major networks probably find it difficult to justify the effort given the accessibility of the race.

Chuck, can’t you cast that stream up to your TV, Roku, or Apple TV?

Ya, when the wife lets me, lol…

I tried finding a stream of the race, none worked… just in car views from the app.

On Spectrum cable they are showing the race on the Motortrend channel.

I think that it’s fascinating that after almost 12 hours of racing In GTE, P2-P8 are a total of 30 seconds apart.

If it’s any consolation there is zero coverage here in the UK as well. In fact, I didn’t even realise it was race weekend.

I’m Loving the 24hr coverage on Motortrend,I hope they do the same for Daytona 2020

It is 24 hour-long so I’m not sure that any network is going to cover any significant part of it - just not how broadcast networks are set up. That said, and as the above posts clearly show, tis is a racing event that is “custom made” for web-based coverage.

I begrudgingly pay the gods at Google for TV, but it was really great being able to take my iPad around the house working on projects while enjoying the race on Motortrend (Eurosport). At one point I had to run to the Salvation Army to drop off donations and I had the race going in the car, listening more than watching.

Anyway, congratulations to Toyota, Ferrari, and Ford. I believe that I heard that it was the 70th anniversary of Ferrari’s first Le Mans win.