Advice sought for sim cockpit "without" hand assembling it

So since I got in a nasty pile up last year and acquired a mid back fracture in the aftermath I’m looking for a sim cockpit to replace the tacky board horror I’ve been using. I’m tired of my current arrangement which looks like this:

Although the TH8A shifter clamping down my Warthog stick IS an improvement over the G-29 in both feel and location, the old Oculus box from my now donated-on Oculus is probably not the best PC stand, let alone base for the Warthog AND the PC. It just gets the throttles up there where my paws expect them to be so we don’t have top disturb the goggles.

Barring that fact that I’ve largely gone all VR I probably spend more of my simulator time in racing sims than flying, but those are intensifying. I sent back my initial Honeycomb Alpha because I’m waiting on the Beta- THEN it’s on. I’ve got my A2A 172 for P3D/FSX and the 172 in XP is considered good enough for Geim flight instruction. I’m actually thinking “really” dedicated rig for that as I’m also considering at least my Sport Pilot’s license since the regs have come down a bit regards type II diabetes and being PIC- just have to show documented proof from your MD that it’s well regulated over time with oral medications IIRC but I’m sure Chris will pipe up if I’m mistaken.

So the priority would be for an auto cockpit, as I’m pretty sure I’ll want a completely different rig for flight as generally the flight deck is more what the lovely folks at Triumph call the “wide-awake” position. But having said that I can see putting the Warthogs in the Auto simulator cockpit FAR before anything like the Honeycomb products- can you imagine pulling back on a pro level flight yoke from the semi - reclining position? I realize that’s what Yeager did in the X-1 but that’s only ONE airframe, and one that isn’t even available- only the X-1A and B, the Crossfield planes. As I say the preference is for auto sims, but again even as I say that I realize that I have FAR too many dollars and hours invested in ATS/ETS2 and “they” have an upright seated position as well.

So it looks like one of each, really, upright and reclining. I realize that there are Monster mounts that clamp to the desk and they look nice but this desk does NOT and I want it gone. There is one not ten feet on the other side of the room that was my Late Wife’s Ethan Allen and is actual wood as opposed to this slumpy, tacky board horror. Mounting for monitors, especially a triple setup would be nice, but is not necessary as I’m largely VR so just need it for setup and I could potentially could wall mount it as well.

Your set up looks a bit like mine, L-shaped desk n all, have severe back problems too, broken neck bolted solid now (so VR is really out) so made a determined effort recently to make my sim/gaming time as ergonomically comfortable as possible, that meant a new quality chair, HOTAS mounts (I’ve described elsewhere here) Its made the world of difference to me, it really has … still have a Logitech Steering FF/wheel/pedals shifter for the second PC in my L shaped desk setup, still to fine tune that though, my focus is on flight simulation just now for many reasons.

I think you might be asking for a new off the shelf driving sim cockpit recommendation solution though?

Use a car seat. They can be had for a song at the breakers’. Comfy and feels real on your butt and back. They’re also made to be sat in for hours on end, adjustable from straight to F-16-like reclining. And the best thing, they don’t roll around like an office chair does, but slide back with a nice satisfying RRRRrrrrrT! 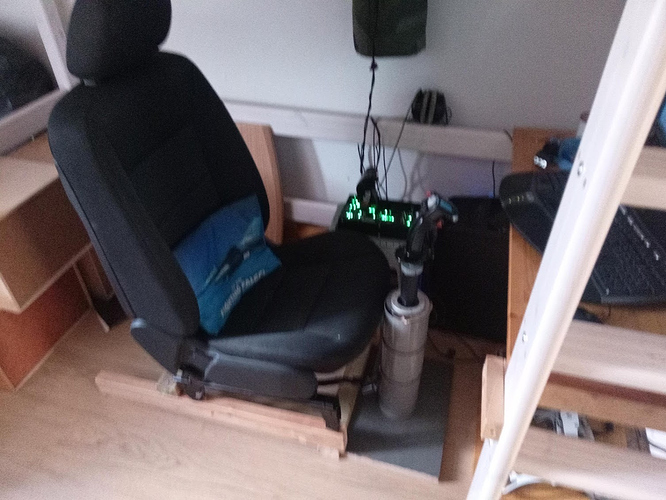 B12- Sorry about the neck! Mine gets sore as hell but I still have good mobility in it. But you are in essence correct I’m mostly looking for a PC Automotive cockpit solution. Schurem- that might just be the answer- Amazon sells kits of varying quality as well as with or without garish JDM-alike seat. Might just skip the seat in favor of stealing one of the race buckets my Son installed in his Camaro- that car’s on the trailer out front anyways. Plus the closest wrecker/breaker is in fact the EXACT location of my Wife’s untimely death on Highway 99 in Sherwood so I won’t be stopping there for long periods of time as my heart races every time I just drive through there. This may be of benefit in more than one way though, as since I get a “pinched nerve” every once in a while due to Corvette’s wonderful factory seats I’m almost needing a solution THERE as well. Just need a way to defeat the CANBUS system in the car that detects if all the junk is still fitted and we can mount some super-tough and bitchin’ Ebay seats in my ZR1 as well! And stiff Chinese foam would be an improvement let me tell you, the seats in that car have NO padding underneath and never did.

Never been a sim racer, the idea does appeal to me though and have a wheel, shifter and pedals … force feed back too that is ready to try once I’m up for it again … thinking relaxing Euro Truck and American Truck sim, rather than racing ones though

Have a look at MonsterTech in Germany, good stuff, bought loads from there, they do dedicated driving rigs too.

Playseat would be an option, a bit pricey though. They also have a Flight Sim version:

I agree with what Schurem says too, some of the most comfortable seats out there, especially for a driving rig are real car seats, they are comfortable for a reason, a visit to a car breaker yard might be beneficial, try several and probably available quite cheap.

B12- That’s the ticket! I’ve almost halfway convinced myself to hit the road what with ATS/ETS 2 in VR. But there we have the rub- WHAT truck do YOU know that is reclined in seating? Or indeed the flight deck of a 747? Or most GA aircraft for that matter? I’m thinking the car seat is a good idea but so also will be height as it sure would be immersion-breaking to have to drive a Scania from the prone position.

I’ve also seen a flight/racing combo on sale from Gleim as part of their aviation training program. The frame itself is only 579.00 so not too bad but I haven’t checked shipping yet.