I had one of those rare experiences in life where a friend sends you an email saying “Hey, did you want to go fly Apache helicopter sims this Friday?” There were not enough exclamation points in the whole intranets to express my excitement.

Flying some NOE near Bagram, Afghanistan.

The simluators were located at the Western Air National Guard Aviation Training Site (WAATS) in Marana, AZ. The facility is located at the Pinal Air Park, which – from the vantage point of the I-10 freeway – looks like little more than a boneyard for large airliners. 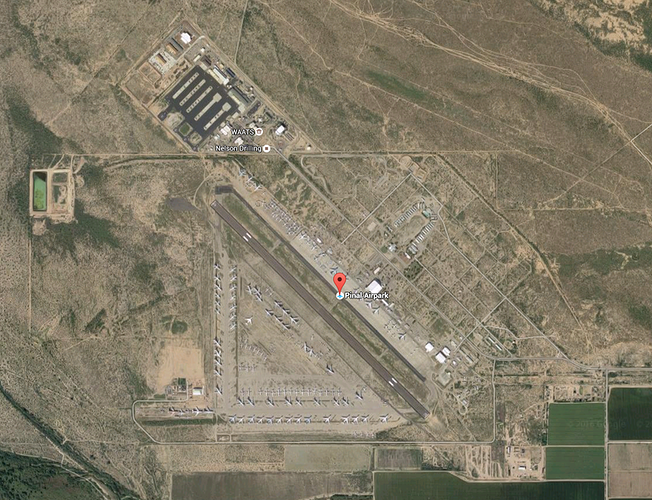 The WAATS site itself is huge, a lot more going on than I can describe in this post. You can read up more on the aircraft they train in here: https://az.ng.mil/WAATS/Documents/WAATS_WEB/Flt_Training.html

Interestingly, the simulators were all in trailers, able to be taken on the road. The US Army sure knows how to be mobile! 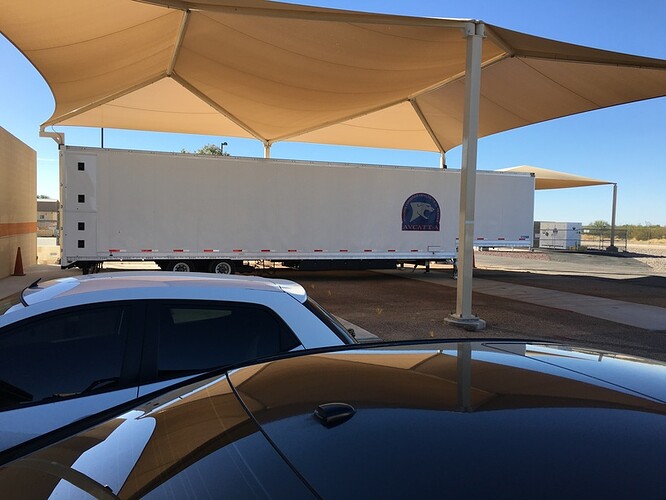 This is the AVCATT sim which has several lower-fidelity cockpit simulators in them and allows connection of many sims together – including external sims, like tanks, etc. – to support commander and larger scale training. This sim is apparently not used often. 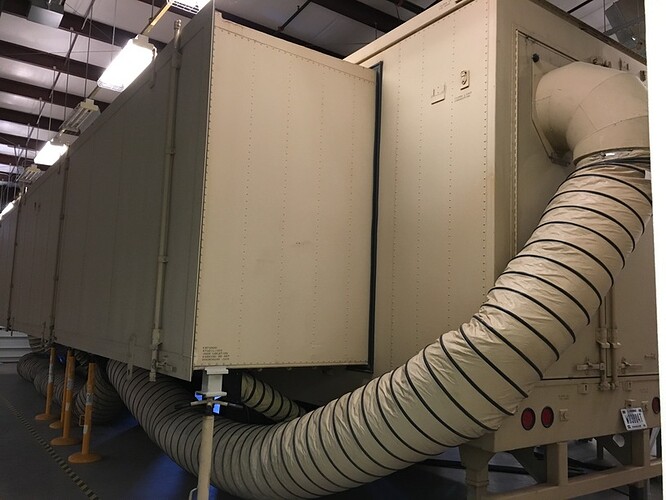 This is the Longbow Crew Trainer (LCT). It’s a trailer, but it’s set up inside, which must definitely help with cooling costs, especially in Marana, AZ!

The LCT has two “cockpits” - one for the gunner seat and another for the pilot seat. The two cockpits are located on opposite ends of the trailer, but are fully interconnected to each other. Stomp on the pedal in one cockpit or twirl the cyclic, and the same control moves in the other. The displays are fully synchronized as well - each sees what the other sees.

When we got to the sim, there was a crew (gunner and pilot) training, so the room was dark and we tried to be quiet and not interrupt their work, but the crewman in the gunner seat graciously exited to let us tourists take a spin. I certainly appreciate that that crewman gave up going home on time on a Friday just so a few tourists could play in his sim. 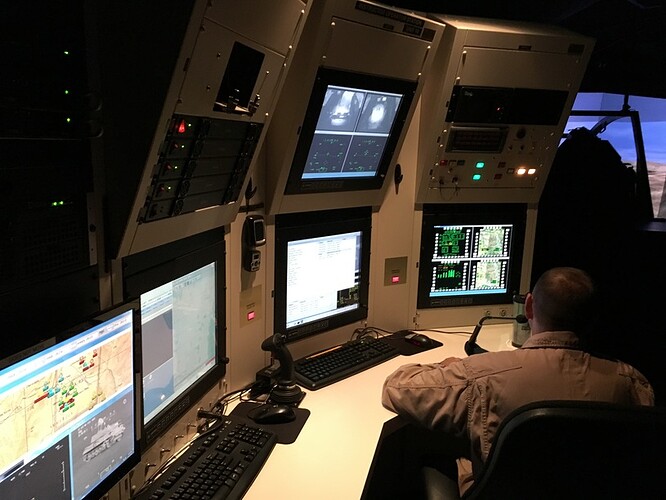 The simulator cockpit is “full real”, contains all the real buttons and switches from the actual cockpit. The seat actually pushes up against you back, bottom, and sides during flight, enhancing the illusion of g-forces pushing you around. Very clever.

The display is a multiple rear-projection system. The terrain is pretty blocky and the textures are OK, but eye candy is not the purpose of this tool. The blur of the moving rotor disk is modeled, which helps the pilot gauge proper attitude control. 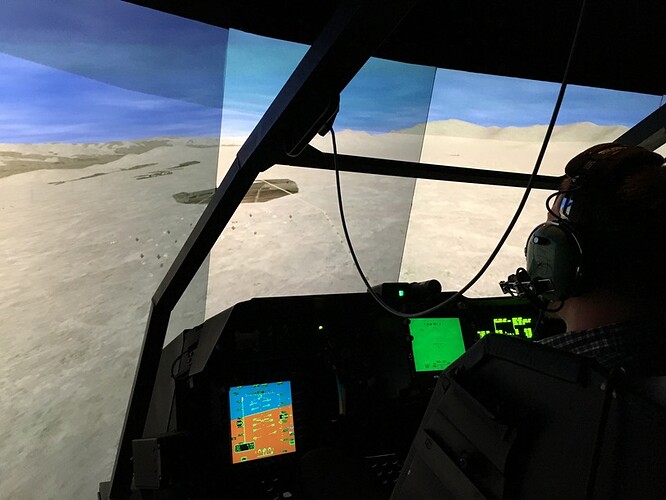 Collisions with buildings, terrain, or trees (yes, they’re collidable!) or being hit by enemy rounds results in flashes of red on the screen, but there’s no damage model. If you crash on the ground, the helo ends up rolling over and requires a restart by the sim controller, which takes 10-15 seconds.

When we hopped in, the crewman in the pilot station stayed with us and talked us through how to use the controls (the gunner station on the AH-64 also has a full set of flight controls). He’d talk us through how to pickup, do rolls, high performance turns, etc., and would take over controls when things got too wonky.

Most of the folks tried to get the hang of the gunnery, but the AH-64’s gunnery HOTAS is complex. With the number of people we had trying to play in the sim, we each only had 10 minutes of play time, and although a few hellfires found their virtual targets, and more than few tanks were given a new set of 30mm speed-holes, there were lots of cold passes without any rounds fired, because the noob gunner didn’t have the switchology right, and a few of the guys had to exit the sim without ever successfully firing a single round.

Rather than play “guess the switch”, I got a lesson in how to pickup (the pilot seemed impressed), made a couple running approaches (to keep the dust behind us), and then did some NOE flying.

I mostly enjoyed it. 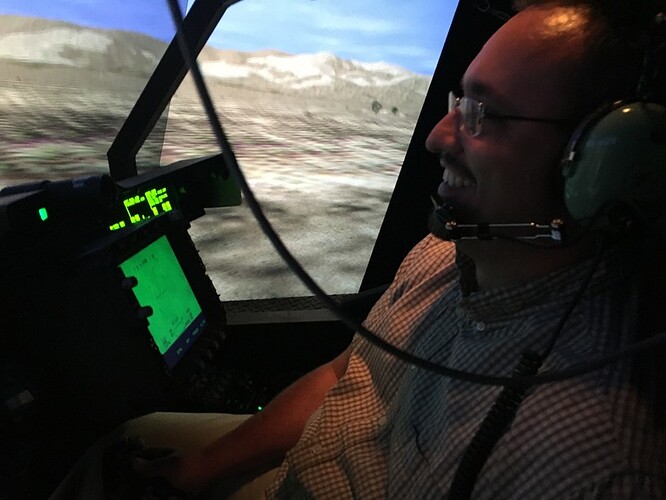 Here’s a clip of the flight: Wow, only thing I can say is:

I am so jealous…

I am so jealous…

No kidding. That is awesome. That feeling of speed was actually translated quite well in the video.

So how hard was it to pick up to a hover? Did it require some pedal to counteract the torque?

I assume the Pilot and CP/G in the real training get to wear helmets with the monocle and everything?

Dang…that is way too cool for school…

Does your face hurt today?

So how hard was it to pick up to a hover? Did it require some pedal to counteract the torque?

Not hard at all and yes, counter-torque was needed. The AH-64 has a force-trimmer system, so once you pick up, you trim the pedal and stick position in, and hovering is easy-peasy. Well, easy-peasy-ish.

I assume the Pilot and CP/G in the real training get to wear helmets with the monocle and everything?

Yes, the real crewman had legit helmets and the Evil Borg Monopoly Guy monocle. The pilot that supported us wore his for a good 3 hours straight - he was sweaty and had creases on his face when he finally got to take the helmet off, so it didn’t exactly look like a fun time, but I’d love to have seen what symbology the monocle adds and what it adds to situational awareness.

Actually, I think it does! At one point I saw the helo descending rapidly with some choppy motion, looked just like VRS. The helo was recovered before impact with the ground, though.

The AH-64D software was 13.3, if that matters to anybody out there.

I wonder how nicholas cage would do in this one…