I posted about this already, but on playing with it I think it’s thread-worthy.

This is a free add-on to inject real-world aircraft routes, flight plans, models and liveries into MSFS. You can use it with the sim’s Real Life traffic, where it’ll model/livery match for you or turn off the sim’s traffic all together and let this do AI traffic for you, based off of real world flight plans.

Setting it up is fiddly, and will involve getting a AVSIM library account and an AIG forum account. They do this as the approach for this add-in is not to include all the models and liveries, but be an automated way to access them, and give credit to each individual author.

Here’s the set-up steps and video: 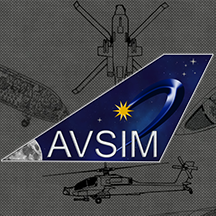 for complete beginners, from zero to hero (well hmm .. 🤞) Link -- https://gofile.io/d/DGROZo I dont have a YT chan and was too lazy to create one so i know a lot of people will not download and check the video, but maybe it will popup as you YT link...

Holla in this topic if it all goes wrong. I found the set-up tricky, but one tip is that once you change or make a setting then just restart the app - it doesn’t really pick up changes on the fly.

The add-on is split between two apps, the AI Manager, where you download the models, liveries and real-life flight plans that you want offline and the AI Traffic Manager, that injects and steers stuff around (if you choose to turn off the sim’s traffic) as you run the sim. It’s not obvious, so the AIG Traffic download is here (so you need to install both these apps)

Once you’ve got through the set-up, you essentially pick airline flight plans and it automates it from there: 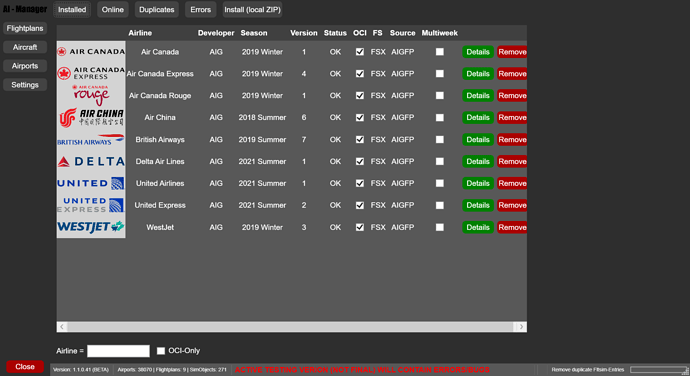 Here you can see it grabbing a China Eastern Airlines A319-100 skin for a model it downloaded. 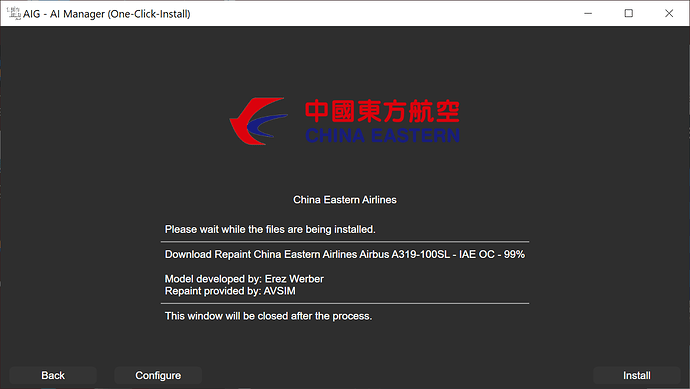 Sometimes the source of a model or livery is not in a place that can be automatically downloaded, so the app opens a browser window and then asks for the location of the zip download.

The Traffic Manager runs when the sim runs, but only if you want to use its AI to move the planes around. It does seem to do a better job than MSFS, as things actually take off. I’ve seen the AI do some weird things, so I guess early days. If you use this form of traffic then you won’t get ATC heard from them, that’s on with MSFS Real World traffic on, and not this. That’s incorrect, the AI Traffic does have ATC in-game, which is really nice!

Here’s the Map overview of the running traffic at CYVR 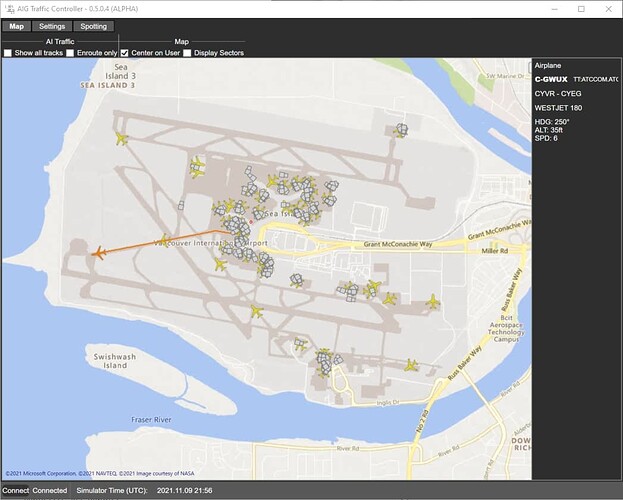 You can see I have flight WestJet 180 to CYEG selected. Because it follows the real-life times/routes, you can check in the AI Manager (that imported the flight plan) that it’s correct: 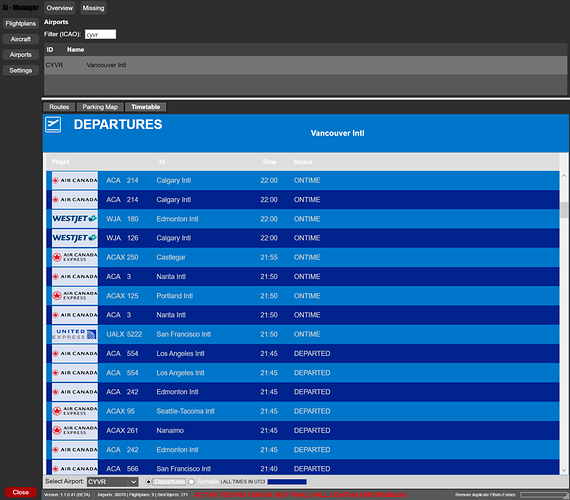 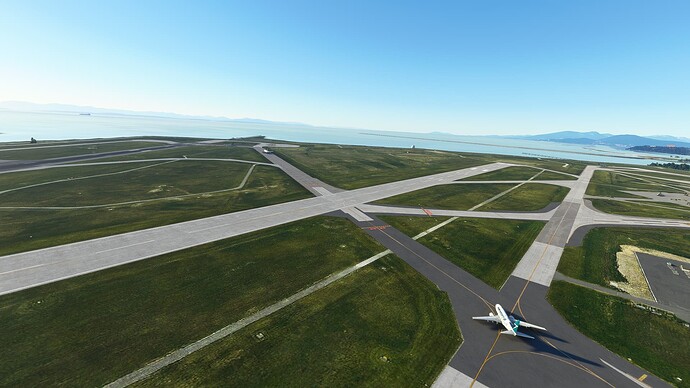 Neat, they are all at the right gates as well… 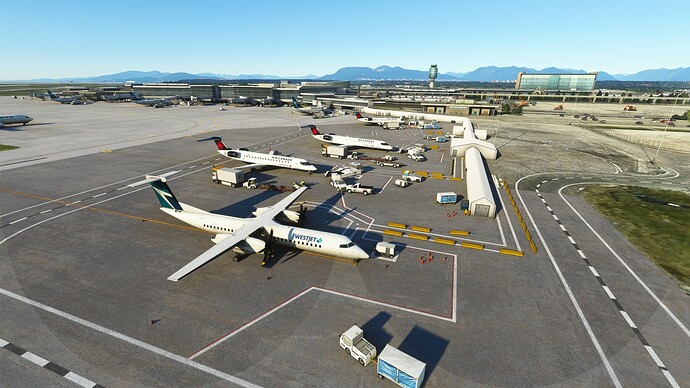 It’ll be interesting if this still works with SU7 in a couple of days, of if Microsoft have fixed up the sim traffic.

It’s nice looking. Somewhere like KFSO is fairly chaotic as the parked traffic gets ready… 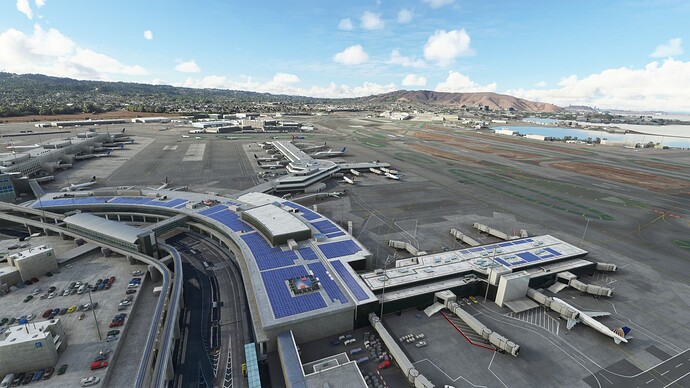 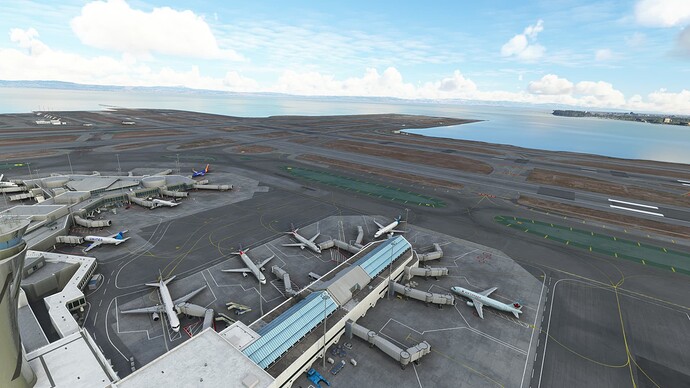 If you change time in the sim it brings up the traffic at that point in time, so not relegated to late-night trips anymore in the evening. 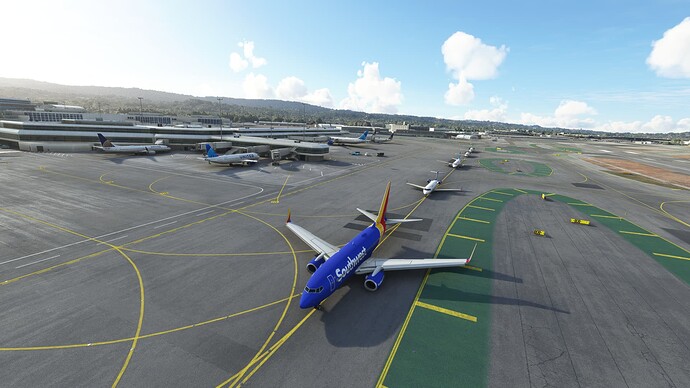 Even with a large amount of AI I’m not seeing any FPS impact. Look at them all march to the 28’s. 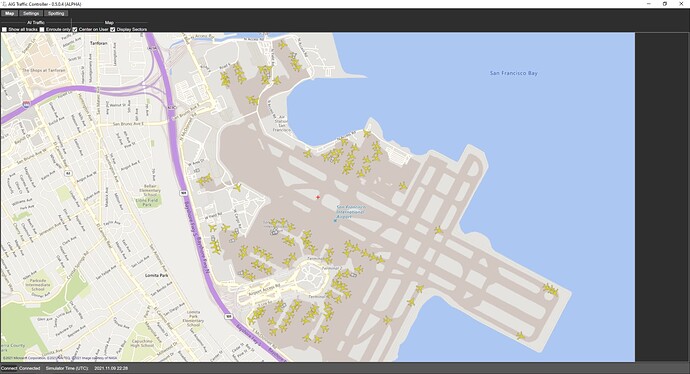 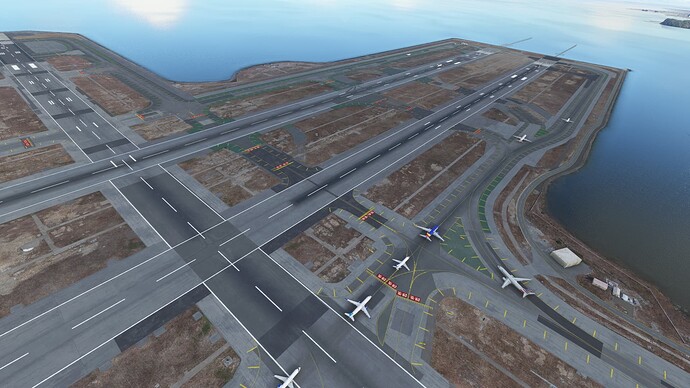 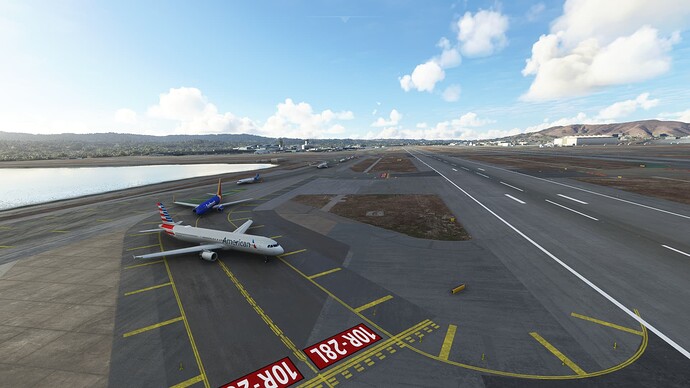 So looks like when first starting it, allow it to settle down a bit - it’s a Demolition Derby while it sorts itself out. In theory I should be doing pre-flight for a while anyway, so hopefully I don’t have to simulate being #27 for the runway.

Really enjoying using this. Traffic isn’t quite right some of the time. Any pilots (or sim pilots) spot what’s the issue here? 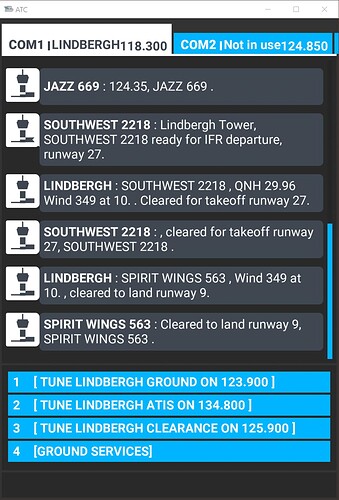 (or maybe this happens at KSAN, winds are relatively light?..) 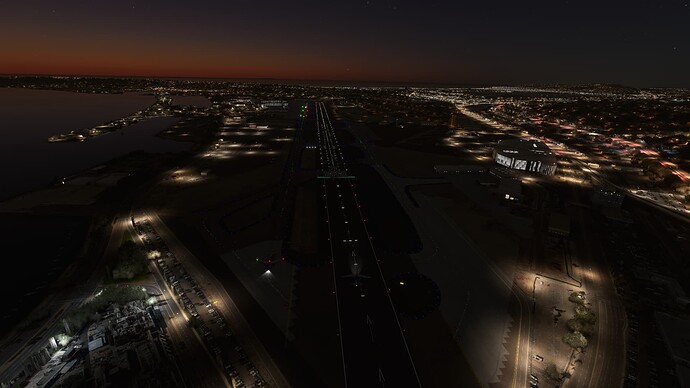 EDIT: I watched and they both made it, with Southwest 2218 taking a sharp right after take-off and the Spirit yellow thing landing comfortably. Perhaps a night time noise restriction thing, with the wind from the north then it uses the ILS where it exists, rather than the ‘see the museums over downtown’ nice KSAN 27 RNAV. Dunno. It’s actually kinda fun just to watch them get on with it…

A nice set-up video that describes the 4E24 steps: It looks like a neat addition! The conga line at SFO seems pretty authentic.

Regarding San Diego, I think I have only landed on Runway 9 on one occasion and that was due to strong winds associated with a storm system. All other times I have landed and departed on 27.

I wanted to give it a try but the AIG AI Manager would not launch (updated, run as admin, let do its thing for some 15mins… nothing; nothing even in task manager).

While I could troubleshoot and perhaps get it running, somehow I back off and go fly instead. Pitty. I will try with a new version, once available.

Possibly the most frustrating, and wins the award for “doesn’t seem to work for no apparent reason”, freeware app of all time… however, when it works (which it does for me after multiple attempts and tweaks) it’s absolutely amazing! Now there are a number of bugs where planes occasionally stop on the taxiway, go around, etc. but for immersions alone, it’s extremely rewarding! I love it, Plus it works on VATSIM. One of it’s greatest strengths are the models. They are fantastic and far better looking than JF’s Traffic Global in XP.

Getting a bit super niche here, but a companion app for the companion traffic apps.

AI Companion allows you to monitor the traffic outside the sim, plus has a handy dynamic traffic limiter for performance. Some of these things can be done in the AIG apps already, but I guess this thing takes it to the next level of detail/info.

You’ll need FSUIPC installed and a forum login to install it.

Some pics of the sort of thing it does. 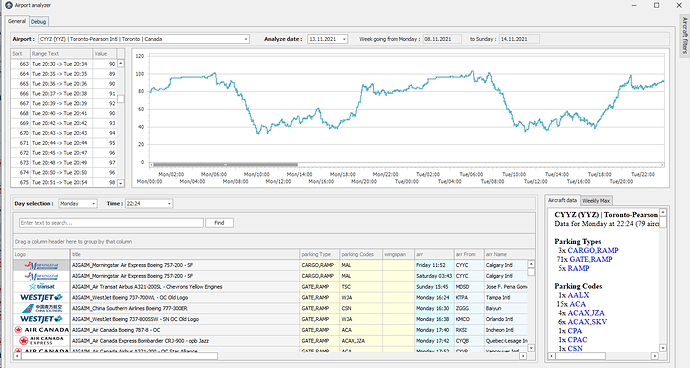 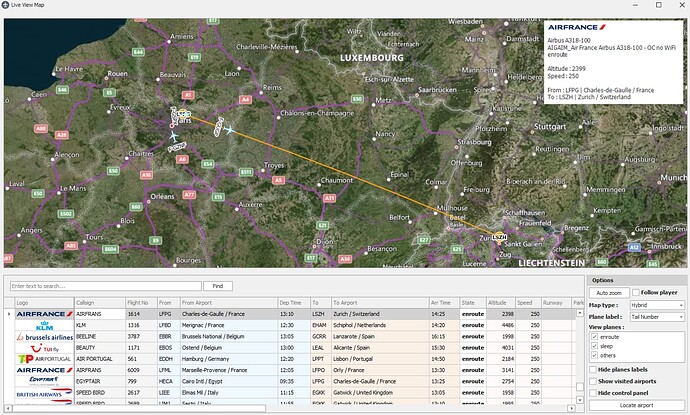 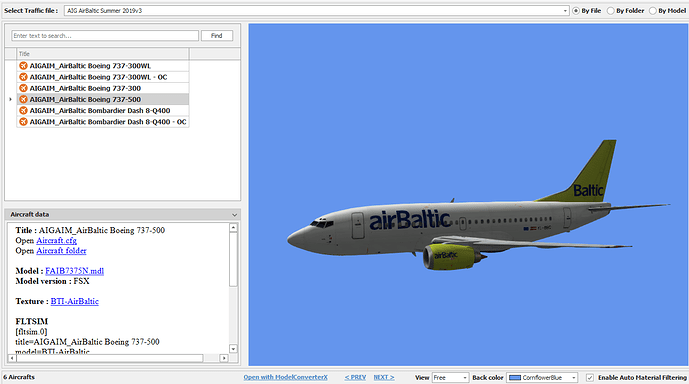 There was an update to the AIG Manager where the AI traffic now get all the airport services (baggage, pushback etc). To update do this:

This mod is pretty neat, even if the inflight AI can sometimes be a little crazy. Check out LAX, a lot going on… 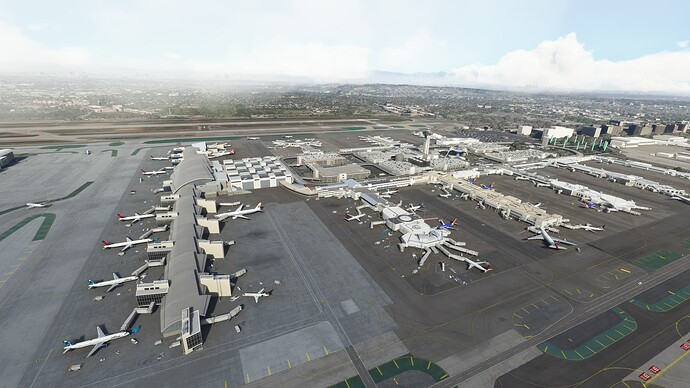 Appreciate the update @fearlessfrog ! haven’t been to their forum since I got everything up and running. This is a nice touch.

Update available. The A330 released with native MSFS model and effects. You need to update your flight plans, and then do a ‘Verify Setup’ step in AIG Manager.

I’m happy with this free add-on. Makes things quite immersive as I buzz around in my short-haul pencil. 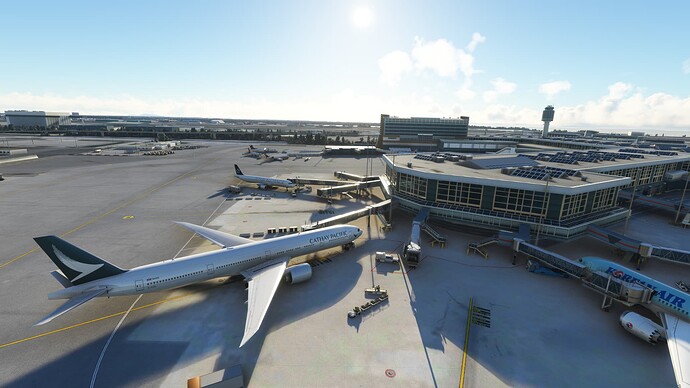 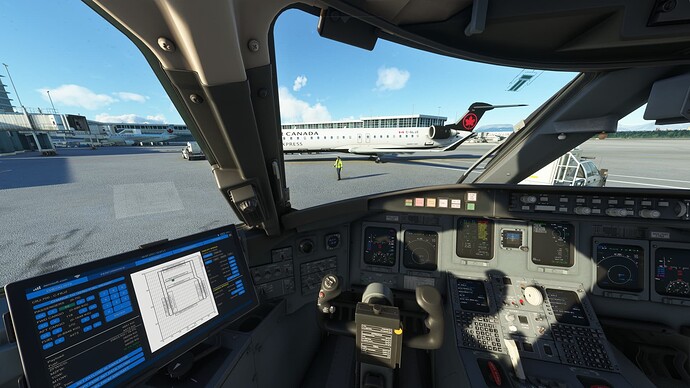 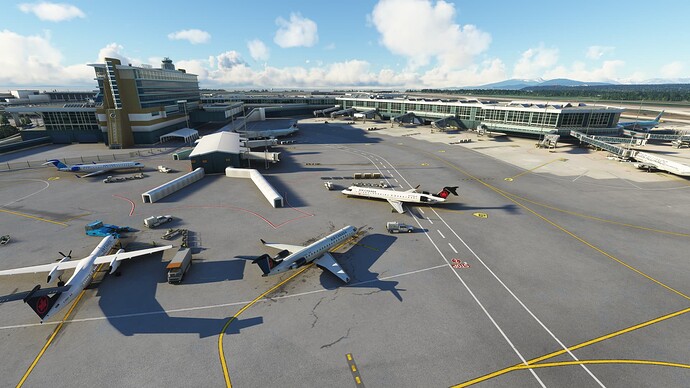