I have a Coolermaster MasterLiquid Lite 240 unit cooling my CPU. I used to have it in my previous case mounted… not exactly per regulations. So when I done bought a nice new case, I expected the thing to work perfectly. I put the radiator right up to the top of the case, exhausting outwards. Way above the pump. Should be superb. But no such joy. It rattles. Like an old hard drive.

So I went and googled the problem. Turns out air got trapped in the pump unit and is disturbing its smoothness of operation. The fix that is doing the rounds is to tilt the box this way and that while it’s running. So I did that last night. And indeed, tilting it sideways made the noise go away. Alas, when I put the box back on its feet, the rattling picked right up again.

Is this thing dead? it’s about 18 months old now. It was a cheapish model. I’m thinking of just straight up replacing the fokker.

Yeah I could put it in the front, but then the pump would be above where the hoses connect to the radiator, a big no-no or so I read.

What are ideal ways to mount the radiator?

One good mounting position is to mount the radiator of the cooler at the frontal area of the case interior. The side of the radiator where the tubes connect should be at the bottom, and the pump should be mounted in a position where it is slightly lower than the top of the radiator, where air is captured.

@schurem they say it was an unlikely thing…but my AIO started like that, and then it spilled its guts on top of my 1080Ti, killing it.

I wouldn’t mess around, get it replaced asap.

I used to have it in my previous case mounted

The ‘experts’ (Jay’s 2-cents was one, I think) say that over time the liquid does disappear. Forget the 64-dollar word for it.

That’s my thought, you’ve got at least a tiny leak in there.

is there any way you can mount the rad vertically

This is my old gaming rig, that I mounted in a new case for a number of other uses. In the old case, which had the CPU cooler mounted horizontally at the top, it used to burble like mad. In the new case mounted vertically as shown, it’s completely quiet. 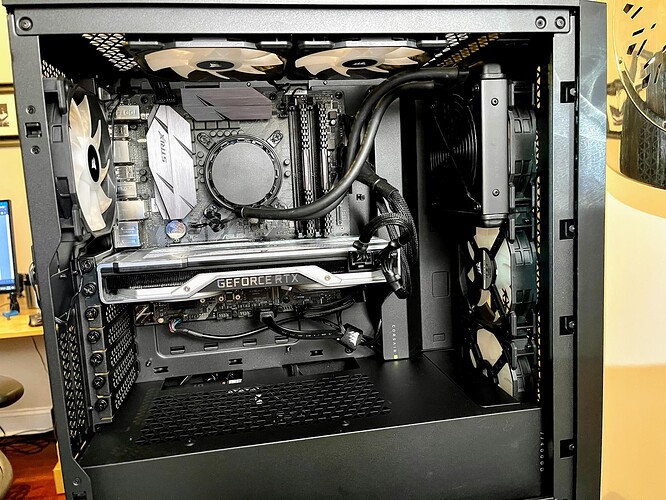 Allright, I ordered a new one, arctic 280 thingamibob. Until thats delivered, I’ll remount the old one in a vertical orientation.

Thanks guys, for all the input.

Edit: mounting the radiator as shown in @chipwich’ pic fixed the noise. I still don’t trust the thing, so not cancelling the order.

My PC now heeds the writing on it’s case and fans: Be Quiet!

Edit2: Nope, it started burbling about two minutes after I posted that. Took delivery of an Arctic Liquid Freezer II 280 today, mounted the thing the right way (vertical, hoses at the bottom, top above the pump level) and it’s inaudible.