“In less than five months, we had four aircraft on the ramp to test at Holloman Air Force Base and, last night, I just got the test report. So in less than 11 months, with five pages, we have tested four aircraft for a potential light attack aircraft for the United States and allies,” she said during a December Senate Armed Services Committee hearing on acquisition reform.

“[The aircraft] conducted live-fly exercises, combat maneuver scenarios and, on some occasions, weapons drops during the Holloman demonstration.”

“The service intends to test the Textron Aviation AT-6 Wolverine and the Sierra Nevada/Embraer A-29 Super Tucano from May to July 2018 at the base (Davis-Monthan), it said in a release Friday.” 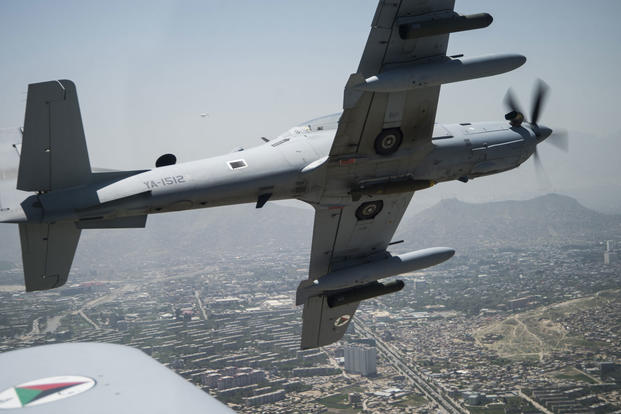 Air Force Chooses AT-6, A-29 for Secondary Light Attack Experiment

This is going to be good.

Cuddly! Exactly what I want in a CAS killing machine!

Dollars to donuts the USAF will say that the F-35 will do everything better and they’ll shelve OA-X in favor of new coffeemakers at the Pentagon.

Those were the radical options though… a completely new CAS jet, or a farmer’s plane with bombs: the high end and the low end.

I really wish we could get the gouge on how the Iomax AT-802 has done for UAE. Like what kind of damage have they done, what kind of missions are they flying, and have they taken any loses. The new company CEO says this:

“He told AIN that the aircraft supplied by Iomax have already delivered “over 4,000 munitions…laser-guided bombs, Hellfire missiles and rockets.” He said that Egypt has formally requested more aircraft from Iomax, and that there is significant market potential throughout Africa and Central and South America.” - Nov 3, 2017

Interesting. Wonder why the “Scorpion” didn’t make it?

Really late to the party on this whole endeavor, but when did a Light Attack aircraft become a thing for the US? Aren’t these usually the kind of planes for Central/South America economies? Where would it get used?

Where would it get used?

Border patrol. Never know when the Canadians are gonna get restless. Tim Horton’s smugglers. The lot of them.

Is this the plane they wanted for COIN ops with 6lb mavericks ? And precision optics?

From the article that Beach linked…

“This effort to find a lower-cost and exportable aircraft for permissive environments is directly in line with the National Defense Strategy,” said Air Force Chief of Staff Gen. David Goldfein.

“A light attack aircraft would not only provide relief to our 4th- and 5th-generation aircraft, but also bolster our interoperability, so we can more effectively employ airpower as an international team,” he said in the release.

It sounds to me almost like NATO standardizing on 9mm and 7.62

Where would it get used?

I wonder if the white house have factored the cost of close air support for the construction crews into the business case for the Mexico border wall.

Light Attack was actually a thing in Vietnam; it was only afterward that all the branches abandoned it in favor of expensive, complex solutions (because we would never be doing COIN again, or so the brass and pointy-nosed fighter jocks wanted to believe).

Going back to it now is basically a serious no-BS analysis of the past 17 years of conflict and looking at whether or not it was effective to use an expensive pointy nosed multirole fighter to drop bombs on a tent in the desert. Basically, they used up a bunch of life on expensive aircraft before replacements were available (as well as the budget to get them) and they might be looking at avoiding that mistake in the future by having a cheap COTS solution to save wear and tear on the primary fleet.

Thank you, that answered it pretty well.

was hoping the scorpion would somehow make it.

was hoping the scorpion would somehow make it.

I wonder if they will continue development in search of an export market?

was the scorpion’s performance that bad to lose out to 2 prop driven planes that have been around for decades?

was the scorpion’s performance that bad to lose out to 2 prop driven planes that have been around for decades?

Your first mistake is assuming that it has anything to do with performance. C’mon…this is a defense procurement process and contract - most of it will come down to where parts are built, where the jobs will go, and who does the right lobbying. I’d love to believe it was/will be a methodical look from a purely statistical and military needs based viewpoint, but I’m not confident that that is the way these things work.

The Scorpion wasn’t designed for rough field operations, which I believe was one of the requirements.