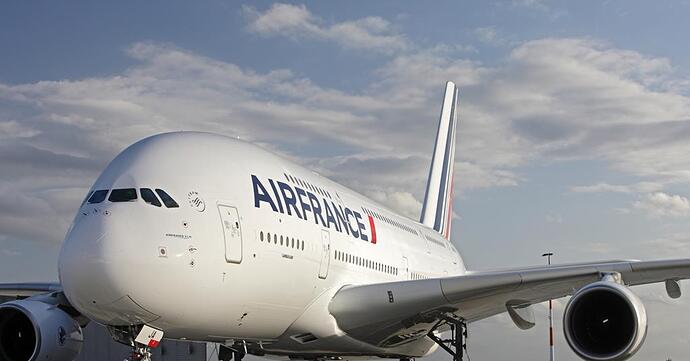 Air France has accelerated plans to phase out its Airbus A380 fleet and will retire the aircraft immediately rather than in 2022 as previously scheduled.

I’ll never understand the economics of air travel. Write off 500m in used aircraft and then order 10 new A350 to cover the work of the cancelled aircraft. I understand the efficiency savings etc but I’ll never be able to fathom how writing off that money makes sense.

I wonder if the 380 Design could be converted to a freighter? It would surely carry more than a 747.

Well that was bad planning!

IDK, there are quite a few operating still. You’ve got options once we get past the pandemic.

I think they should cut the wings off, weld them all nose to tail and weld the engines to the roof to make giant trains. Boomtown! Easy fix!

The entire A380 program has been a failure. The design was based on a concept (major hub ops) that didn’t pan out.

“There are only so many slots at the world’s major airports, you can’t get more planes in there, so to move more people you need a bigger plane.”

Yup, totally true. Except instead the smaller planes got much better range and now you can fly from a smaller city to another smaller city direct instead of having to pass through Atlanta or NYC or London or whatever.

Nonstop direct flights took over and the need for the 747s and 380s dropped. At least Boeing was smart (in THIS case) and invested a lot less in the 747-8 than Airbus spent on the 380, and they got the freighters. That’s why the 737 MAX debacle was earth shattering to Boeing and the 747-8 selling a fraction of what the -400 did was No Big Deal.

I wonder if the 380 Design could be converted to a freighter? It would surely carry more than a 747.

Still too expensive, even 747’s are loosing grace as freighters.

Having 4 engines these days is never the right choice, it was the right plane at the wrong time for a job that was fading away.

The skies are going to look a lot less funky in the future when all you’ve got left are A350’s and 787’s.

That’s harsh! Nothing looks as good as a 747-8 passing overhead on the same overwater track. (Well, it would look better with me in it but thus is life.) Anyway, a 7-4 in the flight levels doing .86 and dominating the environment she was built for is a lovely sight to behold. A350? 787? Not so much. But it is true that the economics, even prior to COVID, had moved away from big widebodies. The 777X is more than big enough to handle most any civilian mission.

Ironically, those same twin engined efficiencies are hitting a brick wall. As the engines got bigger and bigger the fuel efficiencies went up but so did the drag. What is the 777X fan diameter now? 110 inches or something? They are also losing clearance below the cowling. They can either jack up the gear even higher, which poses so many problems, or make planes with high or mid wings instead of low.
Or maybe place the engines overwing? That makes maintenance harder.

High or mid wing means the wing doesn’t block as much of the noise in the cabin like it does now. Engines at the tail present balance problems if they’re that big.

Distributed propulsion may be the next step. A pair of powerplants, located wherever, or mixed power and batteries (or even batteries only or fuel cells who knows?), electrically driving numerous fans/props/ducts/whatever all over.

To be fair, I don’t blame the engineers for 380’s failure. It was perfectly capable at an engineering level, its numerous foibles over the years being par for the course for any big plane. It was designed to the specs the execs came up with and the execs misread the market. Sure that’s fortune telling to some extent, but that’s why they pay them those inflated salaries (like any exec does 100x the work of some line worker), to be right when it counts.

I think I remember reading that the 747 took 20 years before it turned a profit. The A380 was never intended to turn a profit by anyone grounded to reality at the time. It was a European vanity project which could have potentially, on paper, break even by 2040. The A321XLR will probably be the most profitable airliner for the next decade or two. Boeing paid a heavy price for not coming up with a viable follow up to the 757. Sometimes the market punishes justly.

Was told by 747 Capt. that the middle deck structure was integral to aircraft structure, so cannot be removed. Which is rather limiting to airframe versatility.

The last Oshkosh that I attended - when was that - maybe a decade ago, the A380 was the main act. It made a grand entrance and over the 2 days that I was there, did a number of high performance takeoffs and fly-bys. It was a really impressive piece of engineering. The captain was an EAA member and charmed the crowd as well as he pleased them with jumbo aerobatics. At the time, Boeing was looking like it was stuck in some concrete thick institutional inertia.

All Airbus needed to do was read Boeing’s research on the planned double decker 747 to know that the A380 was not going to be economically viable.

As the engines got bigger and bigger the fuel efficiencies went up but so did the drag.

Doesn’t matter, we are flying slower anyway, the drag the engines cause is not really much of a factor given that you need a larger diameter to move more air anyway.

They can either jack up the gear even higher, which poses so many problems

When you start with a clean sheet design it’s not really a problem, it’s mostly a 737 problem because Boeing didn’t want to recertify the airframe. Putting higher landing gears on an aircraft is never a problem, see the triple 7.

Distributed propulsion may be the next step. A pair of powerplants, located wherever, or mixed power and batteries (or even batteries only or fuel cells who knows?), electrically driving numerous fans/props/ducts/whatever all over.

Absolutely, right now we are getting fuel efficiency thanks to AI designs and fancy new manufacturing tech that allows us to work with a lot of closer tolerances! It’s really neat.