So I’m only 60 seconds into exploring this module and thought I’d pause a second to mention that I think I’m going to really like this aircraft. Why do I say that after only 60 seconds? Because when I went to start it, I engaged the starter and the panel and annunciators all dimmed for the duration of the time the start switch is held in the start position (usually through 50% turbine/N2). Once the start switch is returned to off, the lights pop back up to full brightness. Just as it should. One thing I’m not so sure of (I’ve got thousands of hours in the -200/B200 - but only around 100 hours in the 300, and none in the 350) is that in the King Airs I fly (which are not triple fed bus equipped) - if you turn the starter back on after turning the respective side generator on, it should kick the generator off on that side. It may be different in the 350 I’m willing to concede (but I bet not!).

And for those that might have missed it in the other thread (and since this might now be a gathering place for 350 pilots) - here is the link to the Reality XP GTN 750 mod to put the 750 in the panel: 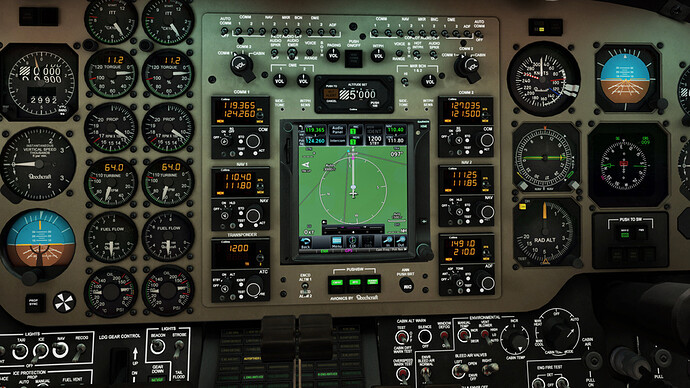 Looking forward to further exploring the 350. There are a really nice range of options and menus. I really like they included many 2D pop-up panels. I’m still a fan of those for some operations…

Not sure about their electrical system modeling though. Again, not a triple-fed bus savy pilot any longer. Pretty sure though that with the voltmeter bus select switch, you should be able to read the individual bus voltages. This is where it can get a bit system specific though, and I’m not knowledgeable enough about the 350 system, nor where the voltages are read. For instance, in the Citation, you have a 28.5V generator out there spinning, and even if it is disconnected from the system, you still get an indication of 28.5V when you use the voltage selector to see what it is doing. I’m not sure where the 350 picks up the voltage…from the generator bus or the generator itself. The fact that the voltmeter is labeled “BUS selector” makes me think it is the bus. In which case, in a triple fed bus system, each bus is provided power by the left and right generators AND the battery (triple = 3). So any one of the three can power all the buses (the battery for only a limited time though obviously). If it is showing bus voltage, then I think it is correct - 28V across the spectrum if either generator is online.

I will say that you should be able to close the spring loaded BATT/LGEN/RGEN cover without turning off all three switches. It is lightly spring loaded to rest over those switches but to actually close them, you have to press firmly to “gang bar” the system to the down (OFF) position.

Looks like they did model the prop governor test switch and behavior - not sure if that included the rudder boost “kick” that would normally occur at the top of the torque range. Auto-feather test does not look like it works correctly. Not sure how it works in the 350, but in the 200 you would hold the test switch to TEST, advance both power levers to around 500 lbs. of torque, then slowly reduce one, at around 400 lbs. the opposite side autofeather light extinguishes (disarms) and at 200 lbs. the reduced throttle engine should attempt to feather the prop. Repeat for the other side. Now I’m noticing that this 350 panel only has an amber autofeather OFF annunciator, not two green autofeather armed lights, so the whole system could be different. I’ll have to do some reading up on that.

They do have the wrong kind of knobs on the condition levers. They duplicated the prop knobs, but they are distinctly different so that the tactile feel is different (so that you don’t inadvertently pull to the condition levers back to cruise power instead of the props…lol…). You can see the differences in the throttle, props, and condition lever knobs in the real airplane here: 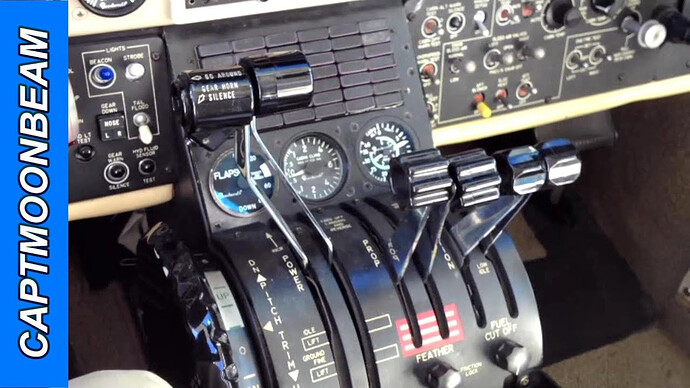 Ice vanes are sorta iffy maybe. Usually, you’d get a slight torque drop and slight ITT rise as you extend the vanes. Looks like they modeled a slight (and immediate) N2 rise of .6%. The vanes run out over time (like 8 to 10 seconds) so any changes to the instruments occur gradually over that period. I doubt the 350 is any different than the 200 with regards to this engine behavior, so that isn’t quite right.

I’m also not seeing an actual ice vane door movement on the bottom of the nacelle. It hangs out quite a bit when deployed.

I’m very much enjoying reading your feedback Beach. Since most of us have never flown one IRL, it’s great to hear all of the little details, right or wrong. From a virtual only POV, I haven’t found and deal breakers. But good to get a contrasting opinion.

I think I might be wrong about the ice vane graphics perhaps. Looking at the 350 nacelle, it has a couple cut-outs on the bottom and I wonder if perhaps the ice vanes (or inertial seperators as it were) are now tucked away up in the nacelle to provide less drag (?). So keep in mind that all my observations are not necessarily true. The 350 came a long way from the 200 in terms of design and systems…

I haven’t found and deal breakers.

Nor have I. I really like it…and feel it translates the King Air experience very nicely. I think I’ll really like it. Having a great time exploring it for sure!

Auto-feather test does not look like it works correctly.

This is an incorrect statement by me. It looks like the 350 has moved the auto-feather annunciators for the L/R engines up onto the torque gauges themselves - smart move…it is less eye travel to look at it there while you are setting power. The logic looks like it works perfectly…at a certain low torque level (looks like 18%) (with the switch set in TEST) the lights illuminate. Bring one back slowly, it disarms the other, then when the lever is retarded fully, the prop cycles into and out of feather. Just as it is supposed to! Nice!

One other little quirk - moving the ALT SEL window should NOT disengage the ALT hold mode of the flight director. Instead, both ALT SEL and ALT should be displayed on the ADI, letting you know that a different altitude has been selected in the preselect, but you aren’t going to leave your held ALT until you select a mode (IAS, VS, CLIMB/DESC, or PITCH). You have to consciously deselect ALT so that you don’t inadvertently start down too early on an approach. The way it is in the Airfoil Labs requires you to move the ALT SEL preselector, then re-engage ALT hold mode to assure you don’t start to drift somewhere. Lots of modules get this wrong - in all different types of aircraft.

I’m thinking that may be an X-Plane autopilot thing. I have also noticed that with a lot of modules. It can be rather annoying if you are not expecting it. I find it somewhat baffling because this is very basic, and universal autopilot behavior. Why did they (Laminar) choose to do something so different?

Can someone else verify that you don’t get a psuedo-glidepath on an RNAV/GPS LPV approach? I just shot one into KAVL (Asheville, NC) since I’m familiar with that one. It actually flew everything fine, and the altitude constraints were in the FMC. At the final approach fix (with the autopilot/FD in approach mode) the airplane headed down the 3 degree glidepath just fine, but there was no psuedo-glideslope information displayed on the ADI or HSI. 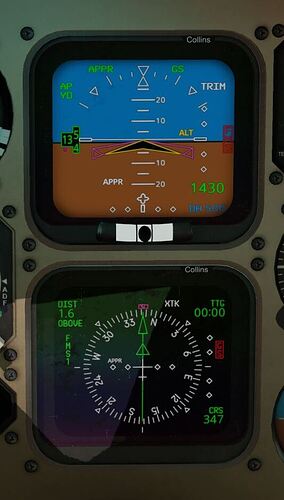 So the GTN750 looks great in the panel. Unless I’m missing something in the instructions though - I’m not able to use the touchscreen portion of the unit in the virtual cockpit…I still have to resort to using the pop-up 2D window of the GTN to actually manipulate the data. Not a big problem in 2D, but in VR it doesn’t work out very well.

The 350 looks great in VR, and performs well, but there is some work to do for good VR integration. Some of the instruments are very, very hard to tune (like radios and the altitude preselect) in monitor based virtual cockpit…so it is even moreso hard in VR virtual cockpit. You have to have the mouse pointer or your hand controller in just the right spot. Not deal breaking, but not yet ideal either. Hopefully Airfoil Labs will continue to work on refining the cockpit interactions. 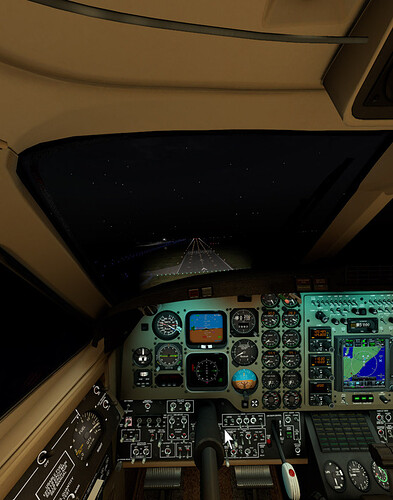 When I look at that cockpit, it amazes me that I was able to fly it competently at one time (well, the B200/C90/F90 at least). So many switches, knobs and steam guages. It makes the front office of the Global seem almost devoid of character by comparison.

I sometimes really miss the old Collins and Sperry panels I used to fly in the old B200s and older Citations. I think the G1000 panel is really cool and all…but for the nuts and bolts of just keeping things simple on an approach - I sort of miss those old green-needle approaches. We still do some of course…but I’d have to think hard about the last time I flew a DME arc or VOR approach with stepdowns. I did get to shoot a LOC with stepdowns a few weeks back into Huntington, WV since their GS was out…haha…

Ah Huntington… I used to fly in there a lot when I flew out of Zanesville Ohio. If you ever saw the movie We Are Marshall, you will know that airport has an unfortunate history.

As for approaches, yes indeed, everything is simplified these days. GPS has changed everything, with LPV approaches making VOR or LOC only approaches increasingly redundant. That is progress for you.

I’ve always compared shooting a non-precision approach to runway 12 in Huntington to descending into what looks like Hell. The clouds are lit from below from all those flare stacks from the refinery west of the river…and you pop out of the clouds and it is a mass of machinery and flames belching…LOL…

I’m not able to use the touchscreen portion of the unit in the virtual cockpit…I still have to resort to using the pop-up 2D window of the GTN to actually manipulate the data. Not a big problem in 2D, but in VR it doesn’t work out very well.

Haven’t tried it in VR yet, but the touchscreen works fine for for me in 2D. Using ver 1.2 of the GTN750 panel integration mod.

Dual GTN mod has been created too…

Mods for changing the panel to gray or black:

Airfoillabs King Air 350 Black Cockpit Panel replaces the stock panel. Put these in the Objects folder of the livery of your choice. 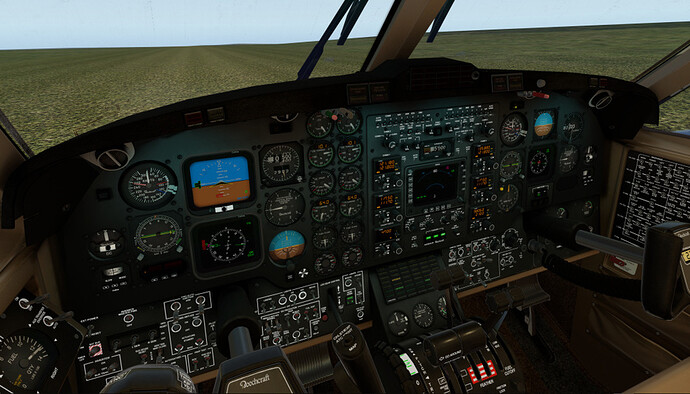 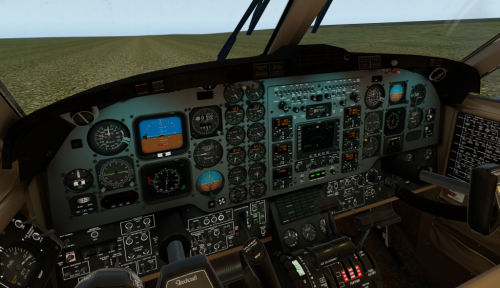 Airfoillabs King Air 350 Gray Cockpit Panel to replace the stock panel texture. Put these files in the Objects folder of the livery of your choice.