Any good WW2 tank sims that have a SP?

Looking at the current crop of offerings there’s basically some good MP titles out (Post Scriptum looks excellent), but I much prefer single player given the option most times. Anyone have any recommendations for anything relatively modern (I still have Panzer Elite installed) that’s good?

I don’t have it but doesn’t IL2 Tank Crew have a decent campaign?

Yes, IL-2 Tank Crew has a number of options, both scripted and the dynamic campaign.

I’ll have to look into that one, I had forgotten about it.

I did not know how I would like Tank Crew but once I started driving the tanks around I found it more fun than flying the aircraft.

On the same page here, @jenrick. Been playing too much War in the East recently, reading too many books by Wehrmacht generals, and hankering for some tactical stuff like Panzer Commander, a great old game with many historical notes, but my CD of which will not run on Win 10 (even with compatibility options).

Friends on Discord keep recommending Steel Beasts, but it is a bit too modern for what I want right now. Carefully created SP missions in DCS CA sort of scratch the itch if I steer away from missile launching vehicles (makes the mechanized infantry possibilities very limited).

And someone recommended War Thunder. But, it is War Thunder, isn’t it?

Had it a while back, before it had tanks, and was not impressed by the way the game “works”. Maybe worth a second chance for this purpose, but I cannot see them having changed their “method”, honestly.

I did not know about the IL-2 option… thanks!

I did not know about the IL-2 option… thanks!

If you want to dip your toe online this one is pretty fun.

Pilots and tank crews! Fight in the air and on the ground! Victory at any cost! AIRCRAFTS: ★ Taking off from the airfield with a warmed up engine (any weapon); ★ Full real, warmed up engine only. TANKS: ★ Limited tanks - losses is step to lose...

This guy does a nice job on videos for games. He’s starting a new series on the IL-2 Tank Crew DLC. You might want to follow along and see if this is something for you. 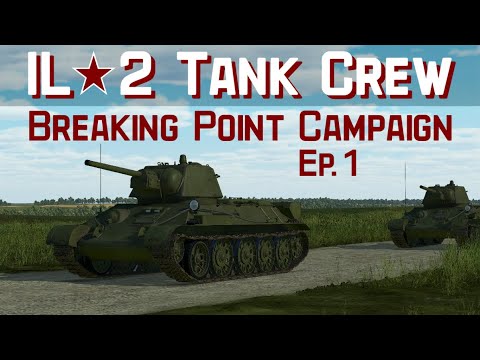 itch if I steer away from missile launching vehicles […] But, it is War Thunder, isn’t it?

The higher tiers in War thunder also have guided missiles, all the way up to attack helicopters with hellfires and vikhrs. Although I have some hours in I find it difficult to recommend. In realistic battles it can be quite tense and fun, especially if you play in an era you enjoy. There are two things that are kinda ruining the experience for me personally. One is that over the years, so many nations and vehicles have been added that it is hard to imagine your current game is representing a specific era or battle. This is exacerbated when the matchmaker can’t find enough players for a believable scenario, and it ends up recreating the Normandy invasion where the Germans, French and Swedes invade the beaches that are being held by the Japanese, Chinese, Americans and Russians. Another thing is that, while I think it’s cool that we have cold war stuff, late war and early/airborne cold war stuff gets mixed. In the past, we had brilliant battles between the likes of the King Tiger, the IS-2 and the super Pershing. Nowadays such battles get mixed up with vehicles like the ASU-57. These vehicles scoot over the map and get insta-popped by the late war behemoths, but in turn insta-kill the older heavies right through their upper front plate with their post war HEATFS and sabots. This shifted a slower, methodical armor-play mechanism to simple reflex fast aim shooting. Finally, it’s a free-to-play game with a grindy economy. And players play the game as if it such a game rather than a simulation where tankers have even the slightest desire to self-preserve.

A game that I would recommend but unfortunately is not released yet is called “Gunner, HEAT!” I think it was @komemiute that orginally spotted the title and posted about it in the games section of our forums. You can download an early demo from their website (you get access to later versions if you subscribe to their Patreon). I gave it a try and found it very cool so far. Like in War Thunder, you get an X-ray view of hits allowing you to learn the effect and effectiveness of various ammunition types versus various targets. However, these are only shown after the battle is over, making it a bit less cheaty.

There’s also a game called Steel Armor. This game simulates just the M60A1 and the T-62 but up to meticulous detail (AI’s can drive other types as well) in a variety of conflicts (Soviets in Afghanistan, Iran-Iraq war, Angolan civil war). I found the attention to graphical detail very appealing (terrain deformation, track- and suspension animation and crew interaction with the moving vehicle). It also has the potential to be the perfect single-player experience because of its dynamic campaign. You will have to get over the (IMO) brutal gameplay and somewhat clunky UI and controls to get the most out of that, though.

None of my suggestions meet the request of being world war 2 oriented. I don’t know of any appropriate title. I’ll dip my toes in IL-2 tank crew once the price comes down to a little more reasonable level. The only other suggestion I have is that the guys that made the Steel Armor tank sim made plenty of WW2 tank-oriented games (The entire Graviteam series, there’s some cold-war titles in there as well). However, those are strategy games and not tank sims.

@Sryan you precisely mention all the points in that first paragraph that did not endear War Thunder to me, indeed, even before it had tanks. Thank you for the run down on its actuality!

I have already mentioned DCS CA, but I neglected to ask something, as I do not have the particular add on purchased. WWII assets… I cannot be sure if the WWII tanks, half-tracks, and other vehicles are actually drive-able in CA. Sure, I would like an insanely detailed Panzer IV, or the likes, but the CA detail level of them would quite suffice for my purposes. If they are drive-able. Scripting and ME could do the rest.

Owning both the assets and CA does indeed enable control over the WW2 era vehicles. The implementation seems almost complete, every tank and armored vehicle (half-tracks, armored cars) I could find was drivable. Some attention to detail is present (I.E. the panzers have their historical rotating sights and they do function as such. Other vehicles I have just tested also have historical and adjustable sights).

WWII assets… I cannot be sure if the WWII tanks, half-tracks, and other vehicles are actually drive-able in CA.

Yes, that was just added this past spring.

@Sryan @Franze Excellent information, thank you for confirming this.

I started up in War Thunder this week, just to check it out.

I will certainly agree with @Sryan that meta of who is shooting at who is certainly wonky. I do however find that “simulation battles” make for a reasonable “instant action” type mission experience. Think Panzer Elite, or Panzer Commander set on moderate realism. No labels, but a mission map, and some player aides. Authenticity is midling (the “commanders position” on the M10 would have them crouch on the turret bustle holding onto the AAMG for dear life), but serviceable if you focus on the action.

Interestingly enough Graviteams Steel Armor is based on their tactical/strategic sims, with a vehicle control layer added on. If they’d do that to any of their WW2 products, I think they’d have a best seller. Well that and write some comprehensible manuals and tutorials, but youtube fills in a lot of gaps.

I’ll give IL-2 Tank Crew a good look, but right now the price is high for what it is.