Any model rocketeers among us?

Looking for suggestions for an entry level rocket kit to get for my son this Christmas. Any experiences you guys like to share?

Ha! Bought my son a model rocket years ago. Lots of research, got the whole kit from Hobbyco in Sydney. Took it to a huge park, launched beautifully (fast!), parachute deployed and the wind aloft, which was a whole lot stronger than in the first hundred feet or so, carried it off into the bush, never to be seen again.

I remember launching these when I was like 7 or 8 yrs old. Lots of fun

Here I am. So there are two parts to rocketeering. Building the Rocket and launching the rocket. If you don’t want to build the rocket or ease into that slowly, they make pre-made rockets. If you are into the building part then that is a whole sub genre of the hobby that involves working with Balsa wood and cardboard and glue. It’s pretty easy though.

The launching part will require a launch pad and aloooot of space. Like the biggest field you know about.

Estes has been the mainstay of the hobby since…I don’t know I think Von Braun and Goddard formed the company back in China…anyway they have been in it a long time. They have packages that get people started in the hobby. Here is a recommendation - 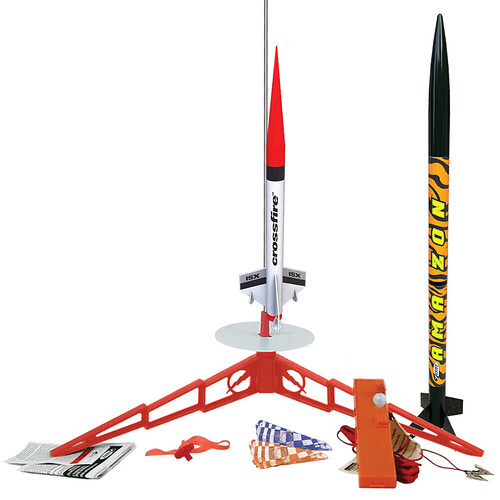 Big value and even bigger fun! The Tandem-X Launch Set includes the impressive, easy-to-assemble Amazon rocket (over 29 in. tall!) and the high-performance Crossfire ISX rocket. The Amazon builds quick with pre-colored plastic parts and self-stick...

So that is going to get you a launch pad, engines, and two rockets to build - one in balsa and one mostly in plastic for 32 bucks on their website. Shop it around. That is probably a good starting point.

You can browse all of the launch sets here:
https://www.estesrockets.com/rockets/launch-sets

From there this has always been the classic of the hobby and built by everyone who has done it including yours truly:
https://www.estesrockets.com/rockets/001225-alphar

Once you have a pad you just buy and build rockets until you are sick of the hobby, but leave them out so when friends come over they are like “umm what kind of pilot are you again Beach?”

If you get into it - you will need a lot of rockets. They never come back in the direction you want them to…

Let me know what else I can answer.

If you get into it - you will need a lot of rockets. They never come back in the direction you want them to…

That’s all great information. I think the boys would really enjoy it. (OK - me too…)

I’ll check out those links…probably pick something up from Amazon Prime (maybe they can launch it in a rocket to me!)

Launch pad safety has to be taken seriously so its a great teaching moment.
The launch itself is the most exciting 40 seconds you can have on a weekend. Basically you are applying science to fireworks. A good time is guaranteed.
Chasing the damn thing down is an adventure that can, and usually does involve giant trees, power lines, other peoples dogs, and most of all other peoples property.

Bring your drone and record the launch from height like NASA does.
Bring a bluetooth speaker and play the 2001 theme
Walky talkies can enhance the chase of re-entry

And for over the top fun -

If you have a friend who has a motor boat on a lake or the ocean, bring your rocket box. Set the pad on the bow of the boat and launch navy style. Then chase the rocket with the boat! Much easier, much faster, lakes and oceans have a lot of space, and if it lands in the water it floats so no biggie. You just have to convince your friend it won’t damage his boat. Beer helps here.

When I was a kid my dad and I had a great time with rockets. We had tow farms and gobs of acreage. Even so, we lost most of what we launched. As a kid, this is the equivalent of an online IL2 mission when you get 2 kills in a 1v2 fight only to get flamed just before you RTB. So my favorite wasn’t the big 2-stage stuff, it was the “Scout” (IIRC (42 years ago)). This little rocket used the smallest engine and had no chute, just a hole in the side to make it tumble on descent. Honestly, we lost them too. But much less.

Yeah I always liked single stage so we could keep an eye on it. If you do it enough you learn tricks like using a paper hole puncher on the parachute to get them to drop quicker without getting too much damage.

That’s very interesting. Are there any models doing the SpaceX trick a.k.a. vertical landing?

So not being the most handy assembly-person in the world (I’m pretty sure my rocket would come apart about .2 seconds after ignition)…I went with the least possibility of disappointment for my seven-year old and selected a largely pre-built rocket. (I’m pretty sure there is still room for a Mudspike Space Logistics emblem on the side…)

Does the rocket push for power?

Does the rocket push for power?

My uncle got me into model rockets back in the day. It wasn’t for school or anything, it was just because why not? They’re so fun to watch. I might get back into it at some point.

This was my entry into the sport of model rocketry:

Of course back then it was just the “Alpha” rocket

It comes with the launch set but rocket engines are evidently separate. Easy to build and fun to “fly”.

You note I call model rocketry a “sport”…because it normally involves a lot of running (to see where it went) and often tree climbing to retrieve the rocket.

On my second launch of my Alpha, it got ensnarled in tree branches too high to reach. Ironically the tree was in plain sight of my bedroom window. Every morning I would look out and check on it. Just over a year after launch, I awoke to find it missing. I hurried over and found the parachute lines had finally succumbed to the elements and my Alpha had finally returned to Earth.

Technically, over 365 days in very, very low orbit…that’s got to be some type of record.

Oh look, they finally added a safety protector to cover the tip of the launch rod when not in use…previously, truly, the original “you’ll put your eye out kid” despite what was said in A Christmas Story.

The little ribbon is a nice touch to help determine wind speed and direction…at an altitude of 2 ft AGL…as was previously mentioned, winds aloft tend to be different. 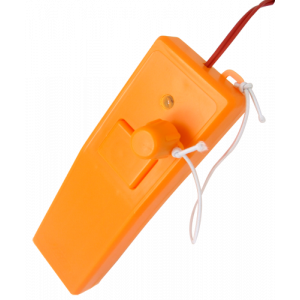 The safety technology built into the hand-held launcher is mind boggling. It just won’t fire the rocket without the launch key (or a bent paper clip if you lost the launch key).

Gosh I loved model rocketry. In fact I’m pretty sure that I dragged that launch kit with me for several PCS moves after I was in the Navy.

Of course back then it was just the “Alpha” rocket…

Good choice. High vis orange. I’m going to paint mine green to really add to the challenge for the childrens (sic)… Daddy needs a few hours of DCS time and they need to spend some time in the woods.