Anyone have thoughts on the announced Nvidia RTX 20XX line

Looking like a significant step forward in technology (and price): 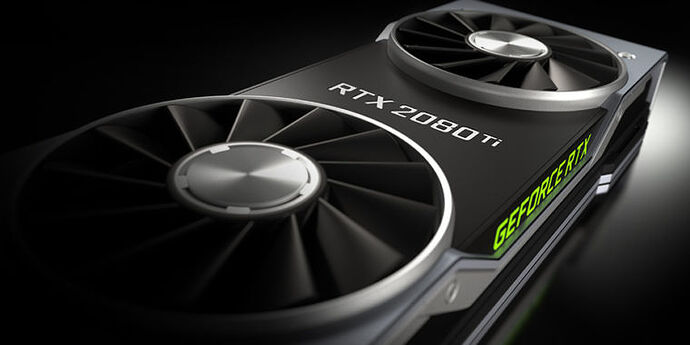 Nvidia RTX: Everything you need to know about ray tracing, DLSS and Nvidia's...

Nvidia's RTX graphics cards are finally here. Here's everything you need to know about ray tracing and DLSS as well as RTX prices, specs and performance.

These cards also have the VR USB-C VirtualLink port on them (as far as I understand it) which will be available in the next gen of VR devices.

I might have to settle for the regular ole 2080 - I am thinking that I might need a motherboard/CPU/memory upgrade coming in 6-months or so.

Didn’t really pay attention to the new features in the new cards until I saw the BF5 tech demo. Wow. My thoughts on the prices:

New texh is always exciting!
I will upgrade my 1080TI when favourable reports are in…

On the other hand…

From the articles I read it sounds like the 2070 will be slower than the 1080
Except in raytracing (which most games don’t do and probably won’t do for quite a while) or with very high resolutions (useful for VR maybe). While being a lot more expensive.

So for me it is still questionable if they are worth the 200€ price difference.

Oh, and one thought that just came to mind:
Pure computing power of the 2080ti will allegedly be… 14 Teraflops. (FOURTEEN)

That would land a single GPU of today in the top500 super computer list of 2008. Holy crap.

I wonder why they didn’t include more VRAM on the new cards. I had kinda expected to see at least the 2080ti at something like 16 or 20 GBs of VRAM.

11GB is the same amount the 1080ti has. Probably the faster RAM is either so expensive that they don’t want to include more (in the first edition at least) or they expect VRAM use to not grow that much anymore?

Well, six to twelve months from now we will probably know, when the second edition is released.

Man, I can’t wait to see the benchmarks. Depending on how much the faster VRAM matters, that 2070 might actually be worth the cost…

I think that the VRAM is of a new and wildly more expensive variety. That is what I am reading as to why the price is so high. They were aiming for the same price as the previous gen. But that could be all just smoke.

GDDR6 is more expensive and larger amounts are probably unneeded in most scenarios.

The main issue is they talked and talked at length about raytracing (which to be fair is a new/old exciting direction) but said almost nothing about performance in traditionally rendered games. I’ve seen a bunch of WAGs on various sites, but no one has a board in hand with the release day drivers installed to test them.

Expect a large number of interesting articles when that happens, but until then we can only assume the performance will be better. The question is just “is it a big enough improvement to make it worth buying now?”

Exactly.
I kinda expect the new cards to be faster, even in traditionally rendered games, but probably more in line with what we are used from the past, the ranking being roughly like this (fastest to slowest):

new80ti
new80
old80ti
old80
new70
old70ti
old70
new60
old60
…and so on. With an average gain in speed of 15-20% tops, the new cards being a LOT faster in some rare situations (such as when using some new technology close to nobody has in their games for the next two years)

It could have potential for flight sims, though. It could help with calculations for radars and allow for better mirrors. Shadows could become nicer as well.

If that tech could be harnessed (hijacked? perverted?) into doing LoS calculations for radar, AI and IR sensors, that would be sweet. Truly sweet.

But that aint happening until everybody can be counted on to have the tech, so say ten years or so.

On the gripping hand, in ten years, I will still be alive, and able to enjoy it so yay!

Yeah I think it could turn out to be really good, but as @schurem said: Not quite yet though.
Although I would probably say that if it works as nicely as the marketing guys want to suggest, then it will be in many games more quickly than one would think. Two to four years I guess.

Physics based rendering also spread faster than many people thought, just because it is that great for developers.

I’ll probably preorder a 2080ti. My reasoning is that yeah, although it’s the same price as an entry level iMac, I’ve gotten 2 years of hard use out of my 1080, they tend to hold their value (a 1080 is about the same price now as when I bought mine), and it will be some time before the 2080ti becomes obsolete. So, in terms of gaming rig hardware purchase value, I’d say that you can make a good argument for either the 2080 or 2080ti. As much as we hate what cryptocurrency has done to the GPU market, at least it has kept the ROI of your current card high. If I can recover some of the 2080ti cost by selling my 1080, then all the sweeter.

As a current 1080ti owner, I think I’ll wait this gen out. My next leap in tech will be once VR headsets like the Rift offer a Gen 2, I’ll see what vid cards will be out at that time and will do both upgrades at once. As it sits right now, I feel like my 1080ti eats everything I have at it for lunch and until the visuals improve in VR headsets throwing more vid processing power at my current headset won’t offer much of a noticeable upside.

If I owned a 1080ti, I’d probably do likewise. If memory serves, the 1080ti was released almost a year after the 1080, which sort of sucked for owners of that card. Glad that NVidia is more or less releasing all versions concurrently this time.

New texh is always exciting!
I will upgrade my 1080TI when favourable reports are in…

It is exciting, however I’m a little more conservative about upgrade…last year I left my Commodore-64 for an Intel 8088 30 Mkz powered PC with a 30 MB hard drive! Looking now for a good 1200 baud modem…

My next leap in tech will be once VR headsets like the Rift offer a Gen 2, I’ll see what vid cards will be out at that time and will do both upgrades at once.

I’m still using TrackIR (and getting very frustrated) - however, I think I’ll also wait for the next gen VR comes out.