This came up on one of my twitter feeds as this happened this week in 1971.
I just think the photo is cool. 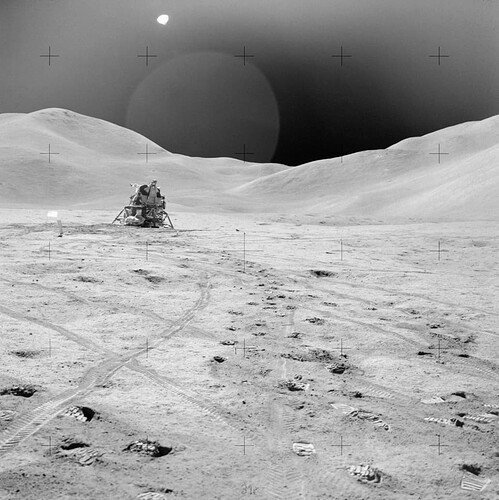 Oh it is. I could stare at it for hours. And … down the rabbit hole I go

EDIT: Some text for the above picture from: Astronomy Picture of the Day - 22 Feb 1996

Explanation: The lunar module shown above, named “Falcon,” served as home for Apollo 15 astronauts David Scott and James Irwin during their stay on the Moon in July and August 1971. Meanwhile, astronaut Alfred Worden circled in the command module overhead. Harsh sunlight on the grey lunar surface lends the image an eerie quality, while the Lunar Apennine Mountains frame the background with Mount Hadley Delta visible on the right. Visible in the foreground are tracks from the first Lunar Roving Vehicle, an electric car which enabled the astronauts to explore extended areas on the lunar surface. Apollo 15 confirmed that most lunar surface features were created by impacts. Rocks returned by the Apollo 15 crew included green glasses whose formation mechanism is still unclear

That’s an awesome photo. It’s amazing the level of detail that Kubrick put into the soundstage for filming the landings.

I mean, it’s a known fact that for this one, he insisted on shooting on location, to get the lighting right.