So with the boys soon getting LAN cable run to their room, I need a solution on how best to divide up the incoming cable signal to all interested parties. I already had a 4-way switch (hub?) or whatever it is called because I had LAN cable running to my PC, my wife’s PC, and my Denon receiver. Do I just need to go buy a larger (like 8-port) switch? Or should I consider upgrading my WiFi router and are there ones that come with like 6 or 8 LAN outputs that come straight out of the router? FWIW - I’m on regular Spectrum internet via coaxial cable line. Just looking for the least hassle and most technologically correct way to do this. 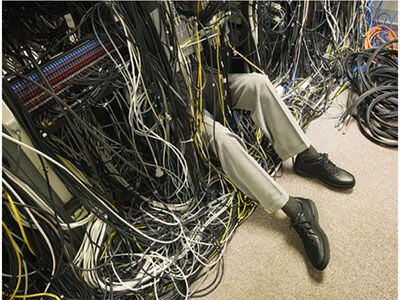 I’m assuming you mean restrict the amount of speed they get access to, so you have guaranteed speed elsewhere?

Controls like this are controlled in a router. You current router may support it. Either via MAC or IP address.

I’m assuming you mean restrict the amount of speed they get access to, so you have guaranteed speed elsewhere?

No…not necessarily. I was just mostly looking for efficiency in distributing the signal via the least amount of daisy-chained components I suppose.

And my current router is a Netgear C7000v2 - which according to Spectrum is good for signals up to 400Mbps. As far as I know, we don’t ever exceed that…

Ok, so if you’re not that fussed about controlling bandwidth and it’s only giving access, a switch is fine.

I forgot to mention that the reason I bought the 4-way hub thingy was because I also have a home networked NAS (Synology) and an internet phone (Obi or something). So I exhausted the output jacks on my C7000v2.

Just get an 8 or 16 port switch. It’s literally just an extension/hub for the Ethernet signal.

It’s really handy as you can daisy chain them, providing you have enough spare IP addresses in the DHCP pool.

Yes, an unmanaged 8 port gigabit switch will do. Netgear has models below 30 bucks.

Unmanaged means no software shenanigans, so less vulnerability and cost. For a while now these things come without a fan that could break or cause noise.

The most important feature is two keyholes so it can be nailed to a wall.

Switch is the keyword.
Switches direct traffic between the participating parties to that data.

A Hub broadcasts traffic it receives on a port to all other ports which clogs up traffic and can lead to other problem.

If you need a cheap switch, go unmanaged (managed switches let you tune things and can even act as routers) and shop around. I have had good luck with TP Link’s unmanaged switches, they are very reasonably priced. Use a couple at home and the office.

I used tp link adapters for the farmhouse, plug into wall sockets pair them and your good to go. 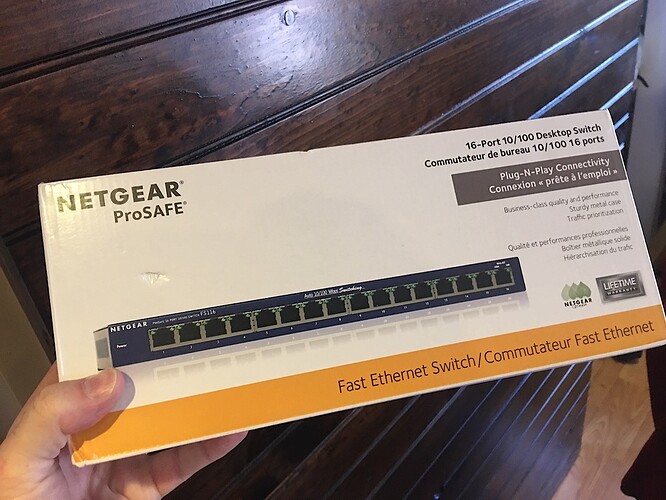 Welcome to the FAST lane!

So if you internet is faster than that, any device connected to that switch will be capped at 100. It also means if you connect all the PC’s to it, and then it to the router, the combined total of usage is capped at 100.

If your internet speed is less than 100 then you have only one caveat - if you transfer a lot of data between PC’s on the LAN it will be capped at 100 instead of Gigabit (1000).

That is 100 at the port. So two PC’s can transfer between each other through it at full 100 while another PC downloads from the internet through it at up to 100. The total internal switching traffic capacity is much higher (and marked in the specs).

However!
Outside of large file transfers between PCs, it won’t slow the LAN down in any other respect. It’s not going to be higher ping or anything noticeable outside those situations mentioned. So if none of that really applies to you, then no concerns.

I just ran some speed tests and it looks like Spectrum is delivering about 110-115 Mbps…so maybe not enough of a difference to warrant changing to a higher speed switch?

Likely not. If anything, connect the more demanding machines (yours perhaps) directly to the router to get the extra percent in use. Should be fine.

I’m surprised they still sell these. Gigabit network is great if you copy data between machines in your LAN a lot. Like backups to a NAS. It will not be 10 times as fast, but maybe 3 to 5 times or something. More importantly it’s harder to saturate, so if a backup is running, your kids online game will not suffer. So it’s really up to your use case, a 100 Mbit/s switch might be just fine if all traffic is headed outbound to the internet.

Edit: Ups, I did not see Wes’ post. He wrote all of that already.